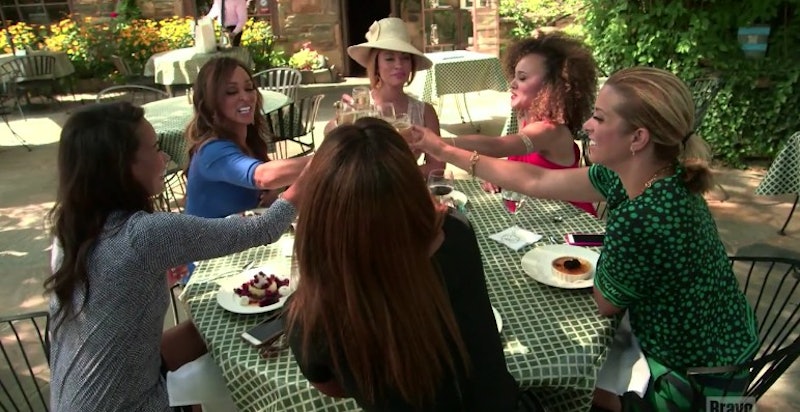 Can't get enough of rich ladies in beautiful locations? No one knows that better than Bravo, which is why the network is rolling out not one but two new additions of The Real Housewives franchise. The Real Housewives Of Potomac and The Real Housewives Of Dallas will join Bravo in 2016, and the former is coming to the network a lot sooner than one might expect. While we will have to wait a while to see the drama unfold in Texas until the end of 2016, Bravo will be launching The Real Housewives Of Potomac early in the new year on Sunday, January 17. That means that you can start the new year with a brand new reality show to marathon — one that might remind you a whole lot of those other rich lady shows that you love. Get ready to meet a new crop of women for you to get entirely too invested in the private lives of.

While The Real Housewives Of Potomac is certainly very similar to the other shows in the franchise (we're talking plenty of yacht parties and side-eyes) like all of the shows, it also has its own unique angle that makes it stand out from the rest. Bravo just released a trailer for the new series, which sheds some light on what to expect from the reality show. Here's what we know about The Real Housewives Of Potomac:

1. First Of All, Potomac Is In Maryland

If you haven't heard of the village, it's because the residents want to keep it a secret. (I mean, probably not the people who wanted to do a reality show about their lives within it, but whatever.) The extremely affluent community is just outside of Washington, D.C.

2. It's A Country Club Lifestyle

Forget the beach clubs of Orange County or the music scene of Atlanta: these ladies are all about golf, horseback riding, and tennis when they're not snarking on one another.

3. The Focus Will Be On The Small, Exclusive Community

Which seems to consist of a small community of African-American residents, whose lives will be highlighted in the series. This is great, because it means more diversity for The Real Housewives franchise. The new show will follow the lives of the wealthy African-American women in the village, including socialite Gizelle Bryant, TV personality Katie Rost, grand dame Karen Huger, "social butterfly" Charrisse Jackson-Jordan, publicist Robyn Dixon, and restaurateur Ashley Darby. Several scenes in the trailer show the women openly discussing race, proving that it's not all luncheons and passive aggressive shopping trips for them.

Well, at least, they talk about the importance of staying classy. The trailer shows them getting drunk on boats a lot.

5. Lots Of Action Happens Over Lunch

Heated discussions happen in huge hats and over salad.

6. According To A Housewife, "New Money Is Good, But Old Money Is Better."

That's a direct line from one of the housewives, which hints that the new money wives are the odd girls out this season.

7. Even The Kids Learn The Importance Of Etiquette

Potomac is really heavy on the etiquette, especially the lesson about "being nice to your enemies." Because when you live in this town, you seem to develop a whole lot of them.

Check out the trailer for the new series over at Bravo's website, here.