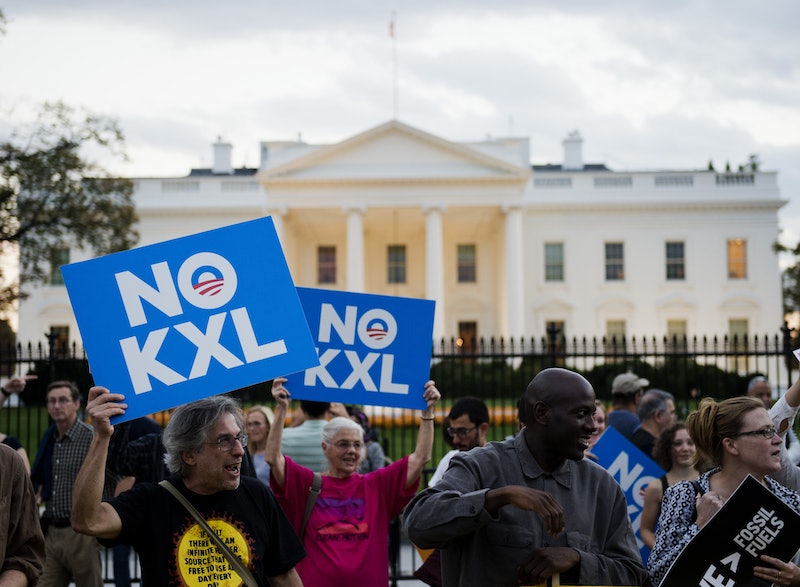 On Monday, environmentalists across the country notched a major win — President Obama rejected the construction of the Keystone XL oil pipeline, the culmination of years of controversy, activism, and advocacy. It's a move that's already been blasted by the Republican Party, which views the pipeline project (which would've carried tar sands oil, a particularly dirty type) as a no-brainer, and considering there's a presidential race going, you know you haven't heard the last of it: even with Keystone XL rejected, both Democrats and Republicans need to keep talking about it.

Few environmental issues have commanded as much mainstream media attention as the Keystone XL proposal has, by virtue of its potential impacts on the environment and economy, and the different things it represents to conservatives and liberals. For the American right, which has never been shy about sticking up for dirty energy on economic grounds, it's a crucial leg of the oil transport infrastructure between Canada and Louisiana, one that'll ostensibly produce a bevy of new jobs. For the environmentally aware progressive, however, it's a needless safety hazard that will exacerbate climate change, intrude on sovereign Native American land, not create nearly as many jobs as advertised, and move America in the opposite policy direction of where we should be headed.

In short, the political opportunities will be ripe going forward for the Republicans. There are still a whopping eight debates left on their side — a combined 16 or so more hours of time, in other words, to chastise the Obama administration, and grandstand about the pipeline's economic effects.

For some perspective, as PolitiFact detailed, the GOP often trumpets the number 42,000 as far as Keystone's jobs impact goes, but that's both overstated, and referring to temporary construction jobs. As far as long term jobs are concerned, the project would only create a few dozen. Furthermore, the economy under the Obama administration for the past several years has been adding hundreds of thousands of jobs a month, all without the additional burden of a massive, intricate, environmentally dubious oil pipeline.

With the Republican primary field so obviously desperate for things to attack the Democrats about, rather than firing at each other (essentially, this was the entire subtext of the fourth GOP debate), it's not even a question the Democratic Party is going to be challenged on this all election cycle long, and that means progressive politicians are going to have to stand behind Obama's decision. Because if anything's a proven political non-starter, it's trying to run against Obama — if voters can't trust that a candidate is their own person with their own views, no amount of running away from a sitting president is going to change that.

In short, the Republicans need to keep talking about Keystone because they need to talk about anything that isn't insular infighting, and they clearly perceive this issue as a winner. And in politics, you can't always have the benefit of picking your fights — if the Republicans press the issue, then it's suddenly the Democrats that need to keep talking about it. Expect to hear this come up during the upcoming Democratic presidential debate on Saturday, and a whole lot more during the next Republican debate on December 15th.