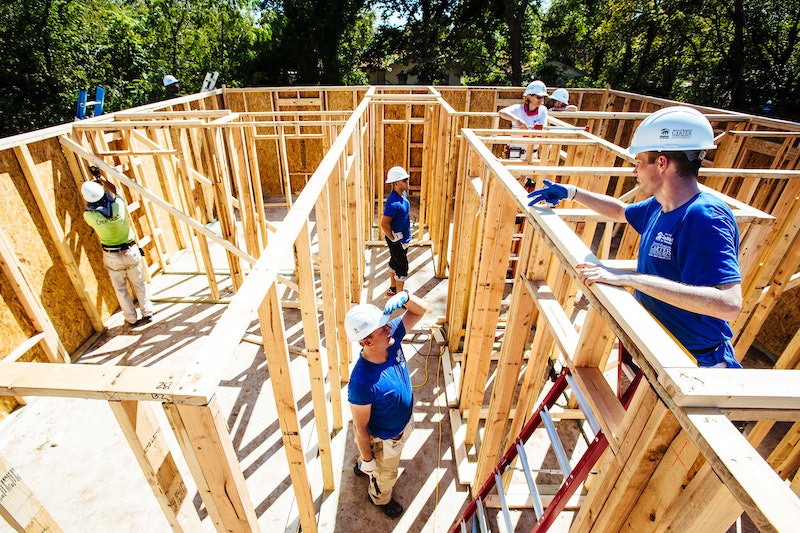 Each year, approximately two million volunteers help Habitat for Humanity build a safe place to live for hundreds of thousands of families. Around one in four people around the world live in poverty-level housing, a statistic that Habitat directly wants to impact. Although you've probably heard of Habitat — you may have even volunteered through a program at your office or to round out your college applications — there are at least five big things that you might not already know about Habitat.

On the surface, Habitat seems like a simple concept: The organization finds volunteers to help build houses across the world for low-income families who lack safe shelter. In reality, this definition is much too simple for an organization as extensive and well-established as Habitat. The organization has been around for nearly 40 years, during which it has built homes for more than one million families or nearly seven million people — but that's just the beginning. Habitat has developed local chapters, called affiliates, across the country and around the world to maintain support and charitable work at the community level. It also advocates for legislation that will improve the local housing market for low-income families and provides disaster relief resources in areas where they are desperately needed. In 2015, Habitat was named the social services and nonprofit brand of the year by the annual Harris Poll EquiTrend study, which measures the brand equity of more than 1,400 organizations across 148 categories.

As Habitat continues to grow and diversify its services, support for its programs becomes more and more important. Fortunately, there is no shortage of reasons or ways to get involved. Ultimately, both can be explained through several common misconceptions that the organization works continuously to dispel.

1. Habitat Does Not Give Houses Away For Free

"The most common misconception about Habitat is that the houses are given away," Alice Jacoby, partnership manager with Habitat for Humanity's chapter in Orange County, North Carolina, tells Bustle. "Habitat homeowners make a monthly mortgage payment to Habitat and also pay closing costs." Make no mistake, there's still an economic advantage to owning a Habitat home. Homeowners don't pay interest on their mortgages and the payments are priced affordably, relative to a family's income, Jacoby says. In most cases, families make a $500 down payment on their house and pay a monthly mortgage payment of no more than 30 percent of their monthly income.

In addition to a mortgage payment, Habitat homeowners pay for their home by investing what Habitat calls "sweat equity" into the home. In order to qualify for a Habitat home, potential homeowners typically have to show they've lived or worked in the community for at least one year, have proof of income within a set range, and must commit to serving approximately 325 hours on the job site, building their very own house alongside a team of volunteers, Habitat employees, and contractors. This stipulation for sweat equity is as important to Habitat as the requirement that homeowners pay a mortgage — but it's not meant to make the process more difficult for homeowners. Rather, it's meant to help them create a sustainable future for their families.

"The idea of sweat equity is at the heart of the Habitat philosophy of [providing] a hand up, not a handout," Jacoby says. "I think the sweat equity model is important in relation to a prevalent cultural bias that people who can't afford a decent place to live — or more generally, people in poverty — are somehow responsible for their own situation due to a lack of motivation or willingness to work hard. Habitat homeowners shatter this stereotype every day."

The money that Habitat homeowners pay through their monthly mortgage payments goes toward funding other houses. Through affordable mortgage payments and sweat equity, Habitat is better able to sustain its vast operations, and homeowners can become invested in their community and take pride in the better future that they have literally built with their own hands.

Perhaps more important to Habitat than ending homelessness is emphasizing the need for affordable housing. As the cost of living continues to rise and the minimum wage stays relatively low, Habitat argues that a full-blown, global housing crisis is in effect. In other words, it's not just the homeless that we need to worry about; it's also families who have housing but are left to pay a disproportionate amount of their income for basic shelter. In most cases, Habitat homeowners aren't homeless — they might live in a home that's too small or crowded for their family, they might live with relatives, or they might live in a home they can't afford.

"Affordable housing is defined as spending no more than 30 percent of your income on housing," Jacoby explains. Because Habitat doesn't give its houses away for free, homeowners must prove that they have a steady income, even if that income puts them below the poverty line (which it often does). Although the exact income requirements differ from community to community, the typical family of four who qualifies for a Habitat home in Orange County, North Carolina (a county that includes cities across the central Piedmont region of the state), makes between $20,340 and $40,680 per year, according to Jacoby.

Affordable housing is Habitat's main legislative priority, as well. Each year, the organization hosts a legislative conference called Habitat on the Hill, which brings together Habitat employees, volunteers, homeowners, and advocates. Habitat representatives meet to discuss the year's priorities in legislation and affordable housing, as well as meet with lawmakers to call for action.

Carter and his wife, Rosalynn, have become two of the most recognizable supporters of Habitat over the years, but they did not actually create the organization. About this misconception, Jacoby says, "[It's] not true, but he did bring great visibility to Habitat's work!"

Habitat was founded in 1976 by Millard and Linda Fuller in Americus, Georgia. A Christian organization from the start, Habitat grew out of an idea from the Fullers and a biblical scholar named Clarence Jordan. In 2005, the Fullers established a second, similar organization called The Fuller Center for Housing. The Fuller Center follows a similar business model to Habitat, setting affordable repayment terms for homeowners and remaining faith-based at its core.

For his part, Carter became involved with Habitat shortly after its launch. According to Habitat, the Carters' involvement began in 1984, shortly after Jimmy's presidency, when he led a work group to New York City to renovate a six-story building that served 19 families in need. Now 91 years old, Carter still participates in Habitat builds, even while he battles brain cancer.

Additionally, the Carters have led at least one work trip every year since 1984. Known as the Jimmy & Rosalynn Carter Work Project, the trip helps to raise awareness about Habitat's global efforts and inspire enthusiasm around the opportunity to volunteer (because who wouldn't volunteer alongside a former president?). Although this year's trip to Nepal had to be canceled due to safety concerns in the region, plans are already underway for a 2016 trip to Memphis.

4. You Don't Have To Be Handy To Volunteer

Think back to that episode of Gilmore Girls when Rory and Paris build a house for charity. Whether you identify more with Bob the Builder or Rory Gilmore, you can definitely support Habitat, even if you don't have the construction skills you think you'll need. Surely, the most obvious way to join the cause is to sign up for a build. To do so, you'd register with your local Habitat affiliate.

"Habitat affiliates are always looking for people to give a few hours of their time," says Jacoby. "Many people have never had an opportunity to participate in a hands-on trade like construction and can be intimidated by the idea, however no experience is often the norm at Habitat builds." To find an opportunity to build near you, you can search Habitat's U.S. locations online to identify the appropriate local affiliate.

5. You Don't Even Have To Build To Volunteer

Contrary to popular belief, Habitat doesn't just build houses. The organization is also involved in legislative advocacy, disaster relief, neighborhood revitalization, and international housing finance. Whether it's in the United States or abroad, Habitat's efforts always work toward furthering the supply of affordable housing — but that doesn't always mean building a house from scratch.

For instance, Habitat provides affordable loans and volunteers for homeowners who don't need a whole house, but rather just a critical repair or renovation. Similarly, when a tragic and devastating earthquake rocked Haiti in 2010, Habitat implemented ongoing disaster relief efforts. As of 2015, Habitat has helped more than 55,000 families in Haiti as a result of relief efforts. Habitat also provides research about the ongoing problem of affordable housing. The recently released 2016 Shelter Report, for example, looks at gender inequality in land ownership around the world. The report will inspire Habitat's 2016 efforts to include an emphasis on advocating for and working toward gender equality, particularly as it pertains to home and land ownership.

With that being said, there are plenty of other ways to support Habitat and its efforts around the world besides spending your Saturday on a build site. There's even a specific program for young professionals. Aptly called Habitat Young Professionals (HYP), the program connects individuals under the age of 40 in more than 50 communities across the country, according to Angela Giles, public relations specialist for Habitat for Humanity International. Members of the HYP program contribute to Habitat's educational, fundraising, and advocacy efforts by working together on projects. The program caters specifically to recent graduates who may have just moved to a new city and are looking for ways to get involved around town and meet new people.

The HYP program also provides young professionals with opportunities for leadership and skills development. Members are invited to the annual Habitat on the Hill event, as well as an annual Young Leaders Conference. To learn more or get involved, you can email HYP@habitat.org or subscribe to the Habitat Young Professionals Update newsletter.

Now for a personal note: Habitat builds are a great way to meet people in your community, learn a new skill, and give back to a family in need. I participated in several builds during college with the Habitat affiliate in Orange County, North Carolina, and I was able to learn about the home-building process and see new parts of the community. I worked alongside fellow college students, and we often built houses for employees of our university. There's something truly rewarding about kneeling on a roof and nailing shingles next to the husband and wife who will soon raise their children in that very home.

Just as no global issue exists in a vacuum, no global nonprofit organization should operate in a narrowly defined space. Habitat for Humanity International has grown over nearly 40 years to expand to new countries, launch new programs, and help new audiences. You don't have to build a house to help Habitat, but if you do, I promise it'll be one of the most rewarding experiences of your life. (And trust me, if I can nail shingles to a roof and lay subfloor, so can you.)