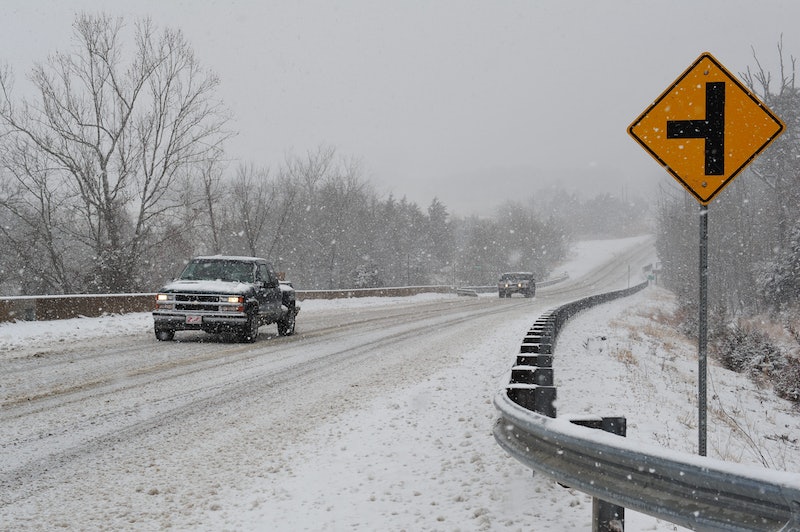 A serious storm is really brewing in the Midwest this week, according to NBC News. All puns aside, the November Witch will bring strong winds, snow, rain, and even tornadoes to the Upper Midwest, including the Great Lakes region and the Ohio Valley. So far, the storm has already created 10 tornadoes; it has flooded streets in Iowa, Nebraska, and Missouri; and it brought a foot of snow to some parts of the Rocky Mountains, according to NBC. And the witch isn't finished just yet.

The storm received its name because it's as powerful and around the same time as previous last fall storms that are historically called the "witches of November," according to the Weather Channel. This November Witch is also on almost on the exact same date as a witch of November that sunk the Edmund Fitzgerald, an iron ore freighter, about 40 years ago. What makes these diabolical storms so magically powerful? Meteorologists say they are created when air with very low pressure clashes with a pocket of high pressure, according to NBC. The pressure of wind, which is shown with cyclone-like drawings, was so great over the northern part of the Rocky Mountains that winds gusted at speeds of 60 mph Wednesday night, according to the Weather Channel.

The National Weather Service reported 10 tornadoes, but only one was confirmed Wednesday, when it touched down in Avoca, Iowa, with wind speeds of up to 110 mph, according to NBC New. Utah, New Mexico, Wyoming, Colorado, Nebraska, Kansas were hit with a heavy, blizzard-like snowstorm, according to the Associated Press. Stephen Corfidi, a meteorologist at the Storm Prediction Center in Norman, Oklahoma, told the AP that the worst of the storm has likely passed. He described these mid-November storms as a "one-two punch," according to the AP:

Basically there's a warm side and a cold side to these systems, and the unifying threat is a very strong wind field all the way around it. So on the cold side, you have a chance for snow or freezing precipitation accompanied by very strong winds and occasionally blizzard conditions. ... On the warm side, the thunderstorms that grow in the strong wind environment tend to rotate. And if they rotate long enough, and if the moisture is great enough, they can produce tornadoes.

For Thursday, the storm will travel from Wisconsin to northern Ontario, according to the Weather Channel. Strong winds will concentrate in the Great Lakes region, the northern Plains, the Ohio valley, and the north parts of the Mississippi and Missouri valleys, according to NBC News. Parts of these areas could experience some snow.

The storm will be mostly gone by Friday, but what's left of it could travel as far as New England, causing high winds. A few more inches of snow could also build up in areas surrounding Lake Superior, according to NBC News. Then the witch will pack it up and fly on out — at least until next November.

More like this
Why Experts Say Sleeping With A Fan On Isn’t Totally Risk-Free
By Sophie McEvoy
The 6 Best UV Umbrellas, According To A Dermatologist
By Rachael Green
The 8 Best Indoor Door Mats For Your Home
By Jenny White
These SUPER Clever Things Under $20 Are Taking The Internet By Storm
By Julie Peck
Get Even More From Bustle — Sign Up For The Newsletter