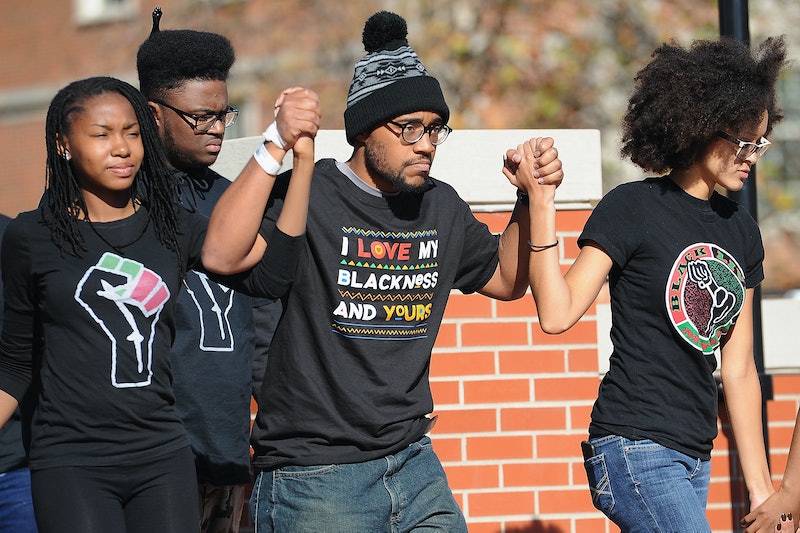 Jonathan Butler, the Mizzou student who went on a hunger strike in response to racist acts at the school and his belief that the system president failed to adequately respond to those incidents, has been "outed" as rich. The St. Louis Post-Dispatch reported on Wednesday that Butler is the son of a railroad vice president from Omaha, Nebraska. The Post-Dispatch further reported that Butler's father, Eric L. Butler, was compensated more than $8 million dollars in 2014 for his position with Union Pacific Railroad. Some on the right wing are having an absolute field day with this information, claiming that Butler is a "fraud" for going on a hunger strike to protest against the oppression of students of color at his school. Yes, Jonathan Butler's family is rich. But so what?

Critics are all over Twitter and are publishing essays claiming that Butler had no right to protest against oppression, given that he is from a prominent and wealthy family. Their commentary criticizes Butler in light of his father's income and insinuates that Butler's hunger strike was hypocritical given that his family is wealthy.

But all of these critics seem to be missing the point that Butler and the students at Mizzou were not protesting specifically about economics or finances, nor did Butler ever claim to be low-income during the protests (even if this was more of an Occupy Wall Street protest, there's no reason why an upper-class student couldn't stand in solidarity with low-income students). Throughout the fall, Mizzou students have been protesting racial oppression and discrimination on campus, not protesting financial oppression.

Somehow, and I'm not sure how, Butler's critics are equating financial wealth with freedom from race-based discrimination. Yes, Butler is rich, but does that mean it's not possible for him to be oppressed because of his race? Not at all. Money is a financial currency that absolutely allows for certain privileges, but in our society, wealth and status do not in any way exempt a person of color from being victimized by racism.

There would absolutely be some irony and hypocrisy at play if Butler had gone on a hunger strike because he was claiming to be oppressed due to a lower-class standing. But this just wasn't the case, and claims that Butler can't experience and protest against race-based oppression because he comes from a wealthy family miss the point of his protest entirely. The protest, according to Butler, was about the failure of the university to keep the campus a safe space for black students, not about the financial plights of students.

Butler began his hunger strike as a call for the university system's (now former) president, Tim Wolfe, to step down after handling racial tension at Mizzou in a way that was unsatisfactory to student protesters. What does money have to do with this at all? Because Butler is wealthy, he was somehow immune to racial discrimination? Did his money somehow make him safer from racial threats than other students with less money? No, that isn't at all how racial discrimination works. You can't buy the privileges that whiteness affords.

Coming from money certainly means that Butler is likely to have experienced certain privileges, such as freedom from student debt, the opportunity to attend high-quality schools, etc. But no matter how much money a person of color's family has, that wealth is never accompanied by the privilege of being white. In our society, there's the monetary currency of dollars and cents, and the social currency of race. As it stands now, white skin paves the way for social privileges that are not given to people of color. Butler's family has a lot of money, but that doesn't mean society has necessarily treated them fairly.

Overall, this fixation on Butler's financial background is just another way to attempt to de-legitimatize the concerns of Mizzou's student protesters. Ultimately, cash flow has no relevance to his complaints against the school, nor do they have any bearing on the reasons for his hunger strike. It's merely another way to dismiss the very real racial discrimination that people of color experience every day.