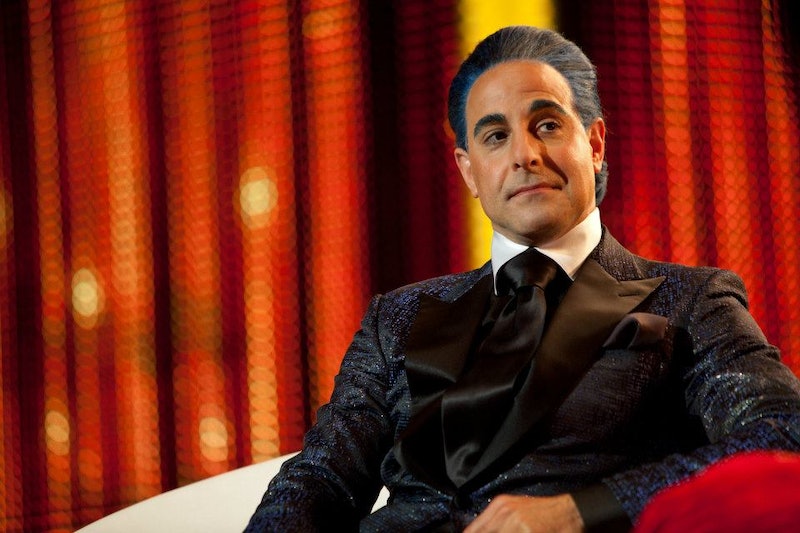 As the final Hunger Games: Mockingjay Part 2 brings the franchise to a close, fans will certainly miss seeing all of our favorite characters — Katniss, Peeta, Gale, Effie, Haymitch — on-screen. And of course, there's Caesar Flickerman (played by the brilliant character actor Stanley Tucci), a flamboyant host who's a candy-coated hybrid of Andy Cohen and Ryan Seacrest. For worried fans wondering about what happens to Caesar in Mockingjay and how his fate plays out, fear not — the beloved character survives. Well, maybe.

Despite being in a franchise that has a ridiculously high body count, it seems that Caesar manages not to die in the final installment, although it's never exactly said one way or another. It's assumed, though, that since his deathis never mentioned, he makes it out alive. His role in the Games, meanwhile, fades out at the end of Mockingjay after he inadvertently helps deliver an important message to Katniss and the rebellion, through a series of televised interviews with Peeta, who has been captured, tortured and brainwashed. In an emotional one-on-one, Caesar asks Peeta about Katniss, and the struggling tribute sends a message to her to not trust the people who are making her film propaganda TV spots. Things turn crazy when Peeta says the war should stop and warns the rebellion that the Capitol is going to bomb District 13... and then he gets dragged off screen and beaten. Not exactly a happy ending to an interview, but Peeta got the message out there. And it wouldn't have happened if it weren't for Caesar's questionable hosting skills.

Caesar is like the "chorus" of the movie, providing commentary as if he were on the sidelines of the Macy's Thanksgiving Day Parade. He is the Hunger Games hub that disseminates the information to the public — but he is more than just a pretty face. He is a conduit in a powdered wig for valuable information about the story, and he molds each tribute into a "character" for the games so that they get supporters and fans.

Caesar may be a garish and obnoxious, but his role in the Hunger Games franchise is surprisingly important. Without him, the rebellion wouldn't get the information they need to know. Where his alliances lay is unknown; it's never quite clear whether or not he is for or against the tyrannical institution of the Capitol. Personally, I would say that he is against it, but in the end, he remains impartial. And while that's morally questionable, he's a better journalist because of that.

While it's never said exactly what happens to Caesar after the Peeta interviews, here's hoping all ends well for him. If author Suzanne Collins decides to churn out a couple of spin-off novels, then the franchise might see a new movie life similar to J.K. Rowling's Fantastic Beasts And Where To Find Them, and perhaps Ceasar could play a part, whether alongside the "Girl on Fire" — a name he coined — or on his own. Either way, it'll be a relief if the fantastic host makes a Hunger Games return.