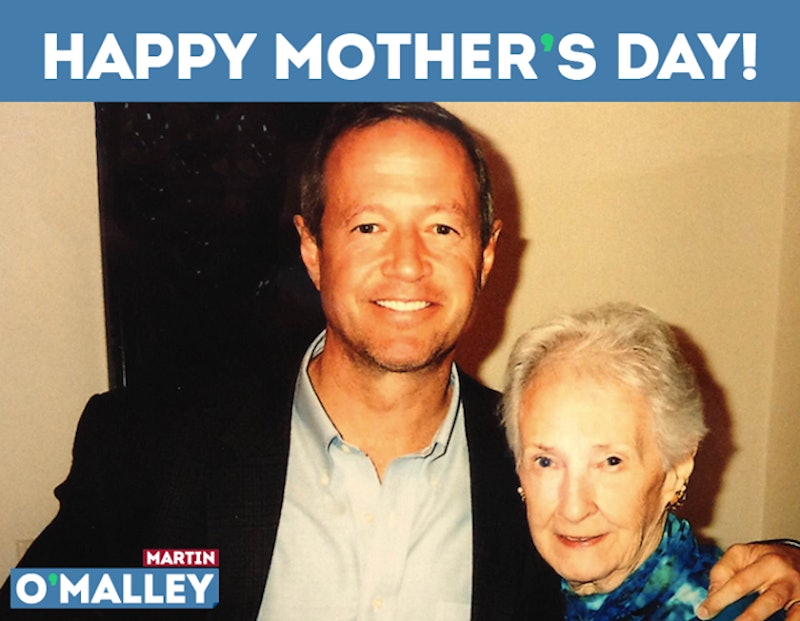 Democratic presidential candidate Martin O'Malley is a really interesting person. He's been mayor of Baltimore, governor of Maryland, he plays guitar in a band, and is also a practicing Catholic. But one of the coolest things about him is his mother. Martin O'Malley's mother Barbara O'Malley is known as Mrs. O on Capitol Hill, and is basically an institution in the place.

Barbara O'Malley, 87, has been working as a receptionist for Senator Barbara Mikulski, a Democrat from Maryland for 27 years. She is also apparently quite the character, and is admired by Mikulski and other senators on the Hill for her love of Spritz cookies and her whip smart sense of humor. In February, Former West Virginia Sen. Jay Rockefeller told The Wall Street Journal that if "she thinks the conversation has gone on too long, she goes, 'Go to your office and do some work.'"

Mrs. O is so popular that O'Malley once said that senators who do not recognize him are well aware of Mrs. O, and will tell him as much. When O'Malley was considering whether or not he would like to have his mother take an active role in the campaign, Sen. Mikulski told O'Malley "hands off," and that snatching his mother from her post as receptionist would be O'Malley and Mikulski's "first big battle." Mrs. O'Malley also told her son, "No way."

Prior to working for Mikulski, Mrs. O stayed at home for several decades to care for her home and six children, according to The Wall Street Journal. Once the youngest of the O'Malley children started high school, her kids encouraged their mother to re-join the work force. Martin O'Malley had previously worked for Mikulski's campaign, and told his mother that Mikulski's office had an opening for a receptionist. Mrs. O was apparently overjoyed at the idea of working for Mikulski. Her response to learning about the receptionist job was, "Yay! A woman senator!"

Mrs. O's political career began in the 1940s when she worked for Harry Truman's 1948 campaign. Her father, Joseph Suelzer, was their county's Democratic chairman in Fort Wayne, Indiana — a family tie that Mrs. O says helped her get the gig with the Truman campaign.

Later, Mrs. O earned her private pilot's license while still a teenager, and even served during World War II in the Civil Air Patrol, according to CBS. In addition to working on Capitol Hill for Mikulski, she volunteers at the National Air and Space Museum. She also likes to bake brownies and various other goodies for the office.

Concerning her current career in the political arena, Mrs. O'Malley told The Wall Street Journal that she has no plans of leaving her job anytime soon.

More like this
Kim Kardashian & Pete Davidson’s Relationship Timeline From Start To Finish
By Jordyn Tilchen and Bustle Editors
Khloé Kardashian Is Reportedly Dating A Private Equity Investor She Met Through Kim
By Jordyn Tilchen
Kendall Jenner & Devin Booker Have Seemingly Reconciled Just Weeks After Split
By Jordyn Tilchen
Are John Legend & Kanye West Still Friends? The Singer’s Latest Update Is Candid
By Brad Witter
Get Even More From Bustle — Sign Up For The Newsletter