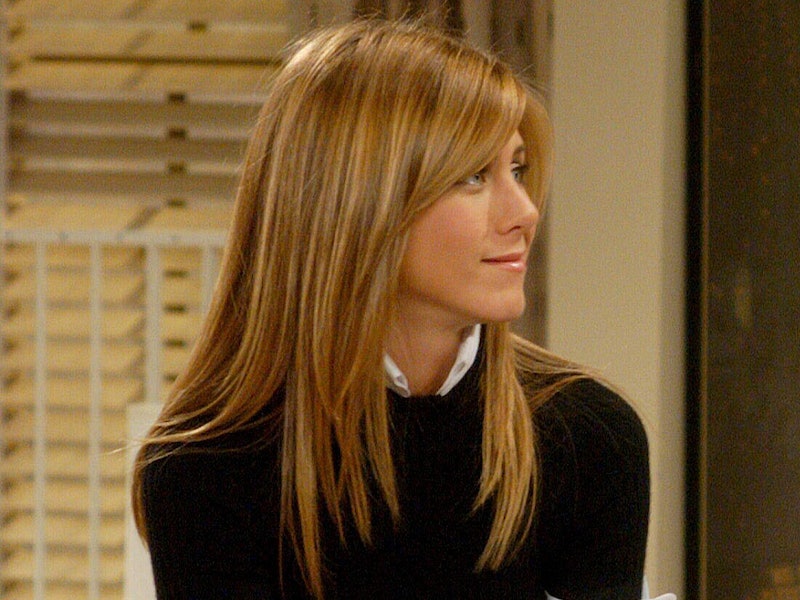 I'm not sure there's any show that I've re-watched quite as many times as Friends. You think that would mean that I know the adventures of Ross, Joey, Monica, Chandler, Phoebe, and Rachel like I know the back of my hand. But a recent eye-opening development has made me — and, hopefully, soon the world — question absolutely everything that I know about the sitcom. Jordan D'Amico at Recently Heard discovered something mind-blowing about Friends — specifically, about heroine Rachel Green. As evidenced by the episode "The One With The Mugging," Jennifer Aniston did not play Rachel in every Friends scene.

Update: We reached out to D'Amico to ask how he found this insane detail. He tells Bustle via email:

I'm overly zealous when it comes to finding continuity errors on TV shows. So much so that it drives my friends and family crazy because I always have to pause and rewind shows just to point them out. It was during a recent binge-watch that I just happened to notice the mistake. What caught my eye was the fact that "Fake Rachel's" shirt was a noticeably different colour. I sort of looked at it for a second on pause and wondered how I'd never noticed it before. The more I thought about it, the more obvious it seemed. I figured that it was something that the Internet and every other obsessive Friends fan like me needed to, or at least might want to, know about.

Earlier: If you have no idea how you never noticed this before, well, I'm right there with you.

It was an ordinary day of marathoning Friends when D'Amico discovered this Earth-shattering fact. D'Amico was watching a scene in which Joey and Rachel are both in Monica's kitchen, as Joey is discussing a big audition he has coming up.

When the camera cuts to an angle on Joey, you can very clearly see someone who is not Aniston (but has equally gorgeous hair) standing next to him in a plaid shirt. D'Amico wrote:

It’s no secret that many TV shows use stand-ins during filming, especially when they need to reshoot a particular part of the scene or when they focus on shooting one actors lines before switching to the other. But, for some reason, seeing this girl, likely a staff or crew member, has shaken me to my very core. What’s real and what isn’t?

Here is the photo of Rachel, right before she is swapped:

And here is the picture of her impostor:

See the left-hand corner? See the person who is decidedly not Rachel? What is this madness?! There must be some explanation for this change-up, and here are seven that I have come up with.

1. Impostor Rachel Is From An Alternate Universe

She just popped in to make sure Joey hasn't broken the spacetime continuum yet, and is unseen by any of the other characters. That's why she was behind Joey.

2. She's Rachel's Twin, Who Got Cut Out Of The Entire Series

There actually were seven friends this whole time, but Rachel's twin got cut out of each and every scene, except for this one.

3. There's A Ghost In Monica's Apartment

One of Rachel's relatives has followed her to New York to warn her about the woes of getting back together with Ross.

4. Rachel Is A Shapeshifter

Is there any proof that Rachel is definitively not a shapeshifter? Riddle me that.

5. The Entire Episode Is Joey's Dream

It would explain the surreal nature of the scene.

6. This Episode Takes Place In An Alternate Reality

One where there is a normal Rachel, and another with a Rachel who was a lumberjack.

This seems pretty unlikely, though.

What else have we missed on Friends? Better rewatch the series another dozen times to find out.