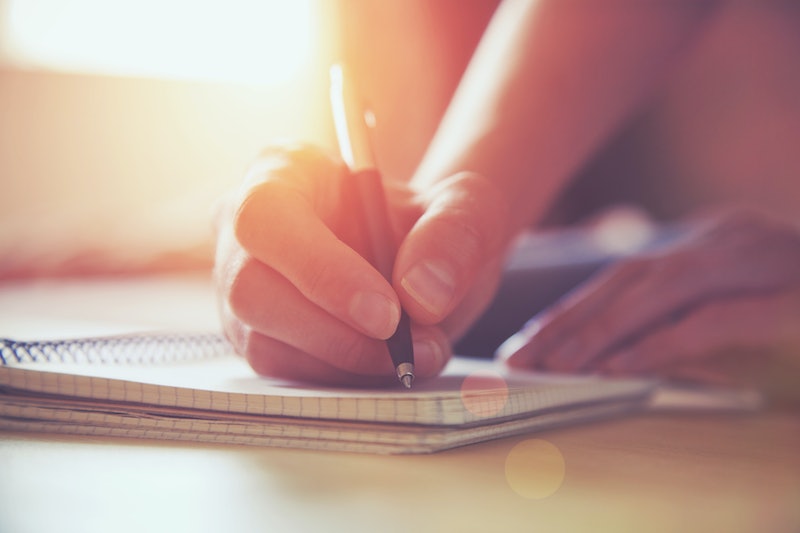 As of last night, I am just over halfway into the second draft of my still-untitled screenplay. I've been working on the script, a dark comedy about a college freshman's return to her hometown over Thanksgiving break, for about three months now. The first draft, a 93-page, incoherent mess of "writing," took a little over a month; I wrote a few pages each night, and by November, I had a full-length, albeit horrible, script in my hands. I began editing a few weeks later, and although it still needs a ton of work before I can call it done, it's edging closer to becoming a final product.

Everyone, from bestselling authors to students in A.P. Lit, knows that writing isn't easy. There's the creativity, and the motivation, and the hours of work, and, perhaps most importantly, actually finding the time to get it done. As someone who's known she's wanted to be a writer since first grade, I've long come to terms with the fact that writing takes work. Still, after so many years of practice, I thought I'd mastered it pretty well. I rarely had trouble putting pen to paper, save for a few essays here or there, and when I did encounter writer's block, it typically lasted a matter of minutes. All in all, I figured I was one of the lucky ones; writing just seemed to come easy to me.

And then I started writing fiction. Writing books and screenplays, I soon discovered, was a lot harder than essays and memoir. It required planning and plotting and structure, all things that I previously dismissed as unnecessary. I found myself floundering, leaving works unfinished and facing days of empty pages. There were writing rules I saw online or in books that I knew some people used to help but I figured they were meant for people who didn't know what they were doing. Not me.

It took me two unfinished scripts, one quarter-done manuscript, and an entire year to realize I was wrong. Those rules that I so casually dismissed as crazy? Turns out they kind of work. Here are the seven tenants of fiction writing that I've (reluctantly) found are worth following:

Yeah, it turns out this one isn't actually ridiculous. When I first began writing fiction, I would start with real enthusiasm, writing five, 10 pages in one day. And then I'd stop, pretending I was taking a break when really, I was leaving the work behind because it was "too hard" or I was "too busy." There's nothing wrong with getting distance from your work (see Rule #6), but when you're writing a first draft, even a few days away from the manuscript is too much. By writing every single day, even if it's just a paragraph scribbled on a note-pad between classes, you're forcing yourself to get the work done.

Disclaimer: I hate outlines. Before I started writing fiction, I'd never used them apart from middle school history classes. I'm not a plotter, I'd say. I'll figure it out as I go along. That may have been fine for 2,000-word non-fiction essays, but for a book? Not so much. 300+ page works about the detailed lives of fictional characters require you to know exactly where you're going. For some people, that means outlining the minute details of each scene, while for others, that simply means jotting down some key information for each page. For me, it's somewhere in the middle; I make sure I know the purpose of each scene so I don't get lost, but I let the details fill in as I go.

With non-fiction, my general attitude towards writer's block is "it'll pass." And normally, it does; within a few minutes, I'm back to writing. Yet with fiction, I've learned that I can't just wait for the block to pass, because if I do, IT WILL NEVER PASS. That year I spent trying and failing to write fiction? Most of it was spent "dealing with writer's block," i.e. not writing a single word. As frustrating as it is, it's necessary to work through the blankness. Write a scene, write a sentence, write something — anything's better than staring at a blank page.

One major reason for that year-long writer's block? I was sitting in the same place, every single day, trying to think of ideas, and getting surprised when nothing was coming. Writing in the same exact environment each day might be helpful to some people, but for me, it was majorly suppressive. The day I decided to change my scenery and write from a café, the ideas started flowing. Now, when I've come to a standstill, I get off my couch and take a walk. Literally the minute I step outside, the writer's block is gone. Of course, that's when I don't have my laptop and am left furiously dictating notes to Siri, but you get the point.

5. Talk About Your Writing to Others

This one's tricky, because it's all too easy to fall into one of two extremes. The first time I started writing a major fiction project, I kept completely silent, refusing to share even the tiniest bit of information about the work. I believed that it was my personal, private project, and even when I found myself dying to get the others' advice on particular scenes and characters, I kept quiet. Of course, all my scenes and characters ended up sucking, and that method failed. So during the next go-around, I decided to share everything about the manuscript I was working on, telling all who asked (and plenty who didn't) the details of the project. Unsurprisingly, this method backfired too; when I lost interest on the project, I had a dozen people asking me what happened. Turns out constantly repeating "um, well, I kind of gave up..." isn't fun. Finally, though, with my latest script, I've found a middle-ground. I keep the details quiet, but when I have questions, I ask — feedback is helpful, and when others know about your work, it motivates you to actually get it done.

6. Distance Yourself From Your Writing

The key application to this rule? AFTER the work done. As we all know, stopping in the middle of a first draft is a terrible idea. Taking a break afterward, though, before beginning revisions, is actually pretty smart. It gives you some much-needed perspective on your writing, and the weeks away (Weeks. Not years.) will make you realize how important the work is to you. If, nearly a month after you last sat down to write, you're still thinking about fixing up those plot points and giving that character a story arc? Then you know it's worth your time.

7. Write What You Know

The simplest and most well-known rule is the one I struggled with the most. With non-fiction, it goes without saying to write what I know, because I'm writing either about my life or the lives of real people. With fiction, I figured that as long as the story interested me, I could write it, but I quickly discovered that's not the case at all. As exciting as I found writing stories about people living in situations and dealing with problems totally different from my own to be, I wasn't very good. In fact, I kind of sucked. It all sounded fake and forced, the type of fiction you cringe at reading. Only when I started creating characters and plotlines that echoed my own life, or at least were based in ideas and emotions that I wholly understood, did my fiction writing begin to sound natural. That story about a girl with five siblings, living in small-town Iowa? Maybe someone will write it, someday, but it certainly won't be this New York-raised only child.