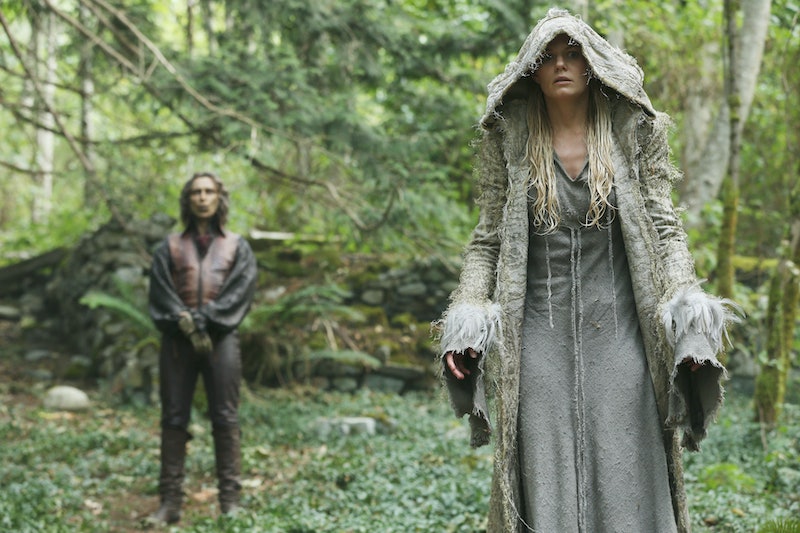 Part of the fun of Once Upon A Time has always been piecing together the history of our favorite fairy tale characters. Remember when the only way to tell when an Enchanted Forest flashback was taking place was by the severity of Regina's lipstick shade? Now, the Season 5 timeline on Once Upon A Time is as twisted as ever. Let's sort through all the new information and piece together a timeline now that Camelot and all of its legendary characters are in the mix.

One of the reasons that this season has been a little bit confusing is because there are scenes in Granny's Diner in both the Camelot past and the Storybrooke present. I love a cheeseburger as much as the next princess, but it makes it a little more difficult to get one's bearings. It also doesn't help that so many characters in this universe have managed to live long lives without aging very much. The strongest through line in Season 5 has been Emma Swann's slow descent into darkness. Before it gets any more complicated, here is a a recap of the Once Upon A Time timeline now that several hundred years have been added on to it.

Before The Dark Curse

Over 1000 years ago, a soldier named Merlin found the Holy Grail, and became an immortal wizard who can see the future. A brief 500 years later, Merlin met a nice girl named Nimue (rhymes with "Him? You? Hey,") whose village had been ransacked by a villain named Vortigan. They fall in love, but behind his back she too drinks from the Grail, in order to avoid an Edward Cullen situation. Why do our immortal boyfriends never want us to be immortal too? Anyway, Nimue uses her newfound power to rip out Vortigan's heart and crush it, becoming the original Dark One in the process. Also at that time, the Holy Grail was forged into Excalibur, and then immediately split to become the Dark One dagger, which Merlin tethers to Nimue in order to control her Dark power. However, that doesn't work, and Nimue uses the dagger and Merlin's tears to turn him into a sad tree.

Even more centuries later, King Arthur met and fell in love with Guinevere when they were children and he dreamt of ruling Camelot with Excalibur. As adults, he finds the sword and pulls it from the stone, but without the dagger, it is incomplete. As the days pass, he became obsessed with completing Excalibur. Guinevere fell in love with Lancelot, making Arthur jealous. He put a spell on his lady to make her forget and banished his one true bro, who used to sit at Siege Perilous, the "right hand man" chair. He uses the same spell on the kingdom that he used on his wife. Camelot is basically mind-controlled and placated.

Presumably, the Dark Curse hit and they were all frozen for twenty-eight years. Life went back to normal for approximately five seasons.

During The Dark Curse

Merlin took a job at a movie theater, busted young Emma for trying to steal candy, and warned her not to take Excalibur. Young Emma was like, "stranger danger, please go away."

The Gang Arrives In Camelot

After the events of the Season 4 finale, Dark One Emma goes to the Enchanted Forest first, and discovers that Rumplestiltskin is now a misguiding voice in her head. (Gold does not come with them, he is in a coma). She runs into Merida, who is trying to save her kingdom and her brothers from turmoil. Emma really, really wants to rip Merida's heart out, but the group shows up, stops her and they all arrive in Camelot.

Henry meets a girl named Violet at the welcoming ball. They start "courting," but Dark Emma ruins her son's chances at puppy love by taking Violet's heart and using it to break his, so that she could use Henry's tears in a spell to break Merlin out of the tree. Not cool.

Lancelot returns to warn everyone about Arthur. Surprise! Cora didn't kill him after all. He gets locked up, and discovers Merida in the dungeons. She stole one of Arthur's boats to get to DunBroch and got caught. The Scottish princess and Belle go off on a side-quest to free her brothers and regain control of the kingdom. Meanwhile, Arthur realized that the Storybrooke gang are not exactly on his side, and they are at war.

Also, Zelena figured out how to use the hilt of Excalibur control Merlin, like the dagger controls the Dark One. That's awesome.

The Gang Returns To Storybrooke

Six weeks after they left, and with no memory of what happened in Camelot, of course. I'm willing to bet that Zelena gave Emma the suggestion or cast the curse herself, because otherwise it's a little annoying that they used the same trick twice. Merlin is missing, Emma has gone full Dark One, and she brought Merida with her to use as a pawn. Excalibur is whole, but stuck in stone again. She needs a hero to extract it, and decides to have Merida turn the newly awakened Mr. Gold into one.

Henry meets Violet again, this time in Granny's Diner. This time Emma helped push their relationship in the romantic direction. However, Henry saw in a dreamcatcher (which is being used on OUAT as a magical Vine) that Emma betrayed him in Camelot, and he is mad about it. Meanwhile, King Arthur is pissed that Excalibur is missing again, and starts a secret quest to turn Storybrooke into the new Camelot (remember the mind control), and everyone is on to his tricks.

The Camelot flashbacks are drawing to a close (it was only six weeks after all), so the timeline should be completing itself soon. Hopefully, we'll get some answers on Once Upon A Time about how Emma finally went dark — but it's sure to raise just as many questions and problems for the remainder of Season 5 when it happens.