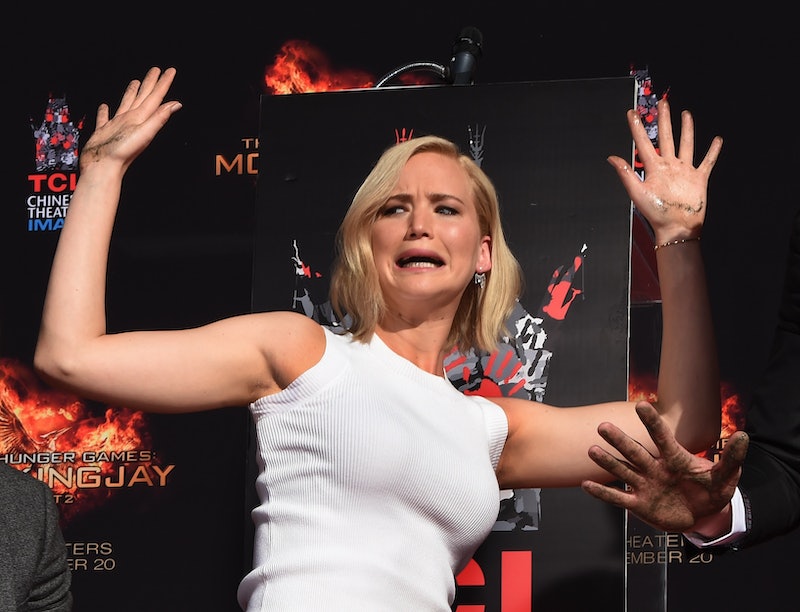 Jennifer Lawrence is one of the most relatable actresses in Hollywood due to her wit, sense of humor, and humility. Sure, she's one of the highest paid actors in the business right now, but she continues to prove to us all that she is still just a girl from Kentucky, who is extremely grateful for her success. And Jennifer Lawrence's December Vogue cover has given an even more in-depth look into her personality, and I love her even more now. Accompanying her cover story is a short film titled "Jennifer Lawrence Nails The Awkward Interview," in which she does just that.

The film is shot by photographer Cass Bird and features the 25-year-old doing a parody of photo shoot b-rolls, essentially making fun of herself and her fellow actresses. Naturally, Lawrence makes it look charming and easy, and I wouldn't expect any less from her, since she definitely hasn't been afraid to poke a little fun at herself throughout her career.

At one point, in the video she lays across a motel bed (which she imagines is like "Quentin Tarantino's house") and asks the camera, "What kind of hard-hitting, journalistic questions were you gonna ask me?" while flipping her hair.

My personal favorite moment comes when she feeds a horse some apples and giggles and says, "This is probably what it's like to be on a date with me." Oh, Jennifer, ever so self-effacing. To be honest, I kind of feel the same way about my date manners considering it's been so long since I've been on one... whoops.

Actually, her entire interaction with the horse is hilarious (just check out her horse shaking face!). In the print interview she also poked fun at her single hood while showing the writer her room and saying, “This is where the maaagic haaaappens... Literally zero magic has happened in here... Cheers to my hymen growing back!”

This is where Lawrence truly shines: just being herself. She is naturally funny and isn't afraid of not seeming like the stereotypical Hollywood actress. She falls on red carpets, confesses her love for pizza, and responds to rumors about her hygiene with tongue-in-cheek videos on Facebook:

Ugh, Jen, will you be my best friend already?