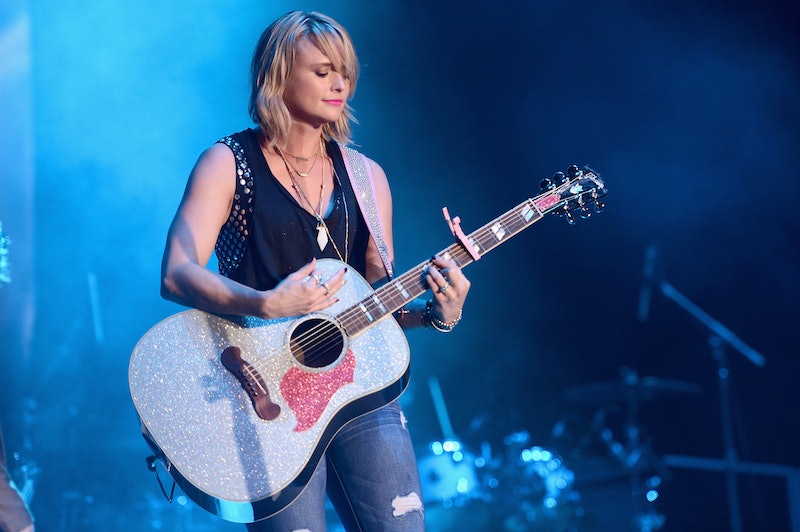 Taking a leaf out of the Taylor Swift tour playbook (not that Swift is the first to bring friends on stage and perform their songs, but she's done it a lot), Miranda Lambert has filled the recent legs of her "Roadside Bars and Pink Guitars" tour with covers and surprise appearances from collaborators. Last month, she closed the tour with a Miranda Lambert take on Foy Vance's "Shed A Little Light." Peers like Ashley Monroe, Patty Loveless, and Gwen Sebastian, as well as other members of Lambert's band, each take a turn leading the song. It's an overwhelmingly female-fronted take on Vance's soaring melody, which makes it even more awesome.

But Lambert and her crew have also performed a bunch of other covers. Many of them have been originally female-penned and-performed songs (from the likes of such country forebears as the Dixie Chicks and Loretta Lynn, for example). Then there are some of the more biting choices — after her split from Blake Shelton, she covered Lynn's breakup tune "Rated X." Even before her divorce was made public, she covered No Doubt's "Spiderwebs" (as many were quick to point out, an uncomfortable twist given that Shelton subsequently began dating Gwen Stefani). Lambert has an eye and an ear for a great tune, and here are some of her greatest hits of other people's hits.

Just prior to the ACM awards (where she also covered Loretta Lynn), Lambert posted a video to Instagram excerpting a spontaneous karaoke performance of Taylor Swift's "Bad Blood."

Lambert covered one of her self-professed "favorite songs," the Merle Haggard tune "The Way I Am." The fan-filmed video is a little chaotic, but Lambert's voice pierces through the background noise and eventually silences the conversation.

The Dixie Chicks are probably one of the greatest all-female country groups of pretty much ever. They went pretty silent after the notorious show where lead singer Natalie Maines denounced George W. Bush's actions as president, releasing steadily less music with each passing year. But Lambert revived the band, channeling them in her own trio with RaeLynn and Gwen Sebastian.

Lambert must feel quite musically indebted to Loretta Lynn, given the number of Lynn's covers she's performed in recent years. She also covered "Rated X" and "Coal Miner's Daughter" at separate performances.

Over the summer, before her divorce from Blake Shelton was made public and her now-ex went on to date Gwen Stefani, Lambert covered one of No Doubt's songs.

Following her split from Shelton, Lambert returned to her forte — covering Loretta Lynn. This time, she took on the famed breakup track "Rated X." Choice lyrics include "Divorce is the key to bein' loose and free" and "If you go too far you're gonna wear the scar of a woman rated X."

Though the tour might be over, Lambert has been performing covers since long before her most recent travels and performances, and will likely continue to do so. One can only hope more Dixie Chicks covers are next on the slate.