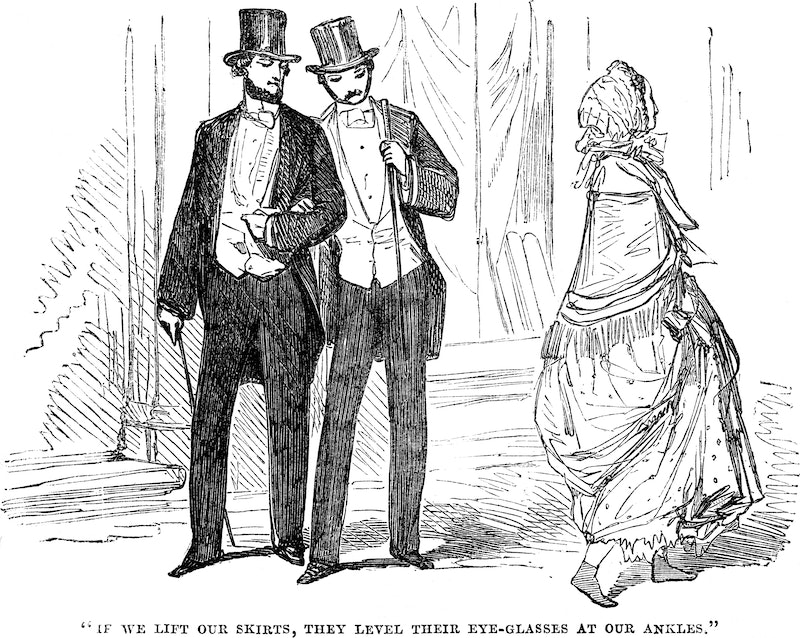 When it comes to following proper etiquette rules, I'll admit that I'm a fan of a few rules that seem a bit outdated. I'm annoyingly punctual, I love sending and receiving thank you notes, and it really grinds my gears when someone has a long, loud phone conversation while on public transportation. (Seriously — some of us are trying to read. Text messaging exists for a reason!) But after doing a little research about the history of etiquette, it didn't take too long for me to realize that a hundred years ago, I would have a) been considered completely uncivilized and b) become so fed up by that era's rules and standards of etiquette that I would have just given up on socializing altogether.

It isn't especially surprising to hear that, in the past, most etiquette rules were generally super sexist. It also probably won't shock you to hear that the etiquette rules relating to dating (uh, I mean "courtship") were downright ridiculous. But honestly, adhering to etiquette rules in the past doesn't sound like it was a picnic for anyone, no matter their gender. For example, in the 1890s, an individual could be dismissed as a hypocrite based solely on the type of umbrella he or she carried. And in the same era, not only were the topics of politics and religion off limits at parties — one was also expected to tread carefully when discussing music and art (so you can just forget about a lively debate about whether or not T. Swift and her squad are overrated).

Here are seven bizarre etiquette rules that we're lucky are no longer used:

1. Victorian Women Couldn't Give A Man A Store-Bought Gift

In Victorian society, courting couples had to adhere to strict etiquette rules about exchanging gifts with one another. A woman couldn't give a man a gift unless he had given one to her first. Men had fairly limited options when selecting a present — flowers, books, and candy were considered acceptable. Once they'd received a gift, a woman could give one in return — but it had to be inexpensive and typically handmade. So, those of us who find that our Pinterest projects never come out quite like they're supposed to would have been out of luck.

2. A Woman's Walk Conveyed Her Character In The 19th Century

In the 19th century, Emily Thornwell was considered a prestigious social advisor for young women. And she had some pretty strict criteria for the appropriate way to walk in public: "A lady ought to adopt a modest and measured gait; too great hurry injures the grace which ought to characterize her." If walking fast is wrong, I don't want to be right — and I feel like Thornwell would have considered me seriously uncivilized. (But that's OK — I have places to be.)

Robert Louis Stevenson felt so strongly about proper umbrella etiquette that in 1894, he penned an entire essay about it called "The Philosophy of Umbrellas". He kicked it off by noting that umbrellas had become an indicator of one's social position, and stated that silk umbrellas were for hypocrites, while gingham ones were for the "decent and reputable." So, that's something to think about next time you get caught in a downpour and need to run into the closest store to grab an umbrella.

Vogue's 1948 Book of Etiquette confirms my suspicions that I wouldn't have been a happy camper in the first half of the twentieth century. The book made it clear that ladylike women decidedly should not be lauded for their ability to hold alcohol: “‘She can certainly hold her liquor’ is not a compliment.” So it was considered ladylike to be hammered after one martini? I'm confused on many levels here.

5. Single Women In the '50s Were Told To "Avoid The Appearance Of Evil"

After checking out the above headline, you're probably wondering what type of dating behavior could be considered "evil." Don't worry — The Amy Vanderbilt Complete Book of Etiquette, which was published in 1952, existed solely to explain these kinds of things to us ladies. Here are its ground rules for successful dating: "A girl not out of her teens would do better to avoid [dinner at a bachelor's] unless others, considerably more mature than she, are present. A career girl, from her twenties onward, can accept such an invitation but should not stay beyond ten or ten-thirty." So having dinner at a guy's house = evil? Got it. Glad we had this talk!

6. Many Topics Were Off Limits At Dinner Parties In The 1890s

In 1895, Lady Constance Howard penned "Etiquette of Dinners" for Home Chat. And let me tell you — following these rules would lead to some seriously boring dinner party conversations. According to Howard, not only should the subjects of politics and religion be avoided at all costs during conversation, but "the hostess who possesses tact will not discuss music or painting with persons who have no taste for either." Seriously? If I can't openly quote my favorite ridiculous lines from the latest presidential debate, then what's the point of even going to a social gathering? Thanks for the advice, Lady Constance, but I would have opted to stay home and watch Netflix. (You know, if Netflix had existed in 1895.)

7. There Were Restrictions On Laughing & Smiling In The Late 1800s

In the late 1800s, well-mannered people were taught to keep their laughter to a minimum, and smiling for too long was frowned upon. (Pun intended — sorry, I had to.) How harsh! Poor Buddy the Elf would have been shunned from society within seconds.

And the worst part is, you would have had to keep your laughter to yourself when you started giggling about all those ridiculous rules about umbrellas, courting, and the polite way to walk.

More like this
On TikTok, #SeñoraEra Shows Latinx Users Becoming Their Mothers
By Natalia Perez-Gonzalez
The 4 Most Forgiving Zodiac Signs
By Kristine Fellizar
How This Founder Turned Her Antidote To Doomscrolling Into A Business
By Anna Scott
4 Zodiac Signs Most Affected By The August 2022 New Moon
By Brittany Beringer
Get Even More From Bustle — Sign Up For The Newsletter