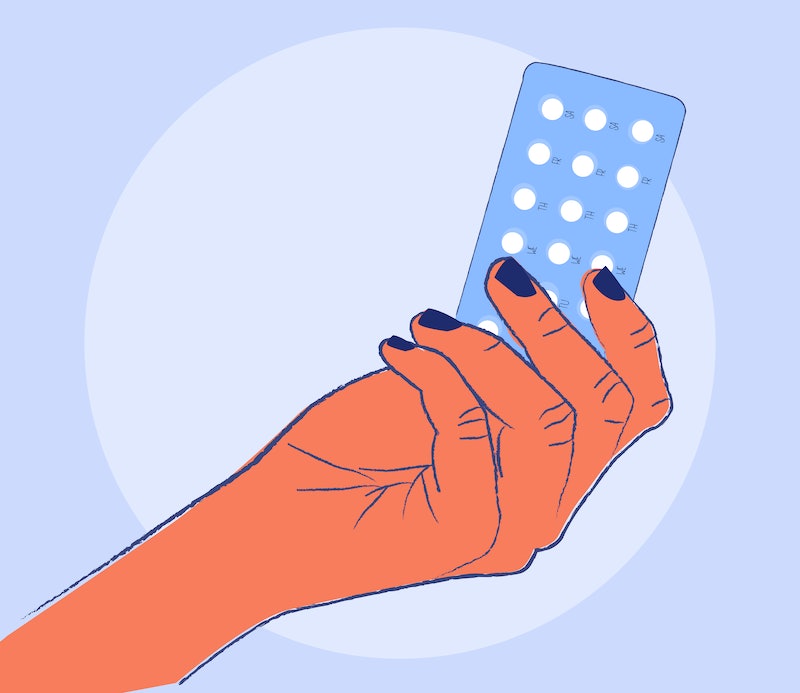 Over 100 women from 28 states are suing Qualitest Pharmaceuticals after claiming that they became pregnant while on the Pill, reports ABC News. I know, how does that happen?! Well, according to the court documents, the women are saying their pills were allegedly in the wrong order. As you may know, it is important to take it every day at the same time. A usual pack contains 28 days’ worth of pills, 21 with hormones and seven that are placebos. However, in this case, their packages were allegedly rotated 180 degrees, so placebo pills had been taken when active pills should have been taken. The women filed the case in Philadelphia and are suing for millions in damages, including for lost income and medical fees, and some are seeking the cost of raising the child through adulthood and college.

But, don't panic: They were recalled in September of 2011 by Qualitest (a subsidiary of Endo Pharmaceuticals) for these birth control brands: Cyclafem, Emoquette, Gildess, Orsythia, Previfem, and Tri-Previfem. According to court documents, 3.2 million packs of pills had been recalled.

Our commitment is to patient safety and we take product quality very seriously. ... There is no new or recent product recall. The recall that forms the basis of this suit was entirely voluntary and occurred more than four years ago in September 2011. The voluntary recall occurred based on an extremely small number of pill packs that were manufactured by an external contract manufacturer. Endo has been able to confirm only one blister pack that manifested a defect and was sold to a patient. Additionally, courts have dismissed cases arising out of the recall because the plaintiff could not establish that she purchased a defective package.

While the lawsuit was filed in Philadelphia, it's a bit complicated, as many factors are involved in determining each women's case. Recently, a similar suit was filed in Georgia and a federal judge did not grant class-action certification. In his ruling, U.S. District Judge Steve C. Jones said just 53 of the half-million blister packs that were recalled had the pills in the wrong order. In addition, laws vary state-to-state and person-to-person.

A recall like this is not common, but it's still a scary thought. It's also a reminder how important the correct use of birth control pills really is. I spoke to Dr. Lauren F. Streicher, MD, Clinical Associate Professor of Obstetrics and Gynecology, Feinberg School of Medicine, Northwestern Memorial Hospital, for some tips on how birth control pills are the most effective. She is also the author of Sex Rx-Hormones, Health, and Your Best Sex Ever and The Essential Guide to Hysterectomy .

“There is a failure rate with birth control pills,” Dr. Streicher tells Bustle. “It’s 0.1 percent if perfect, but the typical failure rate is 7-8 percent. User-dependent methods [like the Pill] are most likely to have failure rates.”

However, that does not have to be the case. Here are Dr. Streicher’s tips on how to make sure your birth control pills will be as effective as possible:

1. Start The Pill Pack On The Correct Day

“The most important thing about hormonal contraception is that you have to be good about taking it,” says Dr. Streicher. “The pill that is most important to not miss is the first pill of the pack.”

2. Set An Alarm To Take Them At The Same Time Every Day

“What I tell people is to set your phone for a reminder time that you will be awake every day of the week, like noon, a time you know you are consistently going to be around,” Dr. Streicher says. She adds that this is key since we may wake up at 6 a.m. Monday-Friday, but not until noon on the weekend.

3. Don’t Take Any Days Off (From Placebos, Too)

To be most effective, don’t skip a day. If you take the pill at the exact same time every day, this shouldn’t happen.

4. Buy Pill Packs In Bulk And Plan In Advance

Dr. Streicher realizes some insurance companies only allow you to get one pack of pills at a time, but if you can get more, do so. “Buy a year’s supply so you are never without them,” she says. “With 12 packs at a time, there’s a lot less of a chance you are going to mess up.” Plus, she mentioned, if you have a new pack waiting, you won’t find yourself pill-less on a Sunday when your doctor or pharmacist is not around to provide you with another pack.

5. Carry The Pills In Your Wallet

“Get rid of that big bulky pack and put the pill pack in your wallet — always have it with you,” Dr. Streicher says.

All in all, when in doubt about birth control, no matter which method(s) you use, talk to your OB/GYN. And your partner, of course (but that goes without saying).