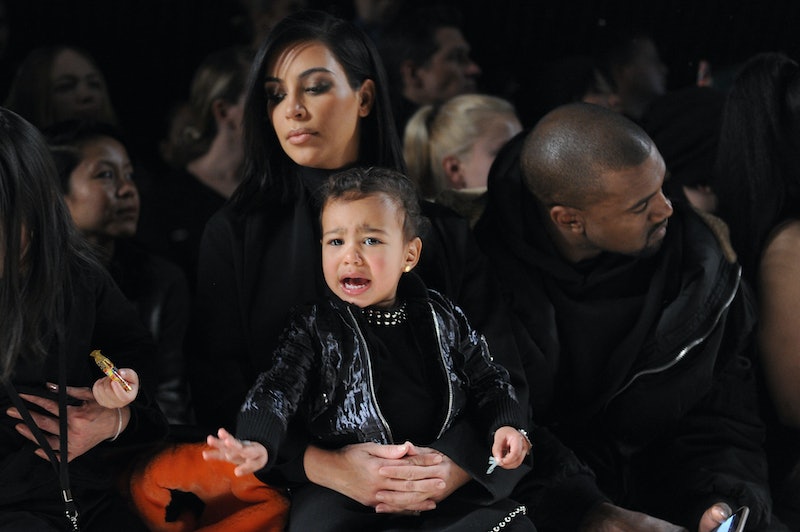 When Kim Kardashian put up an adorable photo on Thursday night of North West and Penelope Disick sharing a moment before bed, the first thing I thought was: What are those cousins gossiping about? I know they're just wee babes, so the assumption might be that they're just babbling at each other, but I know better. These lil nuggets grew up in the spotlight, with every possible need met, so don't assume this is just idle diaper chatter; there's a lot more going on under the surface than meets the eye. They could really be talking about anything, from entertainment news to pop culture to family secrets — the possibilities are endless.

What we do know is that even though Penelope, 3, has a full year on North, 2, North seems to be leading the conversation, reaching out tenderly to her patiently waiting cousin as though to impart some great piece of knowledge that could only be delivered between bath time and bed time. But what could it be? That, my friends, is the question I intend to answer here and now. I've come up with eight possible options, and I'm absolutely sure that one of them is correct.

Here are eight things North could be telling her cousin Penelope in this adorable Instagram. JUST LOOK AT IT.

1. "Did you know my Dad's running for president?"

"Having one cardinal direction in the family is more than enough."

3. "Why wasn't Beyoncé at my parents' wedding?"

"I've heard a lot of excuses, but none that satisfy me."

"I've heard a lot of excuses, but none that satisfy me."

5. "If the Internet is broken, how come people can still use it?"

"Maybe it's something to do with the wi-fi password?"

6. "Do we have to pretend to like Rob's socks since he's family?"

"Real talk though, those aren't going anywhere near my feet."

8. "Why won't Prince George friend me back on Snapchat?"

"Does he think he's better than me just because he's royalty?"

And that's all, folks! That's every possible thing North could have been imparting to Penelope. Tune back in next week for another exciting episode of Babies Talking To Each Other.