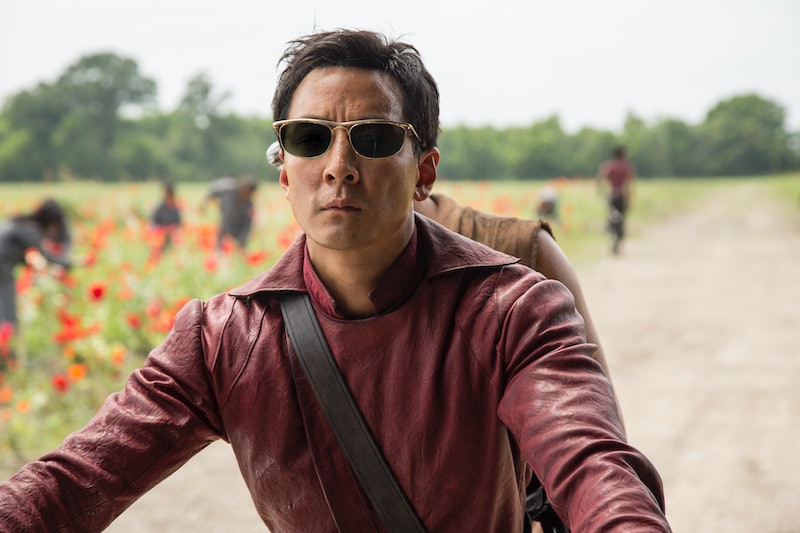 What would an action story be if it didn't have a quiet and stern protagonist? Leading the story of AMC's new martial arts series Into The Badlands is Sunny, whose first scene involves him riding a motorcycle, wearing sunglasses, and killing a bunch of bad guys with katanas, in case you didn't think he was a super cool hero. However, someone doesn't just become a katana-wielding future sheriff in the Badlands of post-apocalyptic America overnight. So who is Sunny, and how did he get to where he is?

Played by Daniel Wu, Sunny is the highest ranking "Clipper," a word that here means a member of the royal army of the territory, in his fleet. He serves a "Baron" named Quinn and has a back covered in tattoos — 404 marks representing every person he has killed to "protect [The Baron's] interests." The Baron, in a pep talk to newly recruited Clippers, tells them the story of Sunny, who was found "naked and shivering down by the rapid river. No parents, no past, no name," and was forged by Quinn into a killing machine.

When he's not clipping, Sunny also serves as Regent, which according to monarchial structure is someone who is appointed to lead in place of a King should they be unable to serve for whatever reason. This doesn't come into play much, but it does command a great deal of respect from other Clippers. He also takes time out of his busy schedule to find alone time with Veil (Madeliene Mantock), even though it appears to be against Clipper code to have a romantic relationship.

Sunny also likes spending time staring out into the great expanse of the badlands and thinking about the possibility that there is a land called "Ezra" that is better than his current home, the same place the mysterious and powerful boy he found in a box claims to be from. However, this mysterious power brings with it new enemies — in the pilot episode's biggest setpiece, Sunny must take down a flurry of warriors who seek to literally cut him down. Sunny manages to fend out the many attackers on his lonesome, who were sent to locate the mysterious box boy M.K. (Aramis Knight) on behalf of rival Baron "The Widow."

Despite being considered extremely loyal by Quinn, Sunny's true allegiances seem to lie in self-interest as he releases M.K. into the wild with the hopes that he will find Ezra, giving M.K. the choice to leave because he "never had one." It looks like Sunny isn't interested in being a servant to a master any longer, and will be serving himself on Into The Badlands.