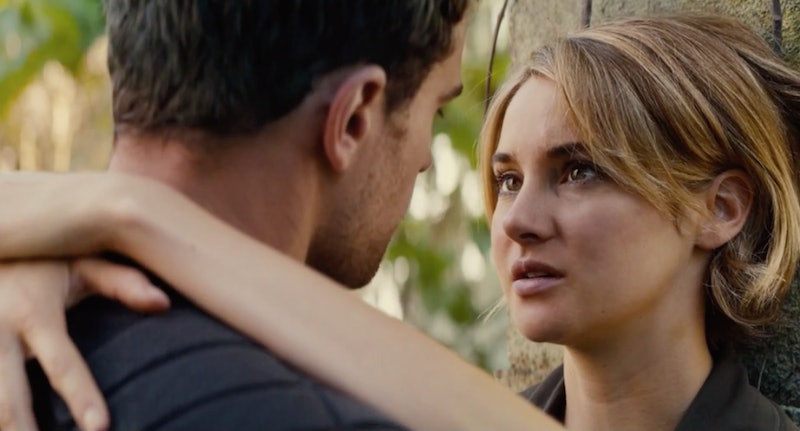 On Friday, the pop culture world had so many wonderful things happening. There's plenty of great new jams to listen to, with Justin Bieber, Hailee Steinfeld and One Direction dropping new albums. As if all of that wasn't enough to obsess over, Lionsgate and Summit Entertainment have released the first Allegiant trailer, and, boy, does it look awesome. The film will be the third installment of the Shailene Woodley-helmed franchise. In case you need a quick refresher, the last movie, Insurgent, ended shortly after our heroine, Tris, found out that she was part of an experiment to heal the human race in the aftermath of the apocalypse.

Based on the books by Veronica Roth, Allegiant follows Tris, Four and the gang as they escape from their civil war torn home in post-apocalyptic Chicago. The trailer, which features Tris rocking a cool new hair style and a killer white dress that I would personally like to borrow, shows that life outside the factions might not be all that Tris and Four hoped for. It also introduces a major new character played by Jeff Daniels. Back for the third go-around are Octavia Spencer, Naomi Watts, Zoe Kravitz, Ansel Elgort and Miles Teller.

The sci-fi thriller looks like it will be the most action-packed of the series so far. It's got Tris and Four propelling down the side of a cliff, shooting futuristic weapons and flying crazy looking hovercrafts. Take a peek.

So, yeah, there's a lot going on. Judging from the trailer, it looks like audiences can expect even more action, intrigue and plot twists than there were in the two previous films.

The best part is that, even after Allegiant hits theaters on March 10, there's still a whole other movie to look forward to. The recently renamed final film, The Divergent Series: Ascendant, will premiere in 2017. Although the book series was a only a trilogy, the film adaptation will span four movies. But, hey, the more there is to see of Theo James and Ansel Elgort the better, am I right?