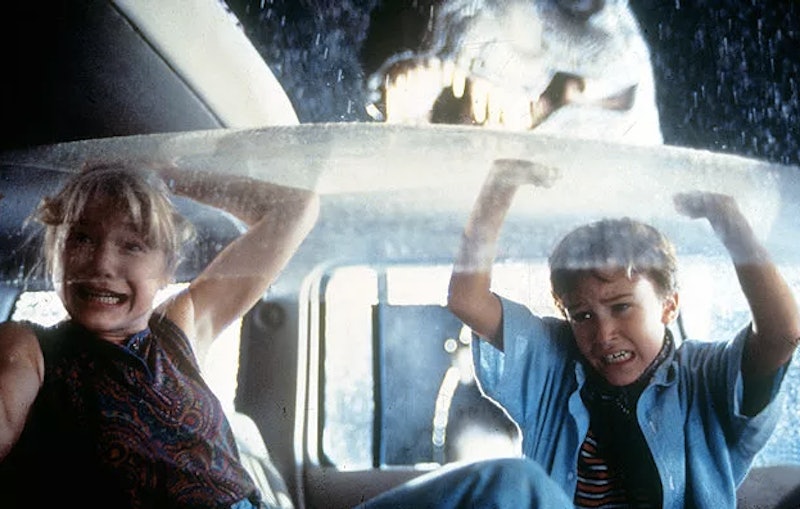 When my dad took my brother and I to watch Jurassic Park way back in 1993, I remember being totally jealous of the kids who were acting in the movie. First off, I definitely thought that the dinosaurs were real and that the kids were so lucky to have acted with them — well, until that terrifying scene while they're being hunted by raptors. After the film, I had my brief moment of wanting to be an actress. I also remember having a wrinkled up teen magazine which featured the actors, Ariana Richards and Joseph Mazzello, who played Lex and Tim Murphy. Now, 22 years later, I wonder what happened to the kids from the original Jurassic Park movie?

After Jurassic World came out earlier this year, my Jurassic Park nostalgia kicked into full force. I was happy to see Chris Pratt take on a new role, but was a little disappointed that we didn't get many cameos from any of the original cast. I was hoping to see if Lex and Tim would somehow have been persuaded to step foot near a dinosaur ever again. Also, where was Doctor Malcolm!?

After some research, it seems like Jurassic Park ended up being Richards' and Mazzello's biggest acting roles. They each decided to go on different creative journeys after they starred in the film as children.

Richards, who played Lex as a 13-year-old, has mostly stepped away from acting and ended up following her true passion: painting. After Jurassic Park, she had a few small roles in the '90s, including a cameo in The Lost World in 1997 and some television movie roles. She eventually went on to get a bachelor degree in fine arts and drama from Skidmore College in New York, and wasn't seen acting on screen again until 2013, in a television movie called Battledogs.

A news station in Portland caught up with Richards in 2013 to celebrate the 20th anniversary of the film, where she has made a name for herself as a portrait artist. Steven Spielberg even has a portrait she painted hanging in one of his offices. Earlier this year, People caught up with Richards where she confessed that she is open to acting again, saying, "If some great role or project finds me, absolutely that could be a nice thing to do, for sure." I really hope she does, because those screams were seriously believable.

Mazzello, who played Tim, stayed involved in the film world, both on and behind the screens. In 2013, he shared with People that his experience filming Jurassic Park impacted the course of his future. He explained, "My time with Steven on Jurassic Park affected where I wanted to go to school and what I wanted to do with my life." After acting in a few smaller films throughout the '90s, Mazzello enrolled at the University of Southern California to get a degree in cinema and television, and Spielberg helped him out a bit. Mazzello said,

Steven wrote me a recommendation for USC to go to film school. Believe it or not, I got in... He's been there for me throughout my life whenever I really needed him.

I mean, if THE Steven Spielberg has your back, I would hope he got in. Mazzello joined Spielberg's HBO miniseries The Pacific in 2010, and had a role in The Social Network, as Facebook co-founder, Dustin Moskovitz. He is currently in post-production for his first feature film, which he wrote and directed, Undrafted. This comes a few years after he released an original short, Matters of Life and Death , through his production company, JJM Productions, in 2007.

Regardless of where they ended up, both Mazzello and Richards agree that being a part of Jurassic Park was a defining moment in their life that continues to shape them, even more than 20 years later.