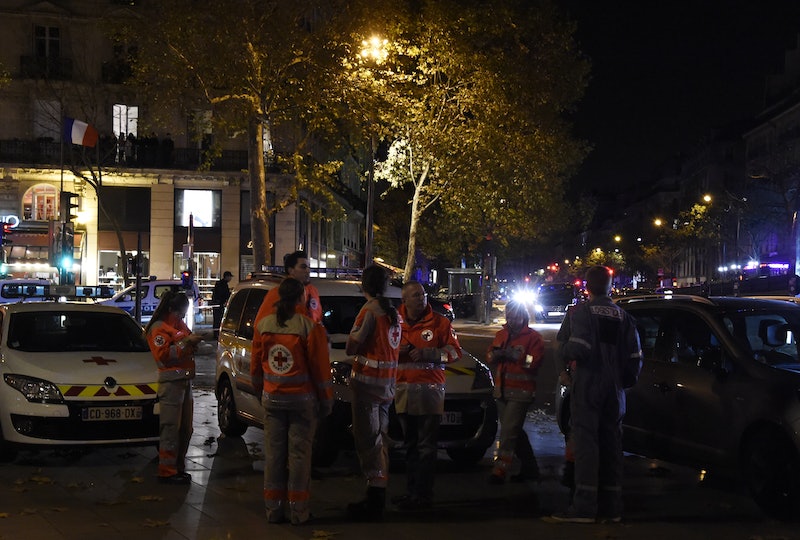 Gunmen opened fire during a string of deadly shootings in the area surrounding Paris' Petit Cambodge restaurant on Friday, killing at least 40. According to local news outlets, several explosions were also reported at a bar close to Stade de France, where France was hosting Germany in a friendly match. Witnesses said they heard the bombings over the roar of the crowd inside the stadium. It was not immediately clear whether the events were connected. Update: French police confirmed a total of six attacks in Paris, including two suicide attacks and one bombing near the Stade de France, as well as attacks at the Bataclan concert hall and a restaurant. French news outlets reported that police launched an assault on the Bataclan concert hall, where gunmen were holding 100 hostages. According to The Guardian, eight attackers are dead, several of whom died after detonating suicide belts. Authorities have reported that the number of fatalities has reached at least 120. ISIS has claimed responsibility for the attacks, and French president Hollande agrees. A motive has yet to be determined.

French President Francois Hollande was in attendance at the football match, but was evacuated immediately according to the BBC. Within minutes of the news, officials on the scene reported another shooting by several gunmen at the Bataclan arts center, not far from the Cambodge incident. According to a BBC journalist watching the events at Petit Cambodge unfold, at least 10 people were lying dead on the road outside the restaurant. Inside the Carillon bar, which is situated across the street from the restaurant, witnesses claimed they were being asked to remain situated on the ground as well.

"It sounded like fireworks," Emilioi Macchio, from Ravenna, Italy, told the AP in a statement on Friday. He said that he had been having a drink at a nearby bar when the shooting started and hid behind a corner for protection.

Several French news outlets reported that some 100 hostages had been taken at the Bataclan concert hall in the city's 11th district, where audience members had been attending a metal show for the rock group Eagles of Death. French newspaper Le Figaro reported that the rue de la Fontaine au Roi had been completely sealed off and that police and fire trucks had the area surrounded; 15 Red Cross trucks had also arrived a little after midnight.

"They are still in the [wind]," one French policeman told Figaro reporters of the assailants. Officers indicated that the men were armed with kalashnikovs and grenades, according to a reporter with The Telegraph.

At the Bataclan concert hall, reports of suicide attacks also began making the rounds. One witness reported hearing the gunmen shouting, "Allahu Akbar" ("God is great") as they opened fire. In an comment to The Telegraph, he recounted:

The men came in and started shooting. Everyone fell to the ground. It was hell. I took my mum, and we hid. Someone near us said they have gone, so we ran out. I was only thinking of escaping. We're out now. I think people are still inside. It's a nightmare - a nightmare.

Paris' deputy mayor told reporters that while it was too early to definitively say whether the attacks had been coordinated, but that it seemed to be the most likely case.

Around 11:24 p.m. local time, French police could be seen surrounding the Bataclan concert hall, where one French reporter had claimed to have heard gunshots for nearly 10 minutes. Others said that the military had been deployed in the streets and Telegraph correspondent Rory Mulholland reported that "nervous police officers in flak jackets and brandishing assault rifles" could be seen blocking the nearby Place de la Republique.

Police told reporters that they feared many of the hostages had been taken to several varied locations. They stated at least 30 had been set free, although it was not clear why.

In an official statement late Friday night, French President Hollande stated that he would be temporarily closing the country's borders and declaring a state of emergency. "France must be strong in the face of terrorism," he told reporters. He then added, "It's a horror."

In the aftermath of the deadly incidents, Islamic State sympathizers began tweeting their support for the attacks under the hashtag #باريس_تشتعل, which roughly translated means, "Paris burns."