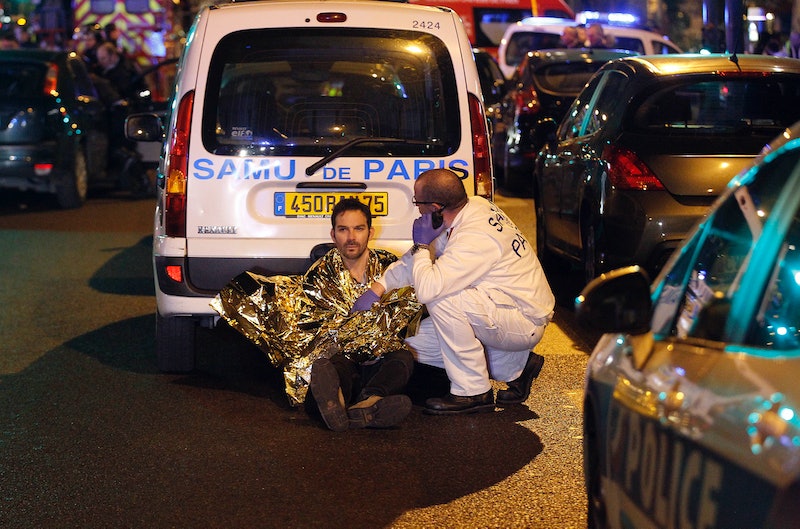 Update: French police confirmed a total of six attacks in Paris, including two suicide attacks and one bombing near the Stade de France, as well as attacks at the Bataclan concert hall and a restaurant. French news outlets reported that police launched an assault on the Bataclan concert hall, where gunmen were holding 100 hostages. According to The Guardian, eight attackers are dead, several of whom died after detonating suicide belts. Authorities have reported that the number of fatalities has reached at least 120. ISIS has claimed responsibility for the attacks; President Hollande agrees it was the terror group. A motive has yet to be determined.

Earlier: Devastating news out of France's capital began early Friday evening, when reports of numerous attacks in Paris began surfacing. The first, a shooting at a Paris restaurant, was harrowing all on its own. Minutes later, reports of three explosions at Paris' Stade de France began to surface. From there, new Paris attacks updates came quickly, and continued to paint an increasingly devastating image. By approximately 5 p.m. ET, the Associated Press reported that 26 people had died in the Paris attacks and that a hostage situation had developed as well at Paris' Bataclan Theatre.

The first of the reported attacks took place at Paris eatery Le Petit Cambodge in the 11th district. The BBC reported that at least 18 people had died in the shooting at this particular scene and that the shooters, who were said to have used Kalashnikov rifles and grenades, are still at large. According to a BBC reporter on the scene, at least 10 bodies could be seen near the restaurant:

The AP also reported that at least 15 people were killed at Paris' Bataclan Arts Center, not far from the site of the January Charlie Hebdo attacks. Attendance numbers at Friday's Eagles of Death Metal concert at the Bataclan could not be confirmed, but the AP reports that there could be as many as 100 hostages in the theater. A reporter from Le Figaro in Paris claimed that the shooting went on for 10 minutes.

Update: Many media outlets are reporting that there are six to eight hostage takers at the theater.

Update 2: Photos depict chaos at the scenes of the shootings.

Update 3: Paris Mayor Anne Hidalgo arrived outside the Bataclan and reports are claiming that 30 hostages have been freed.

Update 4: A fourth shooting was reported at Les Halles shopping mall in the heart of Paris.

Update 5: The AFP and several other outlets reported that police stormed the Bataclan Theatre, where the hostages were being held.

As of 7 p.m. ET, the AP reported that the hostage situation was over and that the two attackers had been killed. A police official told The Telegraph: "The operation is over but it's very messy in there. It's a scene of horror."

Update 6: At approximately 9:31 p.m. ET, The Guardian reported that Paris police prefect Michel Cadot said that the police believe all of the attackers are dead. The report also states that police are still searching for possible accomplices.

Three explosions reportedly shook the stadium, where French President Francois Hollande and 80,000 spectators were watching a soccer match between France and Germany. Hollande has since been evacuated. A Vine posted shortly after the attacks appears to capture the moment of the explosion.

Update 2: Images from the scene at Stade De France show fans gathering on the field awaiting evacuation now that the match has ended.

Are The Attacks Connected?

According to reports, officials now believe that the attacks were coordinated and that at least 39 people have been killed in the attacks.

Update: Telegraph reporter Henry Samuels reported that gunmen at the Bataclan theater were yelling, "It's for Syria." At this time, officials have yet to speak about possible reasons behind the attacks.

Update 2: The AFP also reported that attackers yelled "Allahu Akbar" according to a witness. The phrase translates to "God is great."

Update 3: Les News reported that a witness claims an attacker at the Bataclan said, "This is the fault of your president," referring to French President Hollande. However, as of 8 p.m. ET, there is no official confirmation of who is behind the terrorist attacks or why the attacks occurred.

According to CNBC, U.S. officials see no credible threat to the U.S. at this time.

Update: While U.S. officials say they see no credible threat, the NYPD is reportedly exercising caution in crowded areas in New York, according to ABC News.

President Obama Speaks About The Attacks

The President added that he'd be communicating with French officials and "we'll be coordinating in any ways that they think are helpful in the investigation of what's happened."

He continued, "This is a heartbreaking situation and obviously those of us here in the United States know what it's like, we've gone through these kinds of episodes ourselves. And whenever these kinds of attacks happened, we've always been able to count on the French people to stand with us. They have been an extraordinary counterterrorism partner, and we intend to be there with them in that same fashion."

As of 5:30 p.m. ET, the Telegraph reported that officials say at least 60 people have died in the Paris attacks.

Update: Numerous reports now claim that at least 100 people have died in the Bataclan Theatre attack.

Update 2: As of 7:39 p.m. ET, The Telegraph reports that at least 140 people have been killed in the Parisian attacks according to an official from Paris City Hall. This renders the Paris attacks the worst on a Western city since the attacks in New York on Sept. 11.

On Twitter, residents near the shooting locations are offering safe haven by using the hashtag #PorteOuverte.

A State Of Emergency

Buzzfeed France reports that President Hollande has declared a state of emergency and all borders closed.

Update: On French television and radio, President Hollande addressed the attacks. "France must be strong in the face of terrorism," he said. "Terrorist attacks are taking place in Paris. It's a horror. We have mobilized all possible forces." The Telegraph reports that a cabinet meeting will be taking place soon and that the army has been mobilized.

Update 2: Paris is on lockdown, according to numerous outlets. This marks the first time there has been a curfew in Paris since the Nazis occupied the city in 1944. Bars have been asked to close, the Metro is shuttered, and Parisians are urged to stay home. In order to help those who do need to relocate, France 24 is reporting that Parisian cabs are offering free rides home to those in need.

Update 3: Numerous outlets including The Telegraph and the AFP reported that 1,500 extra soldiers have been deployed following the attacks.

Update 4: Many outlets reported that around 8 p.m. ET President Hollande addressed reporters outside the Bataclan and said that France will fight attackers "without mercy."

The World Stands With Paris

Facebook has created a Safety Check for those seeking updates on their loved ones in Paris and all over social media, in all corners of the world, people are using the hashtag #prayforparis to show their support.

At Wembley Stadium in London, the arch is lit up in red, white, and blue in support of France.

In New York City, the Empire State building was lit in a similar show of support.

And Dublin showed their support as well.