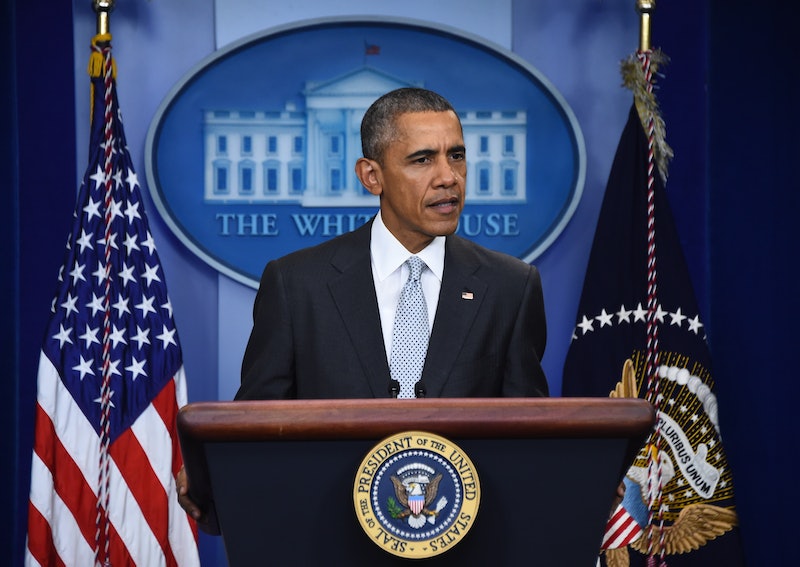 As Paris continues to be under siege with multiple shootings and explosions, President Obama has delivered a statement on the Paris attacks. Taking to press outlets, Obama called the incident "an attack on all of humanity and the universal values that we share." Currently, there are as many as six attacks tearing through Paris, with up to three shootings and at least three explosions. Dozens of people are dead, and as many as 100 people are being held hostage right now in a concert hall. In his remarks, Obama made sure not to assign blame to any specific group or individual, but he did use the term "terrorists" to describe the attackers.

Although Obama was careful not to "speculate at this point in terms of who is responsible for this," he is taking a firm stance on the U.S.'s response to the attacks. He told reporters:

We're going to do whatever it takes to work with the French people and nations around the world to bring these terrorists to justice.

He also called the attacks "a heartbreaking situation" and "an outrageous attempt to terrorize innocent civilians," vowing that the U.S. would "stand together with France." It has yet to be confirmed what terror organization the attackers are affiliated with, if at all, but many experts are saying that the attacks appear coordinated.

The latest development involved a fourth scene at Les Halles shopping mall in central Paris, where a third shooting was reported. According to a French radio station, there was "intense gunfire" at the shopping center in the 1st arrondissement. Some reports are now saying the death toll is 60 after two previous shootings and at least three explosions broke out in the 10th and 11th arrondissements. Other reports say that about 100 people are currently being held hostage at the Bataclan theater, where the rock band Eagles of Death Metal was playing.

In a brief statement Friday night, French President Francois Hollande, who was reportedly at the Stade de France when the explosions went off nearby and had to be evacuated, declared a state of emergency in France and closed its borders, and officials are urging residents to stay inside. Meanwhile, locals are using the hashtag #porteouverte (open door) to let others know they can seek shelter at their homes.

Here are the confirmed areas under attack In France: