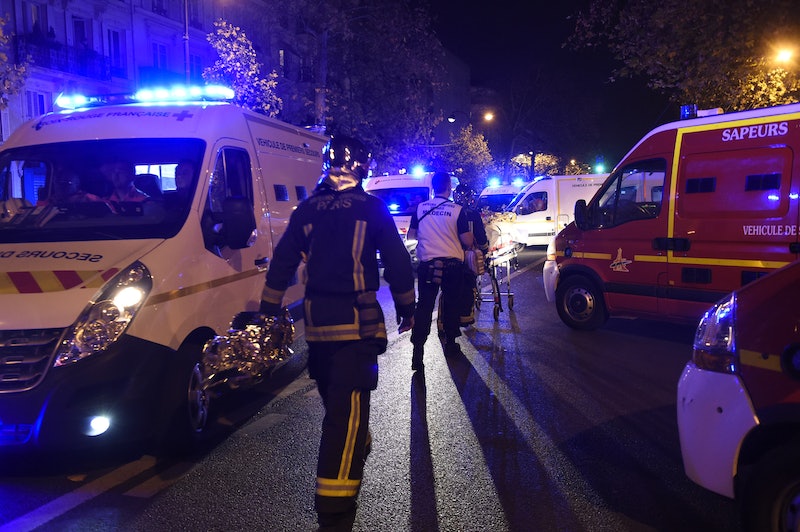 In the wake of a series of deadly terrorist attacks across the capital city of Paris in France, a swath of reactions began flooding the social media sphere. While the majority were heartfelt and conveyed a message of support, there were many who thoughtlessly felt it was more appropriate to highlight controversial issues rather than express sincere condolences. Some of the worst responses to the Paris attacks included not only sensitive content, but calls for discrimination against entire groups of people, the majority of whom had nothing to do with the monstrous attacks themselves.

"It really disturbs me to see so many Muslims hav[ing] to preemptively repudiate terrorists, when they make up the bulk of their victims," wrote one person on Twitter Friday night, commenting on news that the attackers had allegedly yelled "Allahu Akbar" (Arabic for "God is great") as they opened fire at the Bataclan concert hall, one of the scenes of Friday's string of terrifying incidents. According to official reports, the gunmen had stormed the hall in the middle of a rock concert and had taken as many as 100 hostage. Police later reported that many of the hostages had died in the ensuing standoff between the attackers and authorities.

Earlier: While the attackers themselves may have been affiliated with known terrorist networks (Islamic State militants have not yet claimed responsibility for the tragedies), many Muslims began voicing their support for the victims and their families and decrying the actions of the attackers instead. "I am a Muslim [and] I condemn the #ParisAttack," wrote one user. "Over 1.5 billion Muslims do. Please remember this."

Regardless of their pleas, that didn't stop the darker recesses of the Internet from voicing their misguided opinions anyway. Muslims weren't the only target of the enraged social media sphere either — here are a few of the worst responses seen so far and why you should avoid repeating them.

Whenever a terrorist attack occurs, the majority of social media responds in one of two ways: By showing emotional solidarity (this time with hashtags like #PrayForParis) or by condemning the people who most closely resemble the attackers, regardless of whether they were affiliated or not. Since news of the Paris attacks first broke, there's been a lot terrible anti-Muslim rhetoric floating around, none of it worth repeating here.

For obvious reasons, avoid generalizing all Muslims under one banner — remember, there are 1.57 billion of them across the globe, the majority of whom are non-violent. Terrorists are terrorists.

After news broke of the terror attacks in Paris, former House Speaker and swell human being Newt Gingrich decided to take to Twitter to voice his belief that concealed carry permits would have kept the massacre at the Bataclan concert hall from happening.

"Imagine a theater with 10 or 15 citizens with concealed carry permits," Gingrich wrote. "We live in an age when evil men have to be killed by good people." Gingrich's argument seemed to hinge on the age-old pro-gun adage that a good guy with a gun is the only way to stop a bad guy with a gun, conveniently forgetting that no such thing has ever been proven to be true.

In fact, it's just the opposite: several studies over the years, compounded by numbers out of the FBI, have proven time and again that concealed carry/open carry zones are in no way less likely to bit struck by mass shootings, nor are people with guns better equipped to stop a tragedy than those without. But sure, go ahead and keep telling yourself that 10 guys with pistols would have been able to stop dozens of gunmen in a crowded, noisy rock concert if it helps you sleep better at night, Newt.

"This Is Why We Shouldn't Allow Refugees!"

In a stunningly ignorant tweet on Friday night, South Carolina Rep. Jeff Duncan wrote, "How's that Syrian refugee resettlement look now? How about that mass migration into Europe? Terrorism is alive & well in the world. #No."

Here's the problem with that tweet: Everything. Even after Duncan attempted to clarify his remark in a subsequent tweet, it only served to undermine his own argument. "ISIS has said they will exploit the migration crisis," he complained. "FBI confirms we can't vet the Syrian refugees. I don't want them here."

By admitting that the Islamic State would be exploiting every possible outlet to continue its attacks, Duncan also confirmed that there was no way of knowing which channels would be hit next or which methods they might employ. With 12 million Syrian refugees' lives on the line, attempting to brand them all as terrorists is both irresponsible and illogical. As far as we know, there were just over 12 attackers in Paris on Friday. The disparate statistics here speak for themselves.