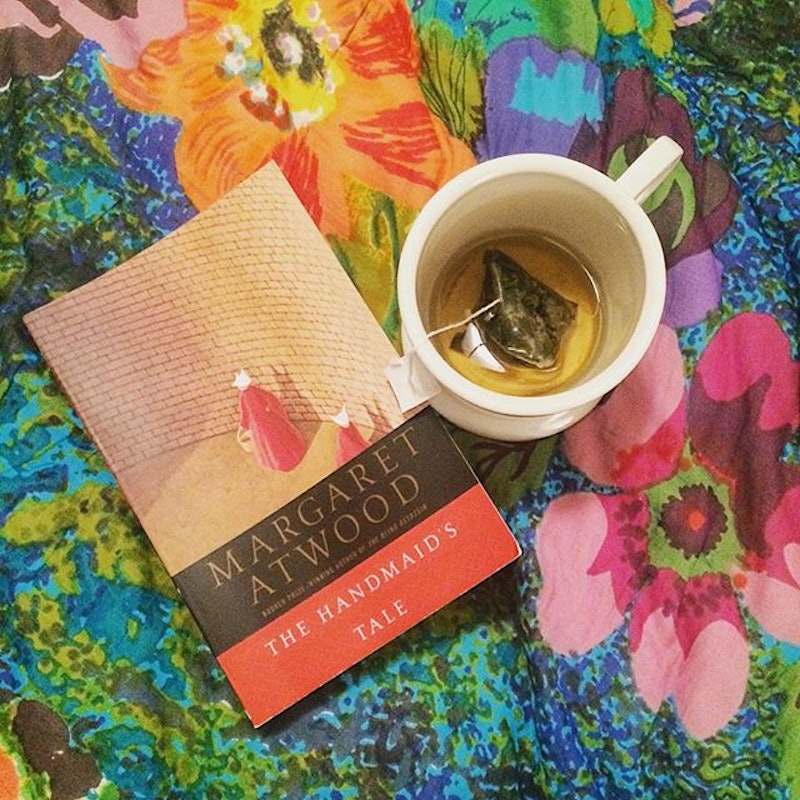 When asked for my favorite book as a child, and even as a teen putting together her Facebook page for the first time, I always cited the Bible as my favorite book. Part of me defaulted to that simply because I believed it was what I was supposed to say as a good Christian girl. But on the other hand, I did spend weekends loving reading about King David and the history of the kings of Israel and Judah.

It wasn't until I was in college that I learned the Bible could be understood as a work of literature. While I first felt more than a little blasphemous taking a class called The Hebrew Bible that wasn't listed under a religious studies section, what I learned revealed the beauty of the Bible as simply a good story with an intricate plot, extended metaphor, and beguiling characters.

When we hold any text up too highly as a religious book, we risk missing out on its true beauty. If we are constantly examining the Bible for ultimate truths, we will skim over the beautiful poetry in the Psalms or Song of Songs; we will miss the artful simplicity of the parables. It is these kind of moments in the text that supersede belief and enter in the mythic realm of storytelling archetypes that our greatest writers have latched onto.

It isn't difficult to find the influence of the Bible in classic, or even modern, literature. These writers themselves may or may not have believed in the Bible as a religious text, but that's not important here; what is important is that they recognized the beauty of the story and how Biblical figures could inspire some of our greatest novels.

This is probably the most obvious book inspired by the bible. The Garden of Eden is only a small part of the biblical creation story in Milton's epic poem; the majority of the action takes place in the far reaches of the heavenly (and hellish) realms, where we meet the angel Lucifer, who would rebel his way into becoming Satan. Strangely enough, Paradise Lost may leave you having more sympathy for the devil than anyone else in the narrative.

2. Lord of the Flies by William Golding

A classic of our days in high school, there's more to Lord of the Flies than a group of school boys run amuck on jungle island. While more closely about nature versus nurture and how individuals behave outside of the confines of civilization, as we understand it, Golding includes some startling biblical allusions, from the title referring Beelzebub, one of the names of Satan, to the saintly Simon, a stand-in for Christ.

3. The Red Tent by Anita Diamant

One of the most frustrating things about the Bible is the lack of women's voices. While women may figure in the narrative, playing important roles, it is rare to hear a woman tell her own story. Diamant's novel aims to change this by seeking Dinah, the daughter of the patriarch Jacob and sister of Joseph, and having her provide her perspective on some of the events in the book of Genesis.

4. The Fishermen by Chigozie Obioma

The biblical story of the first family — and first murder — is transported to Nigeria in the 1990s in Obioma's novel. When four brothers travel to the mythic Omi-Ala River, they encounter a seemingly mad drifter who predicts that one of the brothers will kill another. The allusionary weight of Cain and Abel hangs heavy over the family as they make their way forward.

While any of Robinson's books could easily fit on this list, her first novel focuses wholly on the experiences of women, biblical and non-biblical alike, attempting to foster spiritual spaces for themselves. While Ruthie and Aunt Sylvie could be stand-ins for any biblical figure who has been transient and without a permanent home, Robinson's allusion to the lost narrative of Noah's wife near the end of the book is powerful enough on its own.

6. Under the Udala Trees by Chinelo Okparanta

Throughout history, and even now, the Bible has been used to justify and moralize the mistreatment and subjugation of others. Okparanta details the chilling way the Bible is used to oppress LGBTQ individuals in her debut novel, which covers the years of the Nigerian civil war in the 1960s to the present. Compassion and love ultimately win, but Okparanta presents us with exacting questions of how we can use the narratives of the Bible for evil or good.

The story of King David and his rebellious son Absalom is more complex than a light reading of the Bible may betray, but in Faulkner's hands, the narrative possibilities of the story are fleshed out to encompass the history and turmoil of the American South, using Thomas Sutpen and his son Henry as the biblical king and prince.

8. The Secret Chord by Geraldine Brooks

There's a reason King David has multiple mentions on this list: his story is an endlessly compelling narrative of good and evil. Brooks gives him the historical fiction treatment, adding nuance to the man written as being completely "after God's own heart."

9. The Handmaid's Tale by Margaret Atwood

Sex in the Bible is often a fraught topic, brushed over and set aside in Sunday schools everywhere. Atwood borrows her dystopian and nightmarish scenes of the "ceremony" from the dysfunctional martial relations of the patriarch Jacob, his wives Leah and Rachel, and their handmaids, Zilpah and Bilhah. It also provides a chilling glimpse of Biblical ideas applied writ-large to a theocratic government.

What happens when the Prodigal Son doesn't return home? Paton's novel seeks to explore themes of faith against the larger backdrop of pre-Apartheid South Africa. Ultimately a story of forgiveness against difficult odds, Pastor Stephen Kumalo comes to embody the spirit of Jesus' teachings while challenged with finding his son.

11. The Complete Stories by Flannery O'Connor

Picking just one of Flannery O'Connor's stories or novels is difficult, so let's just go with her collected short stories. One of the foremost Catholic writers of American literature, she digs deep into the ugliness of humanity to reflect on the redemptive themes of the biblical Gospels.