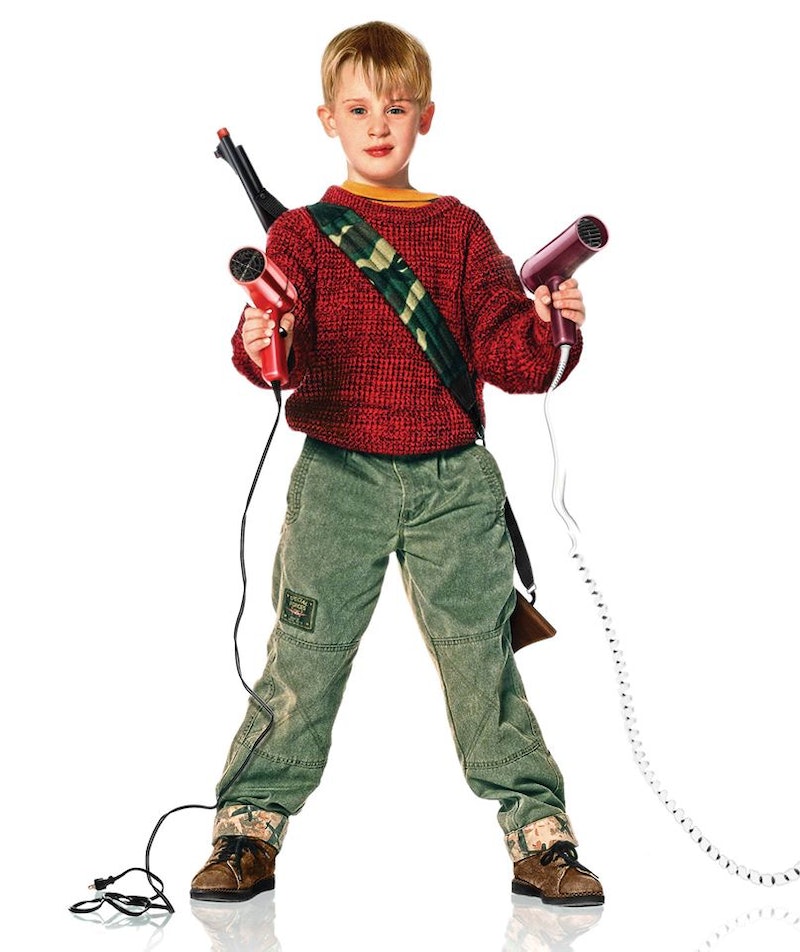 In the classic holiday movie Home Alone, the young Kevin McCallister (Macaulay Culkin) defends his family's gorgeous suburban Chicago home against two bumbling burglars. The boy's hilarious booby traps greatly injure robbers Harry (Joe Pesci) and Marv (Daniel Stern), but you have to remember that the house sustained damage in all that ruckus. So how much would it cost to fix the Home Alone house? I asked some real-life home fixers to assess the damage — and it's not cheap. The repairs to the McCallister house — the real-life 671 Lincoln Ave in Winnetka, Illinois — along with the neighboring Muprhy house — which was also robbed by Harry and Marv — would cost thousands of dollars.

When Kevin's family leaves for Paris over Christmas, they accidentally leave him (ahem) home alone in their immaculate house, which has four bedrooms and four bathrooms in its 4,243-square foot real-life space, according to Zillow. In 2012, the house was sold for $1.595 million, according to the Ashbury Park Press, so even 25 years later, the home is quite a jewel. But that also makes it quite expensive to fix up when Chirstmas chaos — and, in the case of Home Alone, when hilarity ensues with many robber-catching booby traps.

So, how much will all those repairs cost? Let's break it down — and all the prices are based on today's costs to repair.

Damage: Kevin climbs up brother Buzz's shelves in order to take his stash of cash, which is kept in a tin on the top shelf. The shelves collapse, but Kevin emerges with the money.

According to Michelle Collini of House Doctors Handyman Service, the five new 8-foot mounted shelves will cost about $150-200 in materials and $100 in labor.

"If there is any damage to the wall from the accident, they will need to repair the wall which could be up to $300," she told Bustle. "They would also probably need to replace the wall paper that is covering the wall. And most likely, could result in having to remove all of the wall paper and re-applying or painting, which may cost upwards of $800 labor."

Damage: Kevin heats up the door knob to be — literally — red hot.

If the heated door knob ever needs replacing, Collini says, "A nice entry door knob replacement could run anywhere from $100 - $300, and labor to install, could be about $100."

Tar On The Basement Stairs

Damage: Kevin spreads sticky black tar on the basement stairs to deter Marv from getting to the first floor.

While this sounds like a simple job, it's definitely not. Collini says it could take up to 10 hours to clean up, with about an hour spent on each step using sand paper, solvent, paint stripper, and steam. The materials would cost about $50, but the labor could be upwards of $1,000 ($100 per hour). "This would likely be mostly labor and could take a decent amount of time," she says.

Damage: Kevin makes a booby trap with a blow torch that fires on Harry's head upon opening.

The blow torch definitely made its mark on Harry, but if it marked up the back door, well, that'll need repairs, too. "If there was fire damage or burns to the door, you would likely need to replace the entire door," Collini says. A replacement door like the one the McCallisters have in the film would cost $250-500 and the labor would cost around $150-250.

Damage: Marv clogs the kitchen sink and leaves the faucets running at the neighboring Murphy house across the street for about two days. The basement and kitchens flood with water.

In Home Alone, Harry calls Marv a "sick person" for flooding the Muphy family home, along with all the homes of their victims as their calling card — and with good reason. The flooding and standing water at the Murphy residence will cause a lot of damage to the floors, walls, stairs, and cabinets of the home, as well as wrecking the basement — and that's all expensive to repair, according to Fred Cohen of Avalin Design Construction. "They've basically destroyed the first floor and basement," says Cohen, a general contractor who specializes in foundation work and seismic retrofitting.

In the movie, most of the water accumulates in the basement, which is mostly ruined, says Cohen. The drenched stairs from the basement to the kitchen will need to be replaced (around $4,000), along with the water heater (about $1,000), and the heating system (approximately $5,000). The basement walls will need to be refinished and that'll cost about $30-40,000. There's also the danger of mold. Although it's unseen in the film, this type of flooding in the basement could possibly lead to structural damage to the home's foundation. "Two days of two feet of standing water can cause a whole house to settle," Cohen says.

So Harry's right — Marv is a sicko. It's a good thing Kevin never let Marv flood up the McCallister house — for the sake of his family's wallet.

Damage: The McCallister's security system in the movie is merely "locked doors and timed lights."

Cost: Around $100 to install, plus monthly service fees

At the beginning of Home Alone, Harry sneaks inside the McCallister home dressed as a cop and spies on the family's lack of security system. Plus, the family is thrown for a loop when a power outage happens the night before they depart for Paris. "It wasn’t enough 25 years ago, and it definitely isn’t enough today," says Liz Tanner, Director of PR at Vivint Home Security. "Even when there are power outages, smart home companies, like Vivint, use backup power to keep functioning and securing the home."

There's also a sequence of the film in which Kevin's mom Kate struggles to get in touch with Kevin, because the phone lines are down, it's Christmas, and, you know, she's all the way in Paris. Aside from 2015's always handy cell phones, new security technologies would've made communication much easier between mother and son. "When Kevin woke up to find himself alone, he could rely only on his ingenuity," Tanner says. "If the McCallisters had a Vivint system, Kevin could have pressed the panic button on the control panel and would have been connected with a Vivint representative in seconds."

Through today's technology, Kate could've checked on Kevin via cameras, while Harry and Marv would've been thwarted by motion and window senors. "Needless to say, Harry and Marv wouldn’t have had a chance against the McCallister’s smart home of today," says Tanner.