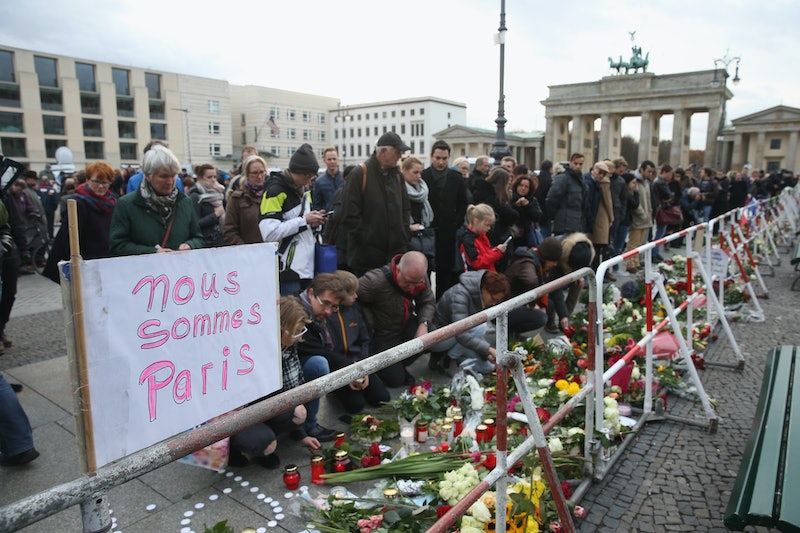 Nearly 130 people were killed and hundreds more were injured Friday night after six terrorist attacks unfolded in the heart of Paris, causing chaos in the City of Lights. On Saturday, the ISIS claimed responsibility for the Paris attacks, which French President Francois Hollande condemned as an "act of war" by the militant Islamist group. The deadly assault on Paris is the latest in a string of violent ISIS attacks over the last week, including two suicide bombings in Beirut.

These attacks have triggered a new wave of Islamophobia, inspiring Muslims worldwide to stand up and defend their religion, emphasizing that ISIS does not speak for Islam. By Saturday, the hashtag #MuslimsAreNotTerrorist was trending on Twitter in the United States.

"I am Muslim I am not a Terrorist Qur'an Teach's [sic] me to love everyone," some Muslim Twitter users wrote. Others reminded the world that people of all religions commit horrible acts of violence in the name of religion and God, while some Twitter users claimed yelling "Allah" before committing violence does not signify that the person is a Muslim. Of course, many stated what should not have to be said — that ISIS, an extremist militant group, does not reflect or represent Muslims worldwide.

"In the name of the Iranian people, who have themselves been victims of terrorism, I strongly condemn these crimes against humanity and offer my condolences to the grieving French people and government," Rouhani said.

Shuja Shafi, secretary general of the Muslim Council of Britain, released a statement Saturday calling the attacks "horrific and abhorrent" and not a representation of Islam. "This attack is being claimed by the group calling themselves ‘Islamic State’. There is nothing Islamic about such people and their actions are evil, and outside the boundaries set by our faith," Shafi said.