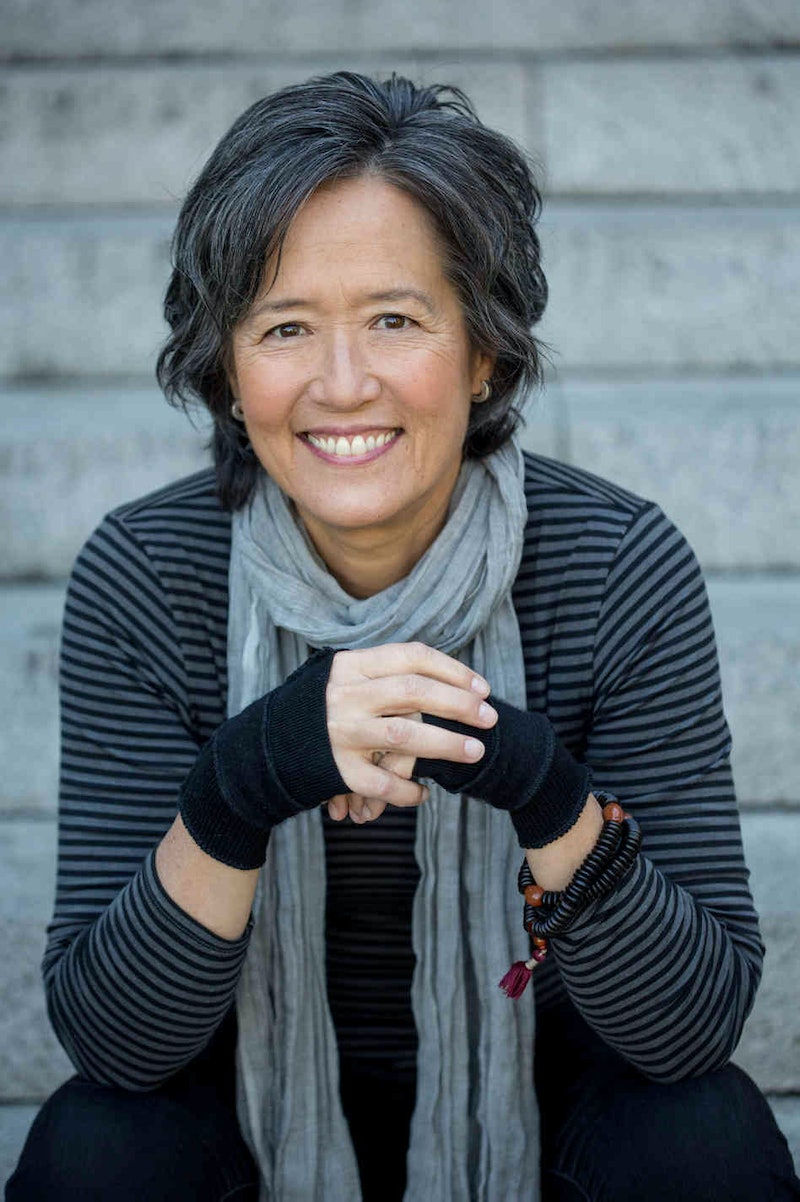 What's a time being? You, reading this, are a time being, along with everyone else who is, was, or has been. And we're all floating around, bumping into each other at random, like bits of trash in the Great Pacific Garbage Patch, the massive body of debris and trash floating in the Pacific Ocean. The GPGP is in the middle of a gyre, a circular-moving current of water that draws in and traps debris. Condoms, plastic six-pack rings, plastic bags, water bottles, marine debris all float and whirl in the GPGP.

The GPGP is a key catalyst and image in Ruth Ozeki's A Tale for the Time Being. The diary of Nao, a 16-year-old Japanese schoolgirl, acts like the patch of flotsam and debris that carried it from Japan: it forcefully draws in Ruth, the novelist who finds it while walking on her Canadian beach. As Ruth reads about Nao's life in Japan — the abusive bullies at her school, her wise Buddhist grandmother, her unemployed and depressed father — she finds herself absorbed in the girl's story. And the reader is sucked in with Ruth. A central theme is this relationship between reader and writer: how a writer can shape the reader's life, how the reader can identify and feel kinship with an improbable writer.

This is the fourth novel from filmmaker and Buddhist priest Ruth Ozeki, and her Tale is a stroke of the most wonderful fortune. I talked with Ozeki about her book, the idea of "now," Buddhism, and how Tale came to be. We met for coffee in the West Village on a blisteringly cold day in January.

BUSTLE: I want to know how you feel about author interviews. Do you enjoy the opportunity to reflect on a book and how it's interpreted?

One of the problems with authors interviews is that inevitably, you start repeating yourself over and over. Anybody who writes or understands story or genre understands that the way you create farce and comedy is through repetition. Anything you repeat often enough becomes funny. And it loses its reality, it loses its authenticity, and it loses its seriousness.

So that's the downside of it. The upside is when you're asked things you've never been asked before. It can be a great chance to reflect on process, and very often a question will spark an insight that you haven't had before.

I ask because I just read a New Yorker blog post that questioned the whole practice of interviewing authors and the attempt to make authors celebrities.

Absolutely. In a way, it's absurd, because my work is over. My job is completely done. It's been done for a long time now. I haven't made any contribution to the making of this book since a year ago — a year and a half ago? Something like that. So the book has nothing to do with me anymore! It doesn't belong to me anymore. So there's nothing I can say. I can't give you any insight into this book, because it's not my book. It's our book.

The neat thing about novels is the novel is a field of interaction, a field of collaboration. So it's my job to create the parameters of that field, and then I propose it to the world, and then you and other readers step into the field. We collaborate. We create this world. And to go back to this idea of quantum many-worlds, the Tale for the Time Being that you and I create is different than he [she gestures to a stranger] and I create, or whatever. It's a many-worlds phenomenon. The worlds proliferate, which I think is very cool.

But in a cynical note, you quote Milan Kundera [in a footnote to Nao's description of her blog]: “Once the writer in every individual comes to life (and that time is not far off), we are in for an age of universal deafness and lack of understanding.” Is that something you believe?

No. But I enjoy that he thought of this back in 1975, long before anyone knew about the Internet.

Right. I love his prescience. I love that he thought of it back then. And there is some truth to it: in a way, we do live in a world of universal deafness. We do. It's not that I disagree with him, it's just that I agree that the Internet is not just contributing to universal deafness. There are other things going on involving understanding and access ... we have the ability to know a little bit about a lot of things, which is usually a good thing, as long as we don't conflate that with actual understanding.

I identified with Nao's discussion of the notion of "now." It doesn't really exist, especially for a writer, who's constantly trying to catch the reader up to speed. How do you make yourself present?

In terms of techniques and practices, I am a meditator. It's a tried and true practice that's all about being in time. I mean, that's what meditation is: to be in time. That's all you do. You're just sitting there and being in time; you're not doing anything else! So that makes it pretty easy to drop into the moment when you're writing and to stay there.

But there is something very beautiful about writing by hand — the idea that with the nib of a pen, you're inscribing. You don't get that same idea of the slow emergence of language. The millimeter by millimeter language emerging through line, through word, through sentence, through paragraph.

The character Ruth longs for New York while she's living in British Columbia. Do you miss this place while you're away?

What do you miss?

Everything. Coffee. But actually, aside from theater, museums, library, cultural institutions, interesting people and all of those kinds of things, what I really miss? Anonymity. You'd think going to an island in the middle of nowhere is a great place to be alone, but it's not. If you really want to be known, move to a small community. It's wonderful, too — I don't mean to diminish that. Because of course, the flipside of New York is that it's easy to feel lonely in a big city. Both have their merits and demerits.

I haven't, but it's a good reminder. Like everyone else, I want to read the whole collection. I'm going to take her collection on the road with me on my book tour. Unfortunately I think I'll have to bring it on iBooks.

Ah. I haven't made the transition yet.

Don't, if you can help it. It totally changes the experience. Right now I'm reading A Writer's Diary, Virginia Woolf's journal, and I am not reading it on my iBook. [I smile.] You know it?

I read all her works my senior year, and it was the most excellent thing. The discussion of the experience of the moment is so Woolfian, actually.

It's so beautiful. If I could just be a bit more like her, as a writer...

Wouldn't you be happy? I really think I would.

Besides Munro, do you have other favorite Canadian authors?

I've always liked Carol Shields. Yann Martel — I liked Life of Pi very much. Margaret Atwood, of course. I especially like Margaret Atwood's essays. In particular, there's that beautiful essay "Negotiating With the Dead." It's a really beautiful article about how through the act of writing, we speak across time. Writing is the act of negotiating with the dead. I was reading that while working on Tale, and it very much influenced me.

My favorite character in Tale was Jiko [Nao's grandmother, a Buddhist nun]. Could you tell me about the Jiko figures in your life?

I don't know that I have any; she was kind of a wishful thought. But I also like to think we all have our own inner Jikos, the archetypal character who serves as a moral compass. She's very much a part of our folklore — both our public folklore and our inner folklore. So I think that's why people like her: they recognize her, because we all have one.

There were definitely influences, though. I see a lot of my mother in Jiko. And my grandmother. There's a real Buddhist nun, Jakucho Setouchi, who you can read about on my Weblog. She was a writer — still is ... She's most famous for translating Tale of Genji from ancient Japanese to modern Japanese. When she was a young woman, she wrote about sex from a woman's point of view. And when she translated Tale of Genji, she focused on the experiences of the women. Yeah, like I said, she's pretty cool.