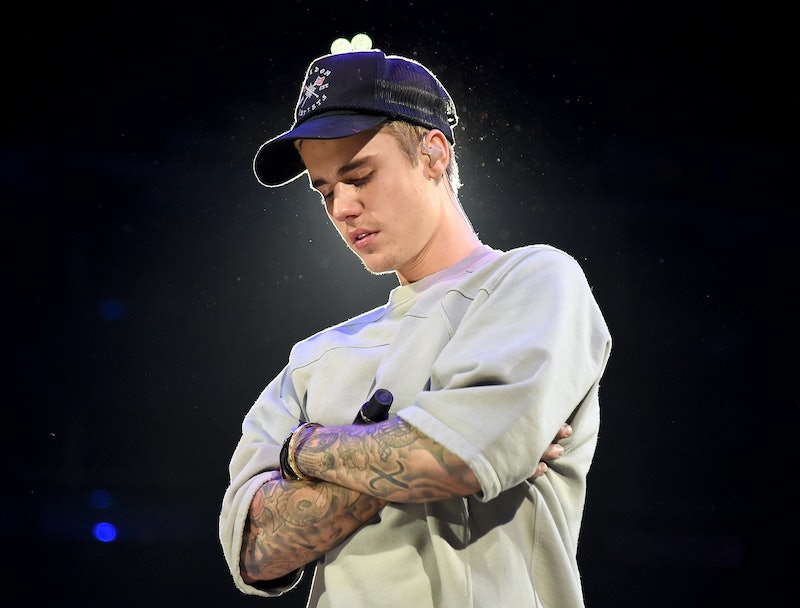 Stop what you're doing, clear your schedule, grab a seat (you're going to want to be sitting down for this): Justin Bieber will release a new video for Purpose every hour Saturday. He's already dropped eight installments of the full-length album visuals, and they're slated to keep coming. In total, an entire movie, Purpose: The Movement will comprise each of these musical moments. They're directed by Parris Goebel, the New Zealand choreographer-producer-director who also brought the Sorry video to a YouTube channel near you.

The video event opens with a black-and-white, documentary-style excerpt in which Bieber revisits his personal and musical evolution — if Purpose was meant as an apology to fans and peers for the way he's behaved since entering the spotlight, "Mark My Words" is the crystallization of that wish to repent. "I feel like I lost my purpose for a while, and now I feel like I found my purpose and I just want to bring that hope to people," he says. A slow-motion video of tearful fans clambering for Bieber plays as he speaks, showing extracts from television appearances and concerts.

The videos seem to follow in a similar vein to artists as diverse as Beyonce and Sigur Ros, both of whom released album-length videos to accompany and visualize their music. For Bieber, it seems to be more of a proclamation that he's back. "If Justin did it, then I can do it," he says before the footage cuts to the "Mark My Words" video, with Bieber standing on a grand piano, singing over a desert backdrop. And that's when the main event begins.

It started Saturday morning and is scheduled throughout the rest of the day for each of Purpose's tracks — and if Bieber really loves his fans, it'll be for the 18-track deluxe edition.