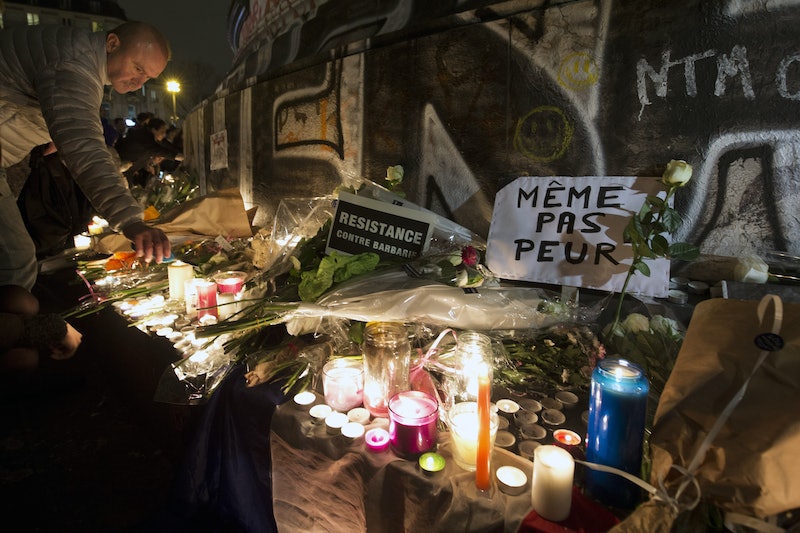 Just one day after a series of deadly attacks on the capital city of Paris, France, French authorities released the official death toll at a press conference. According to police, 129 were killed across multiple locations, and an additional 352 were injured. Police also stated that at least 89 of those fatalities occurred during a hostage standoff at Bataclan concert hall in central Paris. Three terrorists were also killed, two detonating suicide bombs and one having been shot down by police.

As of Saturday evening local time, 99 of those injured were still in critical condition, Paris prosecutor Francois Molins told reporters. Authorities also confirmed that 70 of the victims were Americans. As the prosecutor began detailing the timeline of events, details about the attackers began to emerge.

According to Molins, the first event occurred just outside of D gate at Stade de France, where French football players were hosting Germany in a friendly match. Police said that a suicide bomber approached the gate and detonated a belt with explosives, killing one bystander. Not too far from the stadium, the prosecutor reported, another man opened fire on 25 diners inside a bar, 15 of whom were killed. At 9:30 p.m. local time, a third attacker's body was found outside of the stadium's H gate wearing a similar explosive belt around his waist. Within minutes, five more people were killed in a fourth attack in the nearby 11th district, after a gunman began indiscriminately shooting a small crowd standing in front of a bar.

Across the city, at Bataclan concert hall, 100 victims were taken hostage after gunmen entered the building and began shooting. After an intense standoff, police initiated an assault on the attackers, who then detonated two suicide vests. Eighty-nine of those inside the hall were killed. Each of the suicide attackers' vests were identical, Molins added.

The Islamic State has since claimed responsibility for the series of attacks, several of which targeted restaurants, including popular Cambodian restaurant Le Petit Cambodge in the busy 10th district. Molins confirmed that one of the attackers, a 35-year-old man, was found deceased near the stadium with a Syrian passport on his person; however three additional men were also stopped at the Belgian border Saturday and arrested in connection with the Paris attacks, and at least one of them was a French national. According to prosecution spokesman Jean-Pascal Thoreau, the men were detained after the license plates on their rental car were matched with those of a vehicle spotted near the Bataclan concert hall the night before.

The French national was identified during Saturday's press conference as a 29-year-old man. According to police, the man was from the southern suburbs of Courcouronnes, just outside of Paris, and had been known by the police since 2004. Molins stated that the man had been flagged as an extremist in 2010.

As updates on the victims began rolling in, one of the injured Americans was identified as Helen Jane Wilson of New Orleans, Louisiana. Wilson had been in attendance at the Bataclan theater when the attackers opened fire on the crowd at the Eagles of Death Metal show on Friday night. According to a friend who spoke with The Times-Picayune on Saturday, Wilson had been shot twice in the leg and was undergoing surgery at L'hopital Saint-Antoine in the city's 12th district. Wilson had been watching the show with a friend who later died in her arms, according to a former colleague.

During Saturday's press conference, Molins confirmed that the vests used in the suicide attacks had been packed with TATP, or triacetone triperoxide, an explosive mixture made with common household chemicals. A 2007 New York Times report indicated that the substance had been used in several Palestinian suicide bombings and was thought to have been used during the 2005 London Underground attacks as well (during the London attacks, the bombers packed the substance inside backpacks). TATP is difficult to detect, even with bomb sniffing dogs.

While Saturday's press conference did much in the way of clearing up a number of confusing details, the number of victims could still rise, given the scores of injured still deemed critical. "The death toll is provisional and could increase," Molins told reporters.