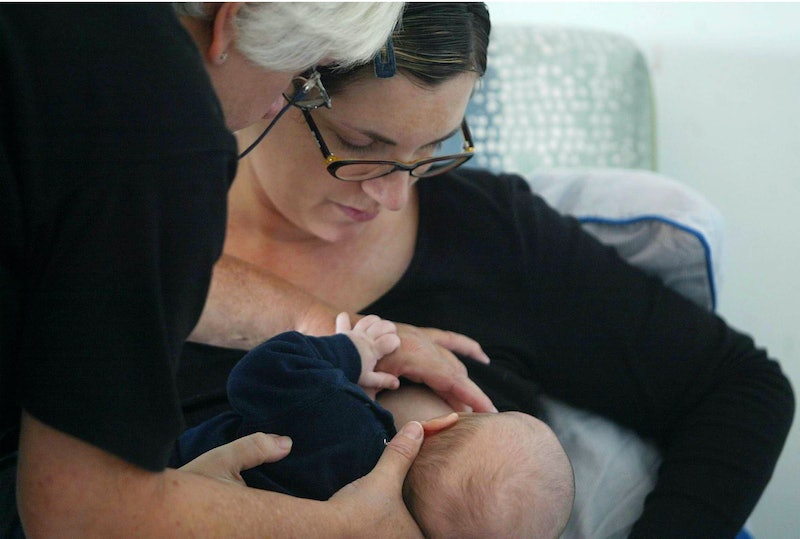 Breast-feeding — one of the most personal, natural, physically painful and calorie-burning parts of being a mother — is pretty popular in the U.S. Last year, 77 percent of new moms breast-fed their babies, up from 71 percent ten years ago. In some states, that number is even higher: Idaho sees 91.8 percent of mothers breast-feeding their kids. Pope Francis' recently okayed breastfeeding in church, and Gisele has made it look very glamorous on Instagram. Yet still, somehow, breastfeeding is a right that women are being forced to fight for.

Take the case of Bobbi Bockoras. The American Civil Liberties Union (ACLU) and the Equal Opportunity Employment Commission (EEOC) are filing a civil suit on Bockoras' behalf — the first lawsuit to be brought by the ACLU under the breastfeeding provision of the 2010 Affordable Care Act (ACA). Why? Because Bockoras' company, Saint-Gobain Verallia North America, told her to pump in a bathroom and then, after she refused, forced her to use a dirty bug-infested locker room, where she was mocked and harassed by colleagues. Complaining only made matters worse — the company reassigned her to alternating day and overnight shifts that messed with her feeding schedule and stopped her from producing milk.

All that is prohibited by the ACA provision, which requires that companies give “reasonable break time for an employee to express breast milk for her nursing child for one year after the child’s birth” and “are also required to provide a place, other than a bathroom, that is shielded from view and free from intrusion.” (Bathrooms are usually unhygienic and using them is associated with premature weaning). It also prohibits "retaliation" on the part of the company should an employee complain. But it only applies to companies with 50 employees or more, and those have to be hourly employees, not salaried ones. Most worryingly, it includes no penalties for businesses that break the law, so it's not clear how courts could make them comply — the ACA took effect three years ago and since then, a whopping 42 percent of the 169 investigations into the breastfeeding provision were found to violate the act.

“Women who choose to continue breastfeeding when they return to the paid workforce face insurmountable obstacles that can make them choose between their jobs and what is in the best interest of their babies,” said the ACLU senior staff attorney who is representing Bockoras.

Bockoras' lawyers are arguing that, not only did the company clearly violate the breastfeeding provision, it also violated Title VII: Bockoras' right to not to be discriminated on the basis of pregnancy, something which could have major implications for other nursing mothers. Somewhat confoundingly, breastfeeding rights aren't always seen to be protected via Title VII, because lactation isn't necessarily linked to pregnancy. In 2012, U.S. District Judge Lynn Hughes wrote that: “Lactation is not pregnancy, childbirth, or a related medical condition” — and therefore not protected from sex discrimination.

Verallia North America has filed a motion to dismiss the case, stating that it was “committed to providing a respectful workplace” and “takes its obligations under the law very seriously and is committed to abiding by all federal and state employment laws.”

This lack of support for breastfeeding seems to be echoed in the American public. A 2001 study that used national public opinion surveys found that only 43 percent of American adults thought that a women should have the right to breastfeed in public. And — in spite of the fact that breastfeeding has been linked to higher IQs, and, recently, a lowered risk of developing rheumatoid arthritis — women who choose to nurse in public are often shamed and stigmatized.

"[It would be an] obvious and enormous statement to bring the whole matter under the purview of sex discrimination laws,” a breastfeeding expert told NBC News, but also added that, even so, the ruling still wouldn’t necessarily mean that penalties would be forced on companies that didn't comply with the ACA requirements.