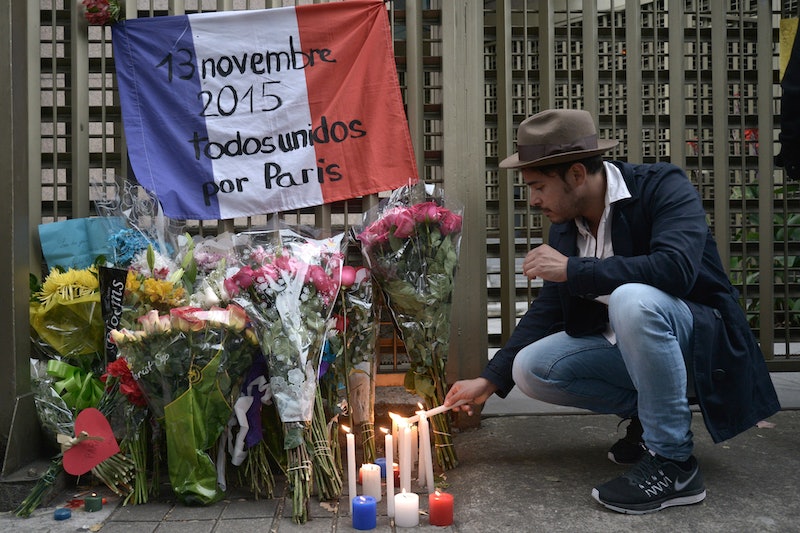 One day after six terrorist assaults left more than 120 people dead and 300 wounded, the names of the Paris attack victims have been released. In the immediate aftermath of the Friday night attacks, the identities of the hundreds of victims weren't known, and people took to social media to let loved ones know they were safe or try to find someone they knew was in the area of the attacks. The shooting at the concert hall the Bataclan had the most victims — 89 according to The New York Times.

Another single terrorist set off a suicide bomb outside the gates of the Stade de France, where France and Germany were competing in a soccer game. France midfielder Lassana Diarra said his cousin, Asta Diakite, was killed in one of the attacks, according to CNN, but it's unclear which assault. CNN also reported that Valentin Ribet, a Parisian lawyer and 2014 graduate of the London School of Economics, Lola Salines, who worked for the La Boucherie de Paris roller derby team, Guillaume Decherf, who worked for the Les Inrockuptibles magazine, and Amine Ibnolmobarak, an architect and teacher at the ENSA Paris-Malaquais architecture school, died Friday night.

A California State University, Long Beach student, Nohemi Gonzalez, was the first American victim identified. According to NBC News, she was killed in a Paris restaurant that was attacked Friday night. The 23-year-old was a senior design major spending a semester abroad at the Strate College of Design.

"She was a great girl, one of the best," Gonzalez's aunt, Sandra Felt, told NBC News. "She planned her whole trip to Paris — always a go-getter, very organized person. She worked to save money for her trip." Felt said her niece always dreamed of studying in Paris and learning French. "Why a beautiful young lady, who had so much to offer, and her life was going so well for her? How could this happen to her? She was always cautious about everything," Felt told NBC News.

Two Universal Music employees, Thomas Ayad, an international product manager for Mercury Records, and Marie Mosser, who worked in digital marketing and communication, were killed at the concert venue.

A 36-year-old British man, Nick Alexander, was killed at the Bataclan, according to The Telegraph. He was reportedly shot in front of Helen Wilson, an American expat who was wounded in both legs. Wilson, 49, is originally from New Orleans and runs the Rock en Bol catering company in Paris.

Three Chilean citizens were killed at the Bataclan, according to CNN — Luis Felipe Zschoche Valle, who lived in Paris for the past eight years, and Patricia San Martin and her daughter, Elsa Veronique Delplace. Martin and Delplace were the niece and grandniece, of the Chilean ambassador to Mexico, Ricardo Nunez.

More like this
Scotland's First Period Dignity Officer Has Sparked Backlash
By Darshita Goyal
25 Things I've Reduced My Life To, In Addition To WFH In My PJs
By Ginny Hogan
Why Eurovision 2023's Host City Won’t Be Revealed For A While Yet
By Sam Ramsden and Rachel Mantock
Dunkin’s Pumpkin Spice Latte Is Officially Back This Week
By Mia Mercado
Get Even More From Bustle — Sign Up For The Newsletter