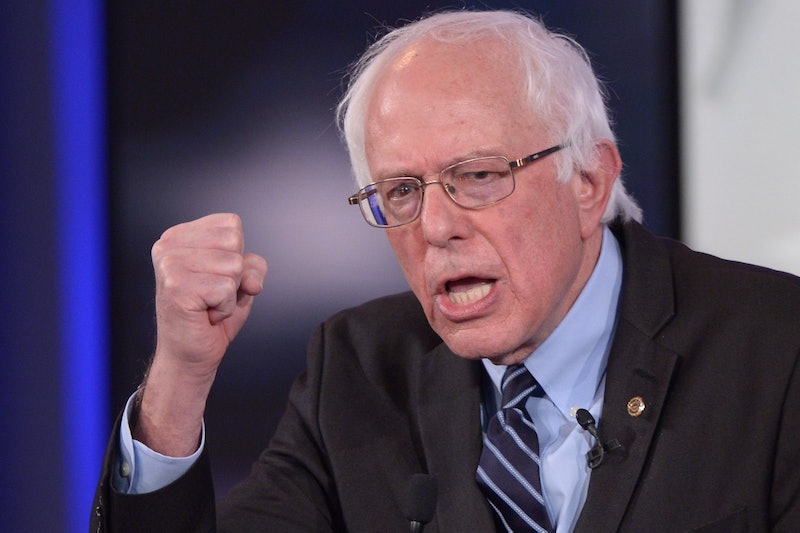 Bernie Sanders promised us a revolution, and it looks like he's gonna give it to us. During Saturday night's Democratic presidential debate, moderator John Dickerson asked Sanders to take us on a journey to his hypothetical presidency of free college, legalized pot and no Wall Street cabinet members — and man, did Sanders take us there. Sanders promised us a "politician revolution" and no, Republicans, it's not the revolution you're hoping for.

Dickerson posed to Sanders that the political revolution may have already happened in America — but on the right side of the aisle. The Vermont senator, who identifies as a democratic socialist, gave a rousing call to action that may extend far beyond his fiery Feel the Bern movement.

The revolution's already happened, Sanders said. And if you're wondering, it's not being led by the Tea Party or Donald Trump.

"We are going to do a political revolution, which brings working people, young people, senior citizens, minorities together," Sanders said. "Every issue I am talking about...is supported by a significant majority of the American people."

The Vermont senator jumped into a list of a number of progressive policies, including free public college, paid family leave, an expansion of Medicare to all U.S. citizens, and a $15 federal minimum wage. These are issues, Sanders said, that are not out of reach in America — even an America that's seriously considering President Trump.

"Political revolution is about bringing people together," the Vermont senator added. "To say, 'enough is enough.' This government belongs to us. Not just the billionaires."

So, what can we expect from a Sanders' political revolution in 2017? The progressive senator promises paid family and medical leave for everyone, increased taxes on the wealthy, a livable minimum wage, affordable access to higher education and, of course, the decriminalization of marijuana. Wall Street, too, should be prepared to get crushed in this revolution scenario.

How does Sanders' political revolution fair with the average American? When it comes to income inequality, Sanders is right: Americans do want to see the income gap closed. However, Americans also can't seem to come to a consensus on the right way to go about it. For example, a New York Times/CBS News poll released earlier in 2015 showed that while an overwhelming majority of Americans favor raising the federal minimum wage to $10.10 an hour, the majority of Americans oppose increasing the minimum wage for hourly employees such as fast-food workers to $15 and hour.

The political revolution may happen, but we still have a long way to go, Bernie.