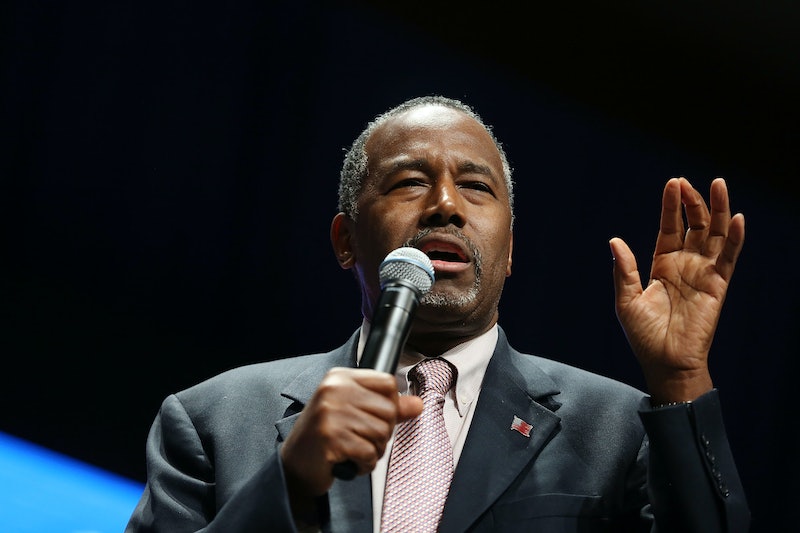 Saturday Night Live really heats up when political campaigns do. I'm sure that people who were looking for SNL's brand of political humor were disappointed after the episode hosted by Donald Trump, which went super soft on its host despite Trump's obvious wealth of raw material. But the show is back this week, and it's got a different political candidate in its sights: Ben Carson. During the Elizabeth Banks-hosted SNL episode on November 15, they did a sketch called "The Adventures of Young Ben Carson," which makes fun of the candidate's exaggerations about his past, the odd things he's said during his campaign, and the strange things that have come out about his personal life during the campaign.

Cast member Jay Pharoah takes on the role of Carson, and his impression is oddly accurate. He picks up on the measured way Carson has of speaking, even when he's saying inflammatory things. "Like a Muslim in the White House, you don't belong," he said in a completely even keeled manner, even though he's supposed to be angry. (He keeps this calm tone even when attacking other people in the sketch, poking fun at Carson's exaggerated claims to past violence.)

The wildest lines from the sketch, though, weren't written by the writers of the show. They're actually things that Carson has said.

Each time the sketch referenced an outlandish Carson opinion — "People go into prison straight, and come out gay," for example, or "If evolution was real, we'd have the fossils to prove it, and those fossils don't exist" — the sketch paused to cite Carson as the true author.

It's good that they did, because otherwise people would say that the writers had gone too far. It ends with references to Carson's portrait of Black Jesus and their opinions that Egypt's pyramids are ancient grain silos. Trump's SNL sketches were too tame for the candidate; Carson had no idea that, with his campaign, he was basically writing his own parody.