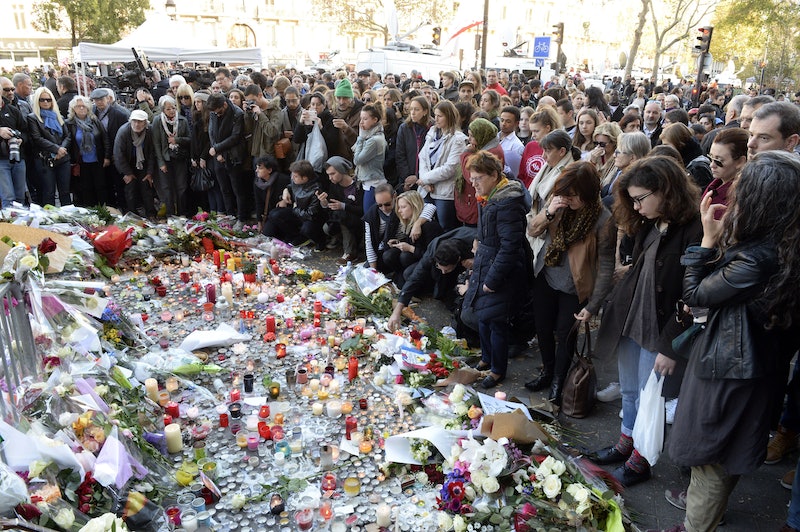 Authorities in France are taking suspects into custody after attacks left more than 120 people dead, according to CNN. ISIS has claimed responsibility for the attacks and President Francois Hollande has called them "an act of war." Where can you donate to help the Paris attack victims and their loved ones? There are a few specific organizations that are providing assistance on the ground.

Most recently, BBC News reported that French officials found a black car with weapons in it in Montreuil, a suburb in eastern Paris. Authorities believe that this getaway car could be evidence that some of the attackers got away and used another car to drive north to Belgium. So far, only one of the seven dead attackers, Ismail Mostefai, has been identified. Investigators are questioning people close to him, and Paris chief prosecutor Francois Molins told reporters that there were probably three coordinated terrorist teams behind the attacks, according to BBC News.

As officials investigated, Paris mourned the dead, who are slowly being identified. About 350 people were injured and at least 99 of those people suffered serious injuries, according to CNN. Thankfully, there are a number of organizations doing on-the-ground work in Paris to help the injured and the families of those who were killed. Here are four specific organizations you can donate to in order to help the survivors and the victims' families get the care they need.

The French Red Cross announced on its Facebook page on Friday that it was sending 300 volunteers to help victims, according to Mashable. It doesn't have a specific campaign set up for the Paris attack victims, so any money you donate will go to the organization's overall efforts (but I'm sure that donations will only make their campaign more effective and speedy). You can donate here.

If you want a symbol of your solidarity, you can buy a t-shirt from Kind Is Kind on Etsy. The shirts sport the now popular peace sign with the Eiffel Tower in the middle and 100 percent of the proceeds go to Doctors Without Borders, according to a tweet from Kind Is Kind. Find the t-shirts here.

Secours Catholique-Caritas France helps the poor, but is also providing assistance to victims and victims' families in the aftermath of the tragedies in Paris, according to USA Today. The organization is also urging Muslim families who feel stigmatized to come to its prayer sessions and engage in dialogue with volunteers, according to its website. You can donate here.

Standing in solidarity via social media is a great way to show support, but donating to one of these organizations will help provide tangible, physical help to those who need it most.