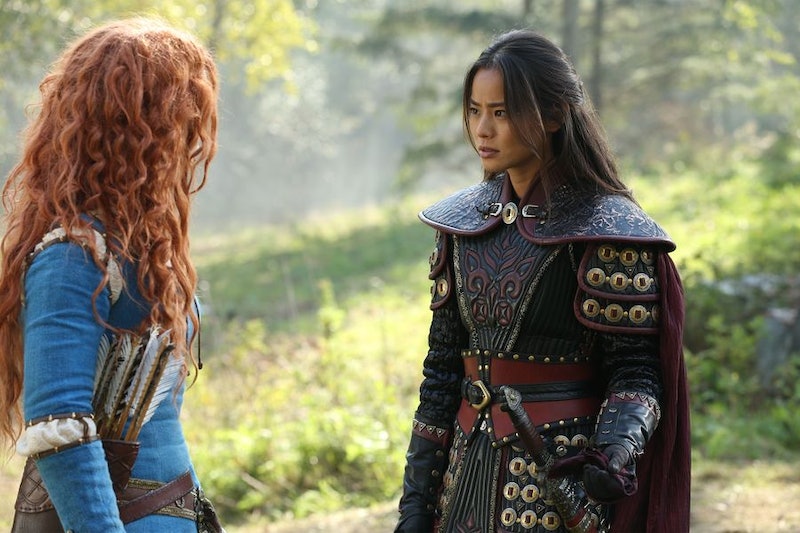 After years and seasons of waiting it's finally here. Mulan is back on Once Upon a Time , and friends with Merida, no less. But, as much as I dig their "we can fight just like the boys" attitude, I do NOT want Mulan and Merida to be a couple, and, fortunately, I don't think the show is going that way. Look, I want Mulan to be happy, and, after she had her heart broken by Aurora, she deserves that. I also would love for OUAT to feature a homosexual relationship, I just don't want it to be between Merida and Mulan.

The thing that is so great about Merida is that she and Brave proved to people that sometimes the princess doesn't have to end up with a prince. She can choose herself, her family, her land, and her royal duties over love and that's totally OK. And, think about it, back when Brave came out, many people accused Disney/Pixar of making her a lesbian. Because, of course, if a girl doesn't want an arranged marriage at a young age that definitely makes her gay. No. What's powerful about Merida is she proves that sometimes you can choose not to choose love. Now if OUAT makes her gay for Mulan it's defeating the whole thing the movie set up.

But, OUAT seems to get that too. Instead of a Mulan/Merida pairing, they seem to be pushing a Mulan/Ruby relationship. I'm 100 percent on board with that. Plus, the actress who plays Merida said her character has no time for romance, anyway.

"Definitely not," Amy Manson told TV Line when asked if there was true love in the cards for her on the show. "No, the mission for her is too big. The only people she could be with are the clansmen — and they just kidnapped her brothers, so it’ll take a lot for her to forgive them."

I love the Merida and Mulan friendship though, and I think the show can keep it just as it is — two badass girls who prove that women can be just as strong as men and just as good, if not better, at fighting for the things they love. I'll get behind that #SquadGoals any day.