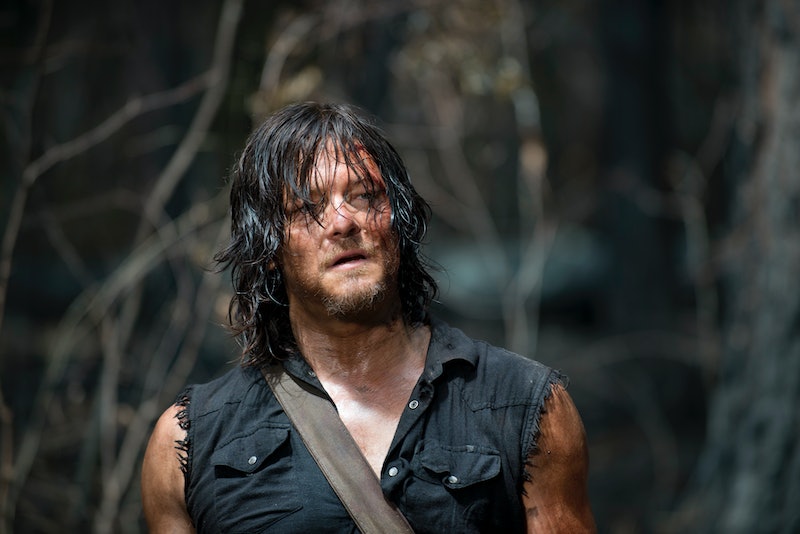 At first I was annoyed that The Walking Dead went out of it's way, yet again, to give us a side adventure rather than getting the group back together and showing us Glenn's body, dead or alive. However, Sunday night's story had some major ramifications in the post-apocalyptic universe. Who attacked Daryl on The Walking Dead ? Could these vagabonds who mugged our favorite badass and took both his bike and his crossbow be connected to the Saviors from The Walking Dead comics? What are they doing with glass? The Wolves are pretty scary, but these guys are downright mysterious.

Early in the episode, while trying to get back to Sasha and Abraham, Daryl was taken hostage by three survivors named Dwight, Shelley, and Tina, who, while armed and dangerous, weren't exactly the sneakiest. They openly discussed their plans in front of him. We could tell that they had run away from some kind of group. They were really anti-kneeling or reporting to anybody, which must be a clue as to their group's identity. They were also convinced that Daryl was one of them, which means the group was large enough to get lost in.

Later on in the episode, the people that these three were running from caught up with them — sort of. I'm still not sure how they managed to escape by just hiding. We saw very few faces — just one man who got bit (amateur) and another, named Wade, who chopped his infected arm off like it was nothing. The fact that this group was shrouded in secrecy means that they are probably not the Wolves and that they are definitely significant. Could they be the Saviors? The Wolves were teased early on in Season 4, so it makes sense that we should start getting hints of the Saviors about now, especially since Deadline's report that Jeffrey Dean Morgan will be playing their leader, Negan.

I think it's also possible that this "truly unique kind of sh*t show" is the Hilltop Colony as well. In the comics, Hilltop is similar in size and function to Alexandria, which checks out with what Daryl's new "friend" Dwight was describing. Hilltop Colony is, at one point, overrun with the Saviors, so this could be another way for Negan to be introduced on The Walking Dead after so long.