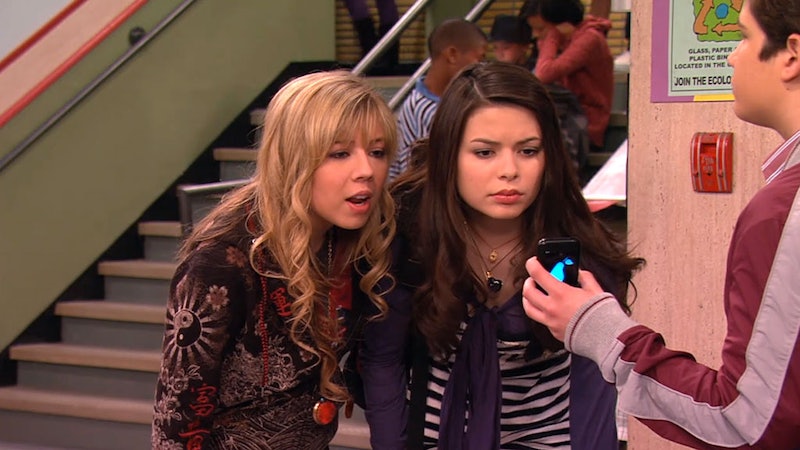 All right, so it hasn't been all that long since iCarly was on the air. In fact, compared to most nostalgia shows, it hasn't been off the air long enough for the nostalgia to really set in. However, that doesn't mean there aren't a wealth of kids and adults out there who are about to feel really old knowing that Nathan Kress has gotten married. Kress, who played Freddie Benson on iCarly, married his Into The Storm cast mate London Elise Moore on Sunday, and, even better, the iCarly cast reunited to attend the wedding. Miranda Cosgrove (Carly Shay), Jennette McCurdy (Sam Puckett), and Jerry Trainor (Spencer Shay) all piled into a car together to attend the wedding, and we have photographic evidence of what is sure to be a golden nostalgia moment in, you know, five years or so.

iCarly aired its final episode in 2012, and then McCurdy went on to reprise her role as Sam Puckett in Sam & Cat alongside Ariana Grande, before the show was cancelled. Cosgrove has an upcoming sitcom called Crowded in the wings, while Trainor starred on Nickelodeon show Wendell & Vinnie and made a cameo in Sam & Cat. As for Kress, well, in addition to acting, he got married even though he's three years younger than me and spent five years playing a teenager on TV. BRB, I need to take a moment to come to terms with the fact that, wow, I'm old.

However, I'm not the only one having this kind of age crisis. Cosgrove posted a picture of herself, McCurdy, and Trainor on their way to the wedding, with the incredibly relatable caption, "Heading to @nathankress's wedding. Being old is so fun."

Cosgrove later posted another photo, this one of the photobooth pictures that she took with Trainor and McCurdy at the ceremony. If this doesn't give you all the Spencer, Sam, and Carly feels, then I don't know what will. While the iCarly fandom was notorious, like most fandoms, for the intensity of the 'shipping wars that broke out between the two camps who wanted Freddie with either Sam or Carly, it was also a place where you could find people who were ride or die for these characters and their differing relationship dynamics with one another. To see the actors behind those characters still hanging out, even three years after they've lost any legal reason to be in the same place at the same time, is just plain adorable.

So, instead of sighing over Kress' wedding because he's off the market and/or made you realize that you're in your mid-'20s already, it's better to congratulate him and be thrilled that he's letting you relive your iCarly feels all over again. Seriously, could this cast get any cuter?