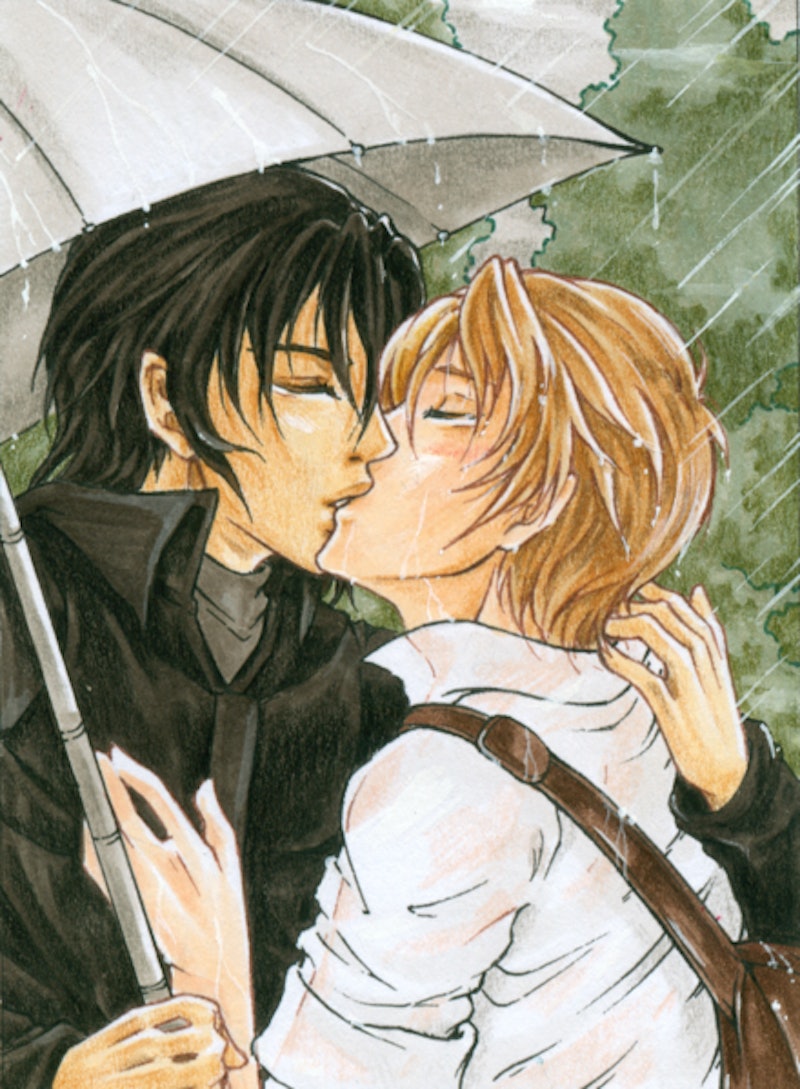 Do you think the words "slash fiction" refer to novels that involve a lot of swordplay? If so, you haven't spent much time hanging around fan fiction websites. Fanfic, as it's also called, is written work that takes original media — from Benedict Cumberbatch's Sherlock to the Harry Potter series to obscure TV shows — and elaborates on it, with the writer creating their own narratives using the core characters and conceits of the pre-existing creation. Slash fiction — named for the slash that separates the two main characters in the story description (for example, "Sirius Black/Severus Snape") — is a subgenre of fanfic that focuses on pairing up two characters (usually male) and describing their time together, often explicitly.

Fan fiction is perhaps most well-known by the general public for launching the career of E.L. James, whose fan-written reinterpretation of the Twilight series became 50 Shades Of Grey, the publishing phenomenon-cum-film series that made stores across the world sell out of handcuffs. But while many fans have been interested in slash fiction for decades, the genre is increasingly gaining attention from psychologists and scientists, who are keen to study the interests and desires that fuel its production and consumption. It is, after all, incredibly popular: online slash fiction databases offer hundreds of millions of stories.

So what should we know about slash fiction — and if you're already a fan, what do experts believe your interest in it says about you?

1. It's Part Of A Global Landscape Of Similar Media

The Economist brought some mainstream attention to yaoi and slash in general this week, when they reported that comics depicting homosexual male relationships were hugely popular in China among young women. The Economist reports that the genre, called danmei, is read by an estimated 275 million people in China — a figure which isn't entirely surprising to anyone who has paid attention to global trends in sexuality over the past few years.

Danmei is far from the only genre around to focus on depicting male romantic pairings for a female audience. In Japan, there is a manga subgenre called yaoi devoted to the topic, with its own myriad variations, sub-genres and particular rules of behavior. Different from yaoi is the manga subgenre shonen ai , which is focused on romantic, non-sexual relationships between very young boys. Yaoi has been the subject of a lot of controversy in its time, coming under criticism claiming that the comics are "unrealistic" about gay men and depict them as sexual commodities rather than real people.

Danmei itself has been targeted by the Chinese government; sites devoted to the genre have been closed down systematically since 2007, and mainstream media outlets in the country have suggested that fans might need "psychiatric help".

According to many estimates, the vast majority of yaoi consumers are young women — for instance, attendees at the 2003 Yaoi-Con in San Francisco were reported to be 80 percent female. When it comes to the gender breakdown of the folks who read and create slash, the vision is a bit less clear, as many authors remain anonymous and obscure their gender. But the overall picture seems to be that young women are the dominant consumers and producers of fanfic focusing on romantic relationships between men, whether it's slash, original fiction, or visual media. Scholar Camille Bacon-Smith has called the slash fiction space "a new kind of community, that fulfills women's needs to reach out and be heard" — though these days, it's increasingly clear that the readership has broadened and now includes all different kinds of readers of all genders.

Unfortunately, some academics have taken the gender breakdown of slash and yaoi fans, and extrapolated a lot about the genre while relying on gender stereotypes. According to Carola Katharina Bauer, scholars now often refer to slash fiction and other media focused on male romantic pairings as a "women's genre," and the discussions of it can include a lot of stereotypes about women liking intimacy, happy endings, and romantic complications, rather than depictions of explicit sex. One famous book about slash, Warrior Lovers , even claims that women consume media about romantic couplings between men because of human evolution: women have "evolved" to want security and romance, rather than sexual adventure. Slash fiction and its counterparts have led to long discussions about "what women really want" — and though some of the discussion may be correct about the motivations of some readers, it's a mistake to make these kinds of sweeping generalizations about all readers.

3. It Can Be A Safe Place To Explore Your Sexuality

According to Lady Geek Girl, a survey of 10,000 users of a particular slash fiction site uncovered something interesting: many of the readers of slash identify somewhere on the queer spectrum of sexuality. This is a contradiction of the common belief that only straight ladies write and read this stuff. Instead, it looks like there's quite a lot of queer lady involvement in the creation of slash and similar works — and likely both straight and gay men create slash and similar media, as well. And part of that may be because it's a safe place for exploration.

The Huffington Post points out that slash fiction and its counterparts are, for many young women, the first "acceptable" method of sexual exploration that they discover as teenagers. Exploring sexual content, whether producing or consuming it, is an important part of many peoples' sexual development, but while many male teens have access to everything from mainstream pornography to Victoria's Secret catalogues, female teen culture doesn't necessarily have the same sexually exploratory elements built in to it.

Embracing slash can also be a way to challenge gender and sexual norms: in her essay "Confessions Of A Lesbian Feminist Slasher," Dale Rosenberg points out that "slash challenges gender assumptions and social ideas about masculinity and femininity, both in its content and its distribution. It's a sexually explicit form of fiction written primarily for and by women depicting men." Consuming this erotica, in other words, is a way of figuring out what you want and what you like in a safe space.

4. It Has Been Criticized As Homophobic

In Elizabeth Woledge's "Intimatopia: Genre Intersections Between Slash And The Mainstream,", she points out that slash fiction often doesn't really offer much discussion of the idea of being gay or LGBTQ, and sometimes views male sexual intimacy as a kind of logical consequence of two men hanging around each other a lot. "Much slash fiction has been criticised," she writes, "for its supposed homophobic implication that its heroes are not gay but just two men who love each other." Modern LGBTQ issues are left largely out of slash — and then there's the criticism often levelled at yaoi and other related visual media, which is that they make gay sexuality into a kind of simplified zoo for straight female eyes.

Many producers of this kind of media push back against this accusation. "I've always assumed that if men like watching women together, women might enjoy the reverse," Elanor Summerton, who runs a slash fiction website, told The Guardian. And Japanese theorist Dr. Akiko Mizoguchi has pointed out that a lot of contemporary yaoi actually tackles LGBT issues head-on, touching on about equal rights, gay marriage and other themes of acceptance.

5. It Might Allow Young Women To Explore Their Sexuality Without Sexualizing Themselves

Some scholars believe that the idea of slash fiction, yaoi, danmei and other purely male-homosexual genres are actually a way for female viewers to escape society's sexual demands and roles for girls — by entering a space where what is expected of women no longer matters. Japanese novelist Kaoru Kurimoto has written that girls "are constantly classified based on how they look, how they fulfill female-gendered functions, how they perform as home maintenance machines," and that yaoi (and, by extension, all kinds of media based around around this particular vision of male sexuality) presents "a place where the gaze of men and society doesn't exist, and where they themselves — always the objects of that gaze — don't exist either".

As Professor Deborah Tolman told the Huffington Post, “It’s a way of writing about sex without writing about girls; there’s still a minefield for girls to act on their desires, on their sexual feelings.” To sexually explorative teens and young women, slash and similar media takes their own bodies, gender roles and problematic sexuality out of the equation, and lets them just focus on what they like to think about: pretty young men.

More like this
Black Women's Equal Pay Day Highlights An Upsetting Problem
By Brandi Neal
7 Symbolic Meanings Of Autumn — From Letting Go To Self Preservation
By Kirsten Nunez
She Founded American Girl To “Bring History Alive.” Then She Made Over A Town.
By Amanda FitzSimons
10 Must-Read New Books Out This Week
By K.W. Colyard
Get Even More From Bustle — Sign Up For The Newsletter