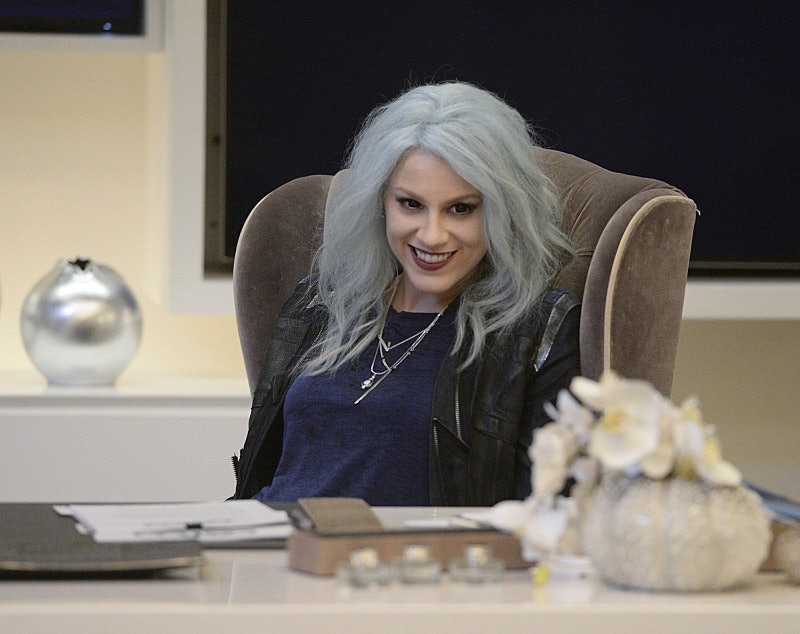 Already this season, Supergirl has welcomed a number of DC Comics characters, like photographer James Olsen, CatCo founder Cat Grant, and, of course, the Man of Steel himself, Superman (albeit, in a blurry, hazed shot from Supergirl's perspective). In terms of villains, last week we were introduced to Superman baddie Reactron, and there will undoubtedly be many more ahead. First up, Livewire, aka Leslie Willis, will appear on Supergirl this Monday, since CBS switched the episode order. So who is this electrifying new villain?

In the original comics, Leslie was a radio shock jock in Metropolis who criticized everyone, even Superman — think Howard Stern, but with superheroes. She was transformed into Livewire while on stage at a concert during a thunderstorm; when Superman tried to push her out of the way of a lightning strike, she stepped on live wire (get it??) that had been hit by the lightning, sending a surge of electricity through her and changing her appearance. Because of his involvement in her accident, Leslie blamed the Man of Steel and dedicated her new life to seeking vengeance.

In DC's relaunch of its comics, The New 52, Livewire's origin was changed slightly to update her character for a modern audience. Instead of being a shock jock, she's a vlogger known for pranks and makeup tutorials who gets electrocuted while attempting to reroute the power in the city to spell out a dirty word that would be visible from space (not going to lie, this version of Leslie Willis sounds pretty great).

As for the version of Leslie that will appear on Supergirl, it seems the show's producers have combined these two origin stories and added in a dash of originality for their take on Livewire, played by Brit Morgan. Based on the synopsis from CBS, Leslie will be "a volatile CatCo employee" who is transformed into Livewire by an accident. The CatCo connection suggests it's safe to assume that her origin in a media job will be the same, but whether it's as a shock jock, a vlogger, or something else entirely is still a mystery — though she does quip about Supergirl's 15 minutes of fame in a preview for the episode, which could be a clue.

Additionally, Livewire blames Supergirl and Cat Grant for the accident that granted her the electric powers, and will seek vengeance on both women. I have no doubt that Supergirl will win this fight — maybe with some help from Cat — but Livewire could still make for a shockingly entertaining villain.