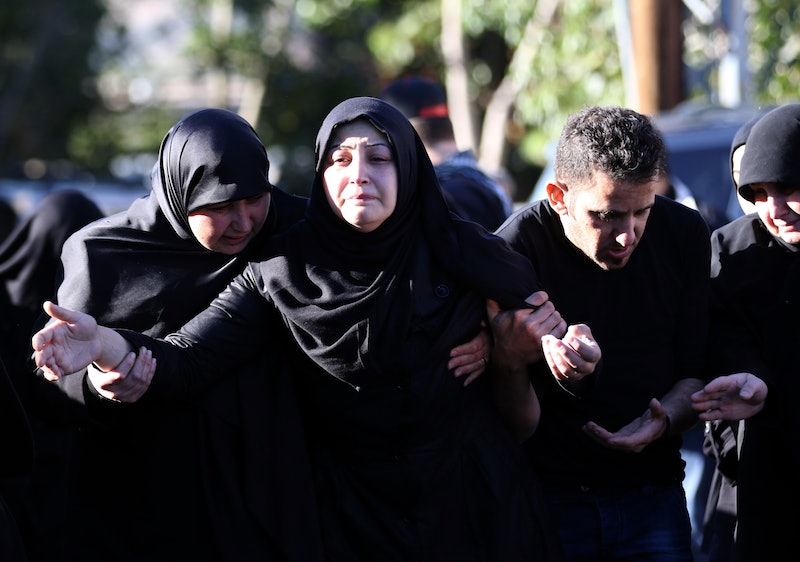 A tragic series of terror attacks paralyzed the capital city of Paris in France on Friday, as gunmen and suicide bombers swept through several restaurants, bars, and a concert hall, taking hostages and opening fire indiscriminately. In the hours that followed, citizens across the globe gathered to grieve, many struggling to come to terms with the devastation, which took the lives of at least 129 people. But while the scale of the destruction was shocking, it also managed to pull the public's attention from a similar incident nearly 2,000 miles away. What happened in Beirut, Lebanon, on Thursday was largely forgotten in all the chaos.

"When my people died, no country bothered to light up its landmarks in the colors of their flag," Lebanese doctor Elie Fares wrote in a blog post referenced by The New York Times on Monday, citing the public outpouring of support following the Paris attacks, in which numerous countries lit up recognizable buildings and monuments with the colors of the French flag. "When my people died, they did not send the world in mourning [because] their death was but an irrelevant fleck along the international news cycle, something that happens in those parts of the world."

Thursday's incident in Beirut was indeed a tragic one. And while the details of the attack are still rolling in, police have so far been able to paint a basic picture of what happened that day.

In one of the worst terror attacks to hit Beirut in 25 years, two suicide attackers on Thursday detonated twin bombs in the southern suburb of Burj al-Barajneh, killing 43 and injuring another 200. According to Lebanon's state-run National News Agency, the attacks targeted an open air market and were spaced less than 500 feet apart at around 6 p.m. local time, during the city's busy rush hour.

Before the twin blasts, Burj al-Barajneh was a lively shopping district. With its cluttered streets and fresh fruit and vegetable stands, the shop-lined roads attract thousands of visitors and vendors each day. According to police, the attackers chose to target one of the neighborhood's crowded bakeries first.

Within minutes, as strangers began scooping up the wounded and attempting to carry them to safety, a second suicide bomb was detonated yards away, just outside a local hospital. "There's a lot of shattered glass on the street," reported shaken CNN journalist Tamara Qiblawi at the time. "A lot of blood ... it's really just a scene of chaos and carnage."

The Shia-majority region of Burj al-Barajneh has long been known as a "Hezbollah stronghold," which was likely the reason the attackers, who called themselves "soldiers of the Caliphate," chose to target the city. Police in Beirut reported Sunday that nine men had been arrested in connection with the twin bombings, seven of whom were reportedly Islamic State (ISIS) militants out of Syria.

"The detained include seven Syrians and two Lebanese," Interior Minister Nuhad Mashnouq said in a news conference on Sunday. "One of them a [would-be] suicide bomber, and the other a trafficker who smuggled them across the border from Syria."

Locals told reporters that the attacks had come as a huge shock for the city which had finally started settling in — even kicking back and having a little fun — following years of civil war.

"It's been a year... with no explosions," one woman told Reuters in the aftermath of Thursday's horrific bombings. "We thought we were done with this, but were proved wrong yesterday."

Although the Islamic State militants that targeted the city gave no specific reason for the attacks, their motives may have stemmed from the growing tensions between Shi'ite Hezbollah fighters (based in Lebanon) and ISIS itself, across the border in Syria. There, Hezbollah's soldiers are actively waging war against ISIS by supporting Syrian President Bashar al-Assad.

Further complicating the matter are two major Middle Eastern powers, Saudi Arabia and Iran, with the latter standing strongly in defense of Assad's tumultuous regime. In contrast, Saudi leaders (most of whom are Sunni-Muslim) have backed rebel efforts by militant groups to oust Assad for the past decade.

Despite what many on social media claimed in the days following the gruesome Beirut blasts, the media did report extensively on the incident. However, with geopolitical complexities that rival a doctorate level thesis on quantum physics, the majority of the public seemed to either be uninterested in the story or unable to grasp the details. And so Beirut was relatively forgotten.

My peers throughout the media have dutifully and diligently covered such attacks for years. Local reporters and foreign correspondents out in the field have of course done far more than I have, spending days interviewing victims and painstakingly reconstructing events — despite knowing that readers were all but certain to ignore the stories. "Nobody is going to read this" is a phrase we've grown accustomed to hearing.

Of course, part of the blame for this seeming public indifference could be placed on the fact that the two attacks — in Paris and in Beirut — happened within just hours of one another. Certainly, sensory overload and the brain's stubborn reluctance at processing multiple tragedies at once aren't unbelievable.

Perhaps no one is to blame. It could simply be a matter of bad timing — that readers and news junkies everywhere simply hadn’t had enough time to grieve the Beirut attacks before another story hit the headlines. Now that the dust has begun to settle however, it’s important that both the public and the media take more time to sift through the ashes of that that day and figure out what went wrong.