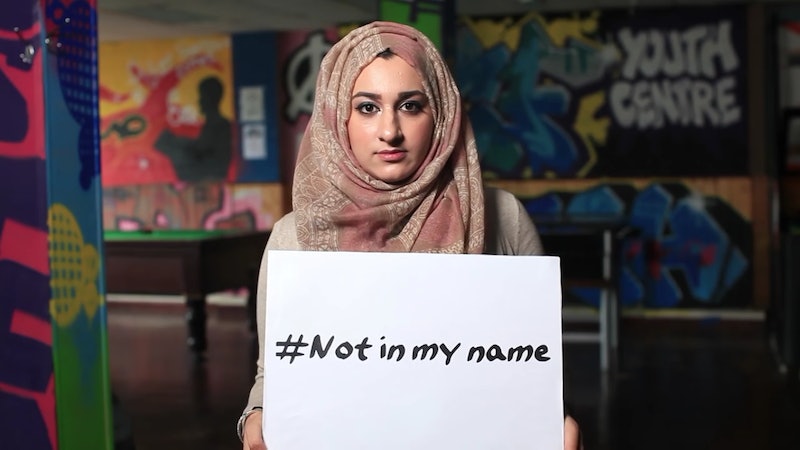 The attacks in Paris over the weekend have understandably reawakened fears all over the world of terrorism and ISIS. But as we seek to understand who is responsible for this atrocity and why, it is equally important to maintain our empathy and humanity. While millions have expressed sorrow and solidarity with the people of France, some people might have forgotten that Muslims comprise a huge number of those who are condemning this devastating act. You can read their declarations firsthand thanks in part to #IAmAMuslim and #NotInMyName, a movement of Muslims who have taken to Twitter, Facebook, and other social media platforms to decry the killing of innocent people. As of Monday, thousands of Muslims have spoken out against ISIS and other extremist groups who claim to be killing in the name of God. These courageous folks are making it clear that ISIS and other extremists do not speak for all Muslims. Not even close.

Muslims shouldn't have to feel like they have to defend themselves at all. Islam is a peaceful religion that values the preservation of life, and furthermore, the large majority of human beings want to co-exist in harmony. Regardless, Muslims across the globe have taken to the internet to denounce extremism. Thanks to social media, we can all hear the voices of the ordinary and high-profile individuals who are speaking out against violence.

The Australian journalist for ABC News, originally a refugee from Afghanistan, grew up in Sydney and is an advocate for social justice. In 2014 she gave an impressive TED Talk about her personal story.

Khan is a British businesswoman and appeared in 2005 on the UK's version of The Apprentice. She was the runner-up.

Almost 1,500 people have shared a Facebook post by Ibrahim, an imam and teacher in Australia. "This criminal barbarity is Godlessness. Terrorism has no faith & cannot be condoned by any means, rationale or ideology. We must commit to each other to defeat it," he wrote.

Iranian president Rouhani said in a statement, "In the name of the Iranian people, who have themselves been victims of terrorism, I strongly condemn these crimes against humanity and offer my condolences to the grieving French people and government."

The Pakistani computer engineer has been active on Twitter over the weekend, defending Muslims and promoting interfaith cooperation.

The Oregon-based Palestinian activist provided this wonderfully clear recap of the basic tenants of Islam via Twitter.

Baig is an environmental economist, freelance writer, and contributor to The Nation. She published a piece after the Paris attacks on why moderate Muslims need to speak out against extremism.

Dr. Mattson is a scholar, professor of Islamic studies, religious leader, and was the first woman to serve as president of the Islamic Society of North America.

Shafi is the Secretary-General of the Muslim Council of Britain. After the attacks on Paris, he said "This attack is being claimed by the group calling themselves 'Islamic State.' There is nothing Islamic about such people and their actions are evil, and outside the boundaries set by our faith."

Freelance journalist and feminist Khan has been an outspoken critic of both terrorism and Islamophobia.

The prominent academic and professor at Oxford University said in a statement after the attacks, "Absolute and immediate condemnation. They shouted, we are told, 'Allahu akbar" (God [is] the greatest) to support and justify their inhuman actions. With this they told a lie and a truth. Their lie is related to Islam and its message as not even one of its teachings, ever, can justify their actions. These acts are the result of minds inhabited by the worst, or minds without minds, manipulated or manipulators."

Kimouche founded a well-known French Muslim blog called Al Kanz, according to USA Today. He condemned the attacks on Paris while expressing fear of further Islamophobia. "The Muslim community is in mourning like the rest of the French, but also in the anxiety of retaliation," he said.

The president of Indonesia, the largest Muslim country in the world, said in a statement that "Indonesia condemns the violence that took place in Paris" and urged all international powers to fight the spread of terrorism.

CAIR, a Muslim social justice group, released a statement almost immediately after the attack, denouncing the violence. "We condemn these horrific crimes in the strongest terms possible. Our thoughts and prayers are with the loved ones of those killed and injured and with all of France. The perpetrators of these heinous attacks must be apprehended and brought to justice." CAIR is part of a coalition of Muslim organizations in the U.S. that held a press conference on Saturday to condemn the attacks.

These are only a few of the thousands of outspoken Muslims affirming their solidarity with France in the wake of Friday's terrorist attacks. If you want to know more about these individuals and organizations, wonderfully, they're just a Tweet away.