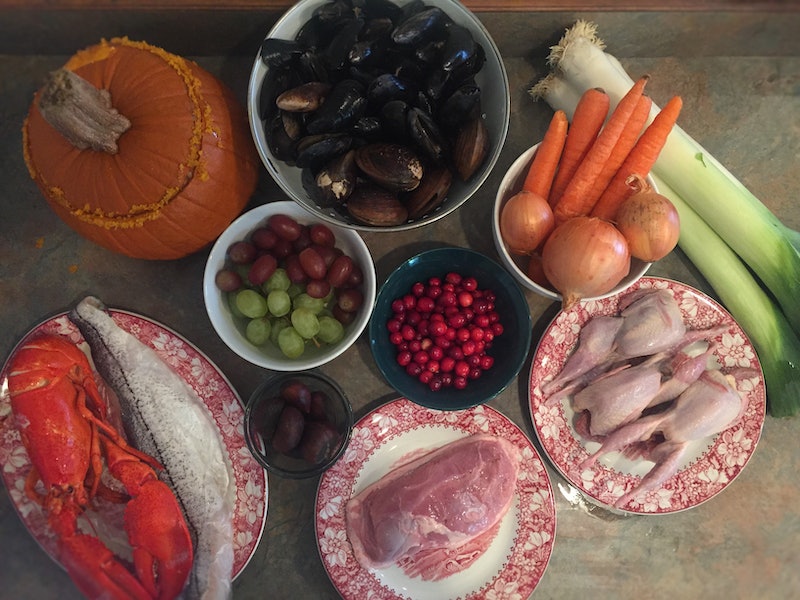 Growing up in Massachusetts, Thanksgiving has always been a big deal for my family. My small town is situated less than an hour from Plymouth, where the first Thanksgiving was celebrated, and though I've visited many times to see how the settlers lived, I have never tried to recreate the first Thanksgiving meal that the Pilgrims and Wampanoags shared in 1621. What was eaten at the first Thanksgiving, anyway? Are the buffet tables at my mom's house, the ones filled with turkey, mashed potatoes, and cornbread stuffing, representative of the food they had in Plymouth nearly 400 years ago? I tried to make the original Thanksgiving meal, and you might be surprised to find out how different it is than the one you are used to eating.

Before I could try recreating it, I had to find out what the first Thanksgiving menu even looked like. While a modern Thanksgiving meal includes whipped potatoes, bread-based stuffings, and sweet pies, the Pilgrim's Thanksgiving was easier on the carbs, and a whole lot heavier on the protein. According to early settlers' records of what went down on the first Thanksgiving, many of the dishes were meat and fish-based, and the sides were made up of mostly fruits, vegetables, and herbs. When I went grocery shopping for ingredients, I only had to visit two areas of the store, the meat department and produce, but getting all the food was only half the problem. I still had to cook it, and since there were no vegetable steamers and electric ovens to rely on 400 years ago, Thanksgiving's first cooks prepared everything over fire and hot coals — and so did I.

Over the weekend, I picked fresh herbs, stoked the fire, and invited some friends over to enjoy a very nontraditional traditional Thanksgiving dinner, and this is how it went:

Every Thanksgiving, I look forward to spoonfuls of warm, buttery corn, sweet potato pie, and several spinach dishes, most of them complete with cheese. Unfortunately, none of these were on the menu for the first Thanksgiving. Based on what was growing in the settlers' gardens and the contribution of the Wampanoags, it is safe to assume that there were plenty of onions, leeks, beans, and squash at the dinner table. Forget about marshmallow and brown sugar-coated yams, though, because the vegetables were most likely roasted in hot coals or boiled over a fire, not served with sugary sauces.

When it came to cooking the fresh vegetables for my own Thanksgiving recreation, it took about 20 minutes to bake the onions in the coals, and the leeks and beans on a grate over the fire. Everything came out looking a little burnt, but after peeling back a few layers of the onions and scraping the charred parts off on the beans and leeks, the vegetables were actually tender, juicy, and delicious. I had never eaten straight onions before (unless it was in the form of fried rings), but they turned out to be a smoky, bold veggie-based side dish my Thanksgiving has been missing all along.

Corn — But Not On The Cob

Today, corn is a traditional part of the Thanksgiving feast, but we don't eat it the same way they did at the first Thanksgiving. Instead of boiling fresh corn and eating it off of the cob or serving hot kernels in a mixed vegetable dish, a corn-based porridge was made from dried, ground Indian corn. To recreate it, I simply stirred in hot water to some coarse cornmeal (no, I didn't grind it down myself, but I briefly entertained the thought), and served it with some heavy cream. Though it didn't quite take the place of my mom's cheesy mashed potatoes, the corn porridge added a nice, warm, creamy side dish to an otherwise meat and vegetable-heavy meal.

Birds Of A Different Feather

While the first Thanksgiving dinner did include wild turkey, I chose to honor the other birds that the settlers and Native Americans served, including duck and pigeon. OK, so I didn't cook passenger pigeon — they are extinct, after all — but I got the next closest thing, which is quail. After stuffing both kinds of birds with chestnuts, chopped onions, leeks, and herbs, I slowly roasted them over the fire for about 20 to 30 minutes, turning them often to avoid blackening one side too much. If only I had a rotisserie stick.

Small but surprisingly delicious, the quail had a nice crisp skin and tender, juicy meat — just not a lot of it. Each guest ate at least two, and were still hungry for more.The duck was a little greasy and gamey, but the "stuffing" really brought out the bold flavor of the meat. Sure, my meal was missing turkey legs and brown gravy, but these birds still filled people's plates quite nicely.

In my house, stuffing isn't really stuffing unless it's made with cornbread and sausage, but 400 years ago, stuffing was an herb and vegetable-based dish. To make my own, I went out to the garden which, thanks to the unusually mild November weather in the Northeast, still had fresh parsley, cilantro, oregano, rosemary, and chives for me to pick. I added them to chopped onions, leeks, and roasted chestnuts, which the Pilgrims were fond of, and stuffed the duck and quail with this carb-free alternative to modern stuffing.

Though not filling — nor able to soak up loads of gravy that I didn't actually have — this Pilgrim-style stuffing was bursting with flavor. The herbs seasoned the meat throughout, but the chestnuts is what gave this stuffing its signature taste. Nutty and full-bodied, the stuffing went best with the duck breast, but it really complemented the entire meal, and I didn't even get a stomach ache after eating a second helping of it.

There are dozens of sides at Thanksgiving dinner, but have you ever had seafood as a major part of your holiday meal? I certainly haven't, but the attendees at the first Thanksgiving ate clams, mussels, and lobster, which they had an abundance of thanks to their proximity to the water. Though they would traditionally salt and dry the shellfish, which preserved it for longer, I opted to serve mine boiled.

A lot of work to make and to eat, the shellfish buffet was by far my favorite part of the Thanksgiving meal. It was nothing like what I was used to, and it felt more like a Fourth of July celebration, but cracking open a lobster by an open fire — one which was busy cooking the next round of shellfish — certainly made me feel thankful.

Never mind the holiday ham, the Pilgrims and the Wampanoag looked to the sea for protein. Fish commonly eaten in Plymouth, year-round and for Thanksgiving, were bass, trout, catfish, cod, bluefish, and more. Since I am a New England girl through-and-through, I opted for cod when it came to making my own Pilgrim-style Thanksgiving fish.

To prepare and cook my fish, I lightly salted the cod and smoked it over hot coals for about 15 minutes. The easiest — and quickest — thing I made all day, the cod had a very different flavor to it than what I am used to getting in restaurants, or even eating at my house. It was slightly dry with crispy skin, but still full of fishy flavor and a smooth, smoky taste. I craved tartar sauce, but since the Pilgrims didn't have any, neither could I.

Pumpkin Without The Pie

Though there weren't any pastries at the first Thanksgiving, there was still a pumpkin pie — well, sort of. For dessert, the Pilgrims filled a hollowed pumpkin with milk, honey, and spices, and cooked it over hot coals. The result? A creamy, pumpkin-spiced custard. Since I still had my pumpkin carving kit from Halloween, I thought I would try to recreate this delicious sounding treat, too. I did, however, add eggs to my mixture to help with the firmness of the dessert.

Confession time: my first attempt at a fire-roasted pumpkin custard was a complete fail. The coals were too hot, so a hole was burned right through the side of the pumpkin, out of which all of the custard mix spilled. My second try — this time in a mini pumpkin — produced a delicious and personal-sized dessert. The custard was bursting with pumpkin flavor and hints of cinnamon and nutmeg. It was warm, sweet, and the perfect way to end my feast.

Considering I live an hour away from where the first Thanksgiving was prepared and served, it surprised me that some of the ingredients were impossible to track down. Despite my best efforts, I was still missing a few major components to the first Thanksgiving meal: venison, plums, cherries, and eel. While the Pilgrims were gifted several deer from the Wampanoags, I could't find it at the three specialty stores I visited, and I didn't think I was qualified to try hunting one myself. The fruit I was missing, including plums and cherries, certainly populated the first Thanksgiving table, but unfortunately did not populate the produce aisle at my grocery stores. Though I could probably order eel in a restaurant, I couldn't track that down at any fish counter, but to be honest, I'm not complaining about that.

Despite what the meal was lacking, my recreation of the first Thanksgiving menu surprised and delighted me. As a seafood lover, I would love to reincorporate the clams, lobster, mussels, and smoked fish back into the modern Thanksgiving meal, but it is safe to say I never want a holiday meal without mashed potatoes, cornbread stuffing, or gravy ever again. Instead of unbuttoning my jeans and napping on the couch for an hour after dinner, the protein-heavy Thanksgiving I ate didn't leave me feeling sluggish or bloated. Though it took all day to cook, and I served and ate around six courses, I was still hungry after putting out the fire, so I went inside, turned on some TV, and ate some boxed macaroni and cheese.

For more Thanksgiving ideas, check out Bustle on YouTube.