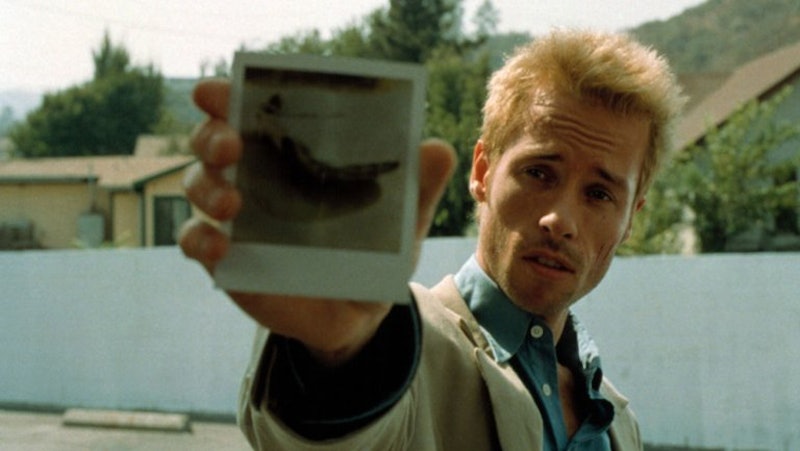 File this news under "What's the point?" Memento is getting a remake for absolutely no reason at all. The Hollywood Reporter says that AMBI Pictures will remaster Christopher Nolan's amazing 2000 thriller starring Guy Pearce as Lenny Shelby, a man with memory loss trying to find his wife's murderer, but it seems like a foregone conclusion that any such remake would never live up to the original, in my humble opinion. Why would the world need a redone Memento when we already have Memento?!

Monica Bardi, who heads up AMBI with Andrea Iervolino, said: "Memento is a masterpiece that leaves audiences guessing not just throughout the film, but long after as well, which is a testament to its daring approach. We intend to stay true to Christopher Nolan’s vision and deliver a memorable movie that is every bit as edgy, iconic and award-worthy as the original." It's certainly... a reason.

But you don't have to be a cinephile to know that any remake of Memento has impossibly high standards to live up to: even Bardi knows that, clearly. The film garnered incredible reception from viewers, critics and neuroscientists alike. It's a film that is challenging philosophically, making the viewer ask the same questions as Lenny: "What the hell am I doing here?" Here are seven reasons that Memento is unforgettable and why a remake is absolutely unnecessary:

Momento was the film that launched the career of one young Christopher Nolan. His signature style seemed already perfectly developed in this first thriller, and made him first an indie darling and now, fifteen years on, a box-office smasher with films like Inception, The Dark Knight, Interstellar, and older but equally as great films like Insomnia (2002) and The Prestige (2006). Christopher Nolan will NOT be on board for this remake, which basically makes it null and void. How are you going to make a remake of a quintessentially, groundbreaking Nolan film without the man himself? Bad idea.

And then there's this guy, Guy. He's inimitable as Lenny, waking up in a mysterious hotel room, literally trying to pick up the pieces. And Pearce pulled out all the stops for the role. The sequences in the film that are black-and-white (the chronological sequences) were unscripted; Nolan wanted a "documentary "effect for the black-and-white scenes, so Pearce improvised all of the dialogue. Dang! How is the Memento remake going to cast someone who can produce the same kind of off-the-cuff genius?

Christopher is not the only Nolan responsible for the masterpiece. His brother, Jonathan Nolan, wrote the short story that was used as the spine of the plot, "Momento Mori." He was nominated for an Academy Award for Best Original Screenplay for the work. The story was published after the film was released. If the remake of Momento wants to even hold a candle to the original, it's going to have to find a veritable creative genius to write the screenplay.

Obviously if you're a Memento fan you know the best part about the film, whether on your first view or your fifteenth, is the extreme confusion that the structure causes while you're watching. The interspersing of past and present, forwards and backwards makes you feel anxious. It's incredibly clever. If the remake wants to stay faithful to the original, are they just going to rip of Nolan's structure? That's not innovative or new! Plus, the surprise at the end of the film is such a mindblowing moment, and without that sense of anticipation, the thrill is gone.

5. The Problem Of Modernity

Unless the Memento remake is situated in a moment in time in the past, it's going to have some trouble with the central problem. If Leonard has an iPhone, he could solve the mystery in a snap. Even if he can't store recent memories in his brain, you know they're in the cloud somewhere, and that would break the cycle of searching for his wife's killer. If the movie is set in the present, Lenny wouldn't need to tattoo clues about John G. and Sammy and Teddy onto his body; he would just have to drop pins and edit his contacts. I'm not convinced.

Not only did Memento get rave reviews from film critics, but science loves it, too. Nueroscientists hail Memento as a rare film that accurately portrays the effects of the condition of anteretrograde amnesia, unlike other offerings like The Bourne Identity or the rom-com 50 First Dates, which, clinical neuropsychologist Sallie Baxendale says bears "no resemblance to any known neurological condition." If the remake can't remake that authenticity, it's toast.

Literally no way to top this polaroid developing backwards. Call curtains on this project now.