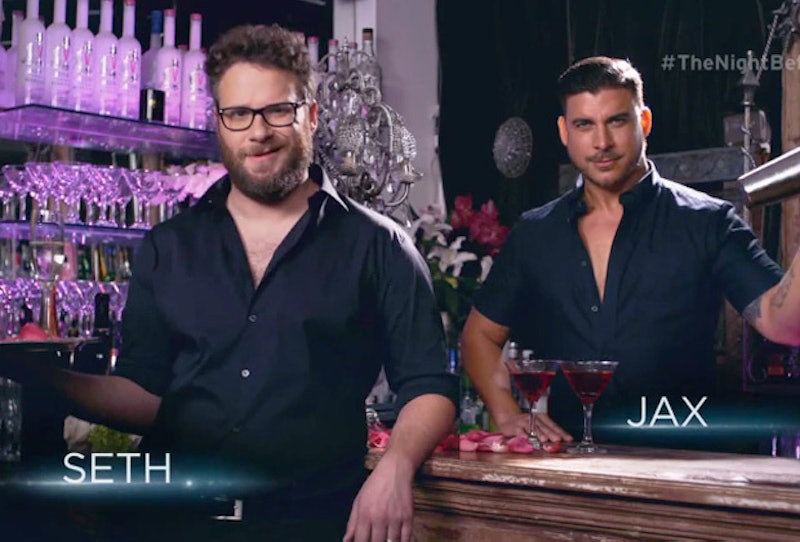 Step aside Jax Taylor, because it looks like Seth Rogen is going to replace you as a SUR bartender. The cast of The Night Before spoofed the Vanderpump Rules intro and it is the most glorious thing fans of the Bravo show will ever see. The show has never looked better. The new intro, which should totally air during every episode of Pump Rules, features Rogen, Anthony Mackie, Jillian Bell, and Ilana Glazer. Fans of the reality show will also notice a few familiar faces, including Jax, Scheana, Kristen, Peter and, of course, Lisa Vanderpump.

As Bravo reports, in addition to recreating the opening, the stars of the upcoming comedy The Night Before will actually go inside the world of SUR. This is not a joke. I repeat, this is not a joke. Apparently, a special will air on Thursday, Nov. 19 at 10:40 p.m. on Bravo. No other details were released about this unexpected special (am I dreaming?), except for Rogen revealing via Twitter that he and his co-stars "get drunk and have sex" with the cast of Pump Rules. Yeah, that sounds about right.

Whatever Nov. 19 brings, I can't wait. I'm sure it will be beyond entertaining. I just hope The Night Before cast knows what they're in for.