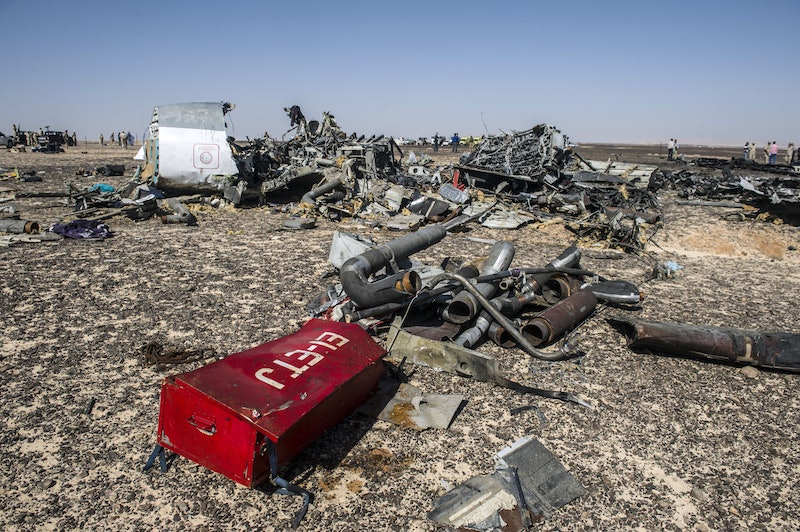 On Tuesday, Russia confirmed that a bomb caused Metrojet Flight 9268 to explode and crash in Egypt's Sinai Peninsula, killing all 224 people on board. Alexander Bortnikov, who heads the Federal Security Service, told reporters that the Oct. 31 crash was caused by a "terrorist act," and that a homemade explosive device obliterated the Airbus A321 midair. Shortly after the downing of the aircraft, ISIS claimed responsibility, saying the crash was in retaliation for Russia's airstrikes in Syria. It appears the Russian government's findings now corroborate the extremist group's claim.

While Egyptian authorities initially denied that terrorism was to blame, experts quickly honed in on the possibility of a bomb bringing down the plane. Russian President Vladimir Putin vowed to bring the attackers to justice. “We will search for them everywhere, no matter where they are hiding," he said in a televised meeting with his security council. "We will find them in any place on the planet and will punish them.” Russia is offering a $50 million reward for information on the plane attackers.

Russia has been conducting air campaigns both against ISIS and rebel groups to bolster Syrian President Bashar al Assad's control over the country. Putin said that airstrikes would continue despite the investigation's findings. "Our military work in Syria must not only be continued, but strengthened so that criminals understand that punishment is inevitable," he said.

Putin and President Obama were photographed at the G20 Summit in a deep huddle, reportedly discussing the extremist group in light of the attacks in Paris on Friday. Now it appears that Russia has an even bigger stake in the fight. The findings could strengthen an international coalition against ISIS, and be part of a shift in the world's strategy to stop the terrorist group.