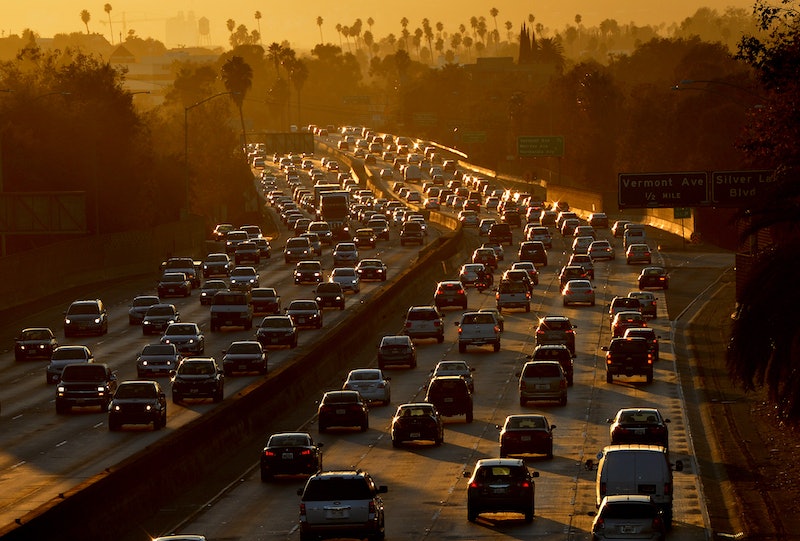 The biggest Thanksgiving decision you face — besides whether to go for roasted turkey or deep-fried — is when exactly you should hit the road to avoid being stuck in some serious traffic. No one wants to spend their precious holiday time in a car, especially when there's the promise of good eats at the end of your journey. Thankfully, Google Maps has plenty of data with which to provide some great tips to avoid Thanksgiving traffic this year.

Google Maps determined its trusty traffic conditions by analyzing the total number of cars on the road at any given time in 2014 from Android phones with location services enabled in 21 U.S. cities. The Maps app, which has more than a billion monthly active users, also looked at specific search trends within its platform to see what people were searching for. As it turns out, "ham shop" is the hottest destination on Thanksgiving Eve, while "buffet restaurants" is No. 1 for the day of. #SurprisedButNotSurprised

But never mind people's last-minute desperation for good ham. What about the important stuff, like staying out of the driver's seat for as long as possible? (Both literally and figuratively, because dammit, you already make enough decisions in your life.) Angelenos don't want to have to worry about whether to take the 5 or the 405 home (though I'm sure you already know the answer to that one). So let's dive in, shall we?

In general, the worst day to travel is, as expected, the Wednesday before Thanksgiving. If you're trying to hit the road between 3 p.m. and 5 p.m., then good luck, because that's pretty much the worst time possible. If you have to drive on Wednesday, your best chances are to leave before 2 p.m. or after 7 p.m. If you're lucky to get going on Tuesday, know that it's tied with Saturday as the second-worst day to travel.

Google gives the green light for Thanksgiving. The actual holiday is the best time to travel, with the least amount of traffic out of all the days in its week.

Black Friday also ends up being a pretty good day in terms of traffic, so if you're not busy shopping the crazy sales, this would be a good time to head to wherever you need to go. As mentioned before, Saturday is tied for the title of second-worst day for traffic. If you have a choice between going back to real life on Saturday or Sunday, opt for the latter. Saturday traffic can be up to 40 percent worse than that on the next day.

Who Has The Most Traffic

OK, I'm not surprised by this one. The top three worst cities for Thanksgiving traffic are Los Angeles, Washington D.C., and San Francisco. Los Angeles in particular has seen traffic get worse over the years, jumping from No. 11 to the top spot in just one year. Here's the full top-10 ranking:

And there you have it. Come Thanksgiving week, make sure you have these traffic tips handy, because there's nothing worse than craving pumpkin pie and not having it next to you. That's what will most likely happen if you're stuck in a car.

More like this
35 Ideas For 4th Of July Nails That Go Beyond Red, White, & Blue
By Audrey Noble
Kim Kardashian Father’s Day Tribute To Kanye West Called Him “The Best Dad”
By Stephanie Topacio Long
Dan Levy’s Father’s Day Pic Of Dad Eugene Spoofs The ‘Schitt’s Creek’ Vet’s Past
By Grace Wehniainen
Prince William & His Kids Are Adorable In A Smiley New Photo For Father’s Day
By Stephanie Topacio Long
Get Even More From Bustle — Sign Up For The Newsletter