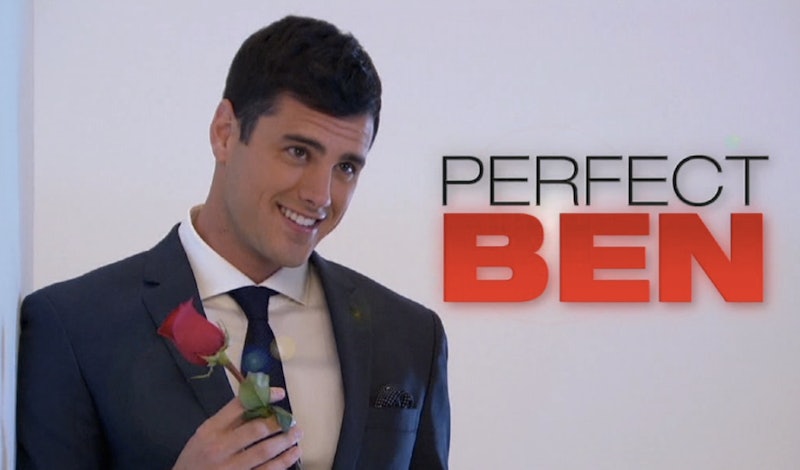 Bachelor Nation rejoice, because Ben H.'s season is on its way. There was basically partying in the streets when it was announced that actual Disney prince Ben Higgins would be the next Bachelor, although there were numerous rumors flying about that exact thing long before the official announcement. Ben H. has already charmed the world, both with his stint on The Bachelorette and with his interviews following the announcement of his Bachelor status, but now we have our first trailer for Ben H.'s Bachelor season, and you should probably get ready to fall in love with him all over again.

It looks like Ben H.'s season will be both surprising and unsurprising. It will be unsurprising, because we all already knew that Ben H. was a perfect 10. (And, if you didn't know, don't tell me about it, because I'm judging you and will show you the door.) His big smiles, like a kid who can't believe their luck, and the polite way in which he seems to interact with the women just make me wish that I had signed up for this season. The surprising part comes in when one woman steps out of the limo, and gives us our best limo entry, like, ever by having her twin sister step out with her in a similar outfit. That's right: on this season of The Bachelor, we have identical twins, and Emily and Haley are already throwing Ben H. for a loop, if this trailer is any indication.

The trailer also had one more pleasant surprise for us, and that was the revelation of the premiere date for all of this madness. We only have to hang on until Monday, Jan. 4 to get all of the twists, turns, laughs, and heartbreaks that come along with a new season of the Bachelor. (Or, if you're like me, to get all of the adorable smiles that Ben H. has to offer, that little peach.) Two months might seem like forever away, but I can be patient until then now that I have this trailer to watch over and over again.