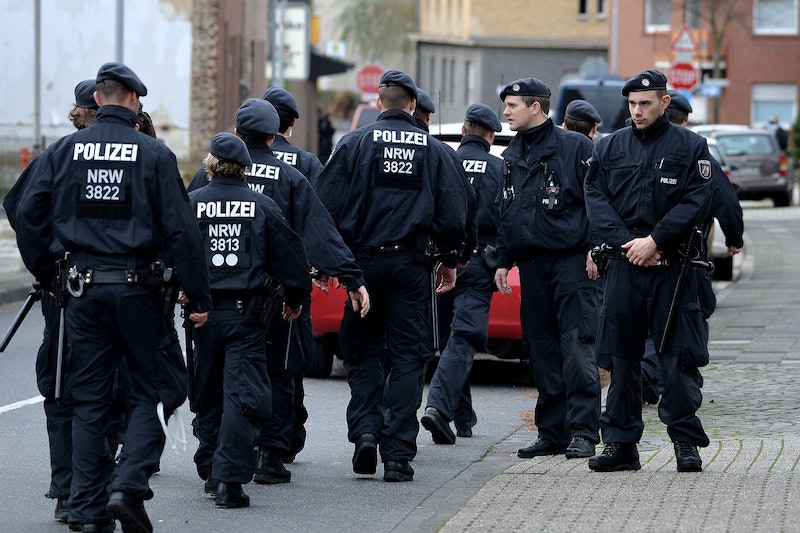 As French and Belgian police continue to hunt for suspect Salah Abdeslam, German police have arrested multiple people who may have been involved in last Friday's attacks in Paris. Along with one man, German police arrested two women in connection to the Paris attacks. On Tuesday, German police told local media that they arrested the three individuals in Alsdorf, a small town near the city of Aachen, close to where authorities were searching for Abdeslam near the Belgian border. As police continue to search for more suspects, what do we know about these two women who were just arrested? So far, they've been the first females to be associated with the Paris attacks.

On Tuesday, a spokesperson for Aachen police told the Associated Press:

After [receiving] leads, we arrested two women and one man.

According to information obtained by Spiegel Online, the women are lava M., 28, and Didem A., 32, and the man is Kamal A., 29. The trio was arrested by special forces after exiting a local job center Tuesday morning, after a local shop worker mistook the man for Abdeslam, who currently has an international warrant out for his arrest. All three suspects are foreign nationals. Police spokesman Werner Schneider told reporters (translated by Google Translate):

We have received indications that one of the fugitives in the context of Paris may be staying in our area.

He could not provide any further details, since the investigation is ongoing. An eyewitness speaking to German newspaper Aachener Zeitung reported seeing special forces wearing storm masks and carrying machine guns surrounding the apartment where the three suspects reportedly live in Alsdorf.

Later that day, German police arrested two more suspects, both male, in Alsdorf, making for a total of five arrests in the small town. Meanwhile, the manhunt for Abdeslam continues. The Guardian reported that more than 500 troops are currently patrolling the streets in Belgium, searching for the Brussels-born Abdeslam. Earlier in the day, Belgian authorities charged Hamza Attou and Mohammed Amri for participating in terrorist activity. The two men allegedly picked up and drove Abdeslam into Belgium early Saturday morning after the attacks.

Around the same time, a black Clio vehicle was found abandoned in the 18th arrondissement of Paris, where ISIS claimed an attack would happen — though one fortunately did not. Police believe the Belgium-registered car had been rented by Abdeslam and used to prepare for the attacks. Hopefully, the clue helps lead authorities to the eighth ISIS suspect.