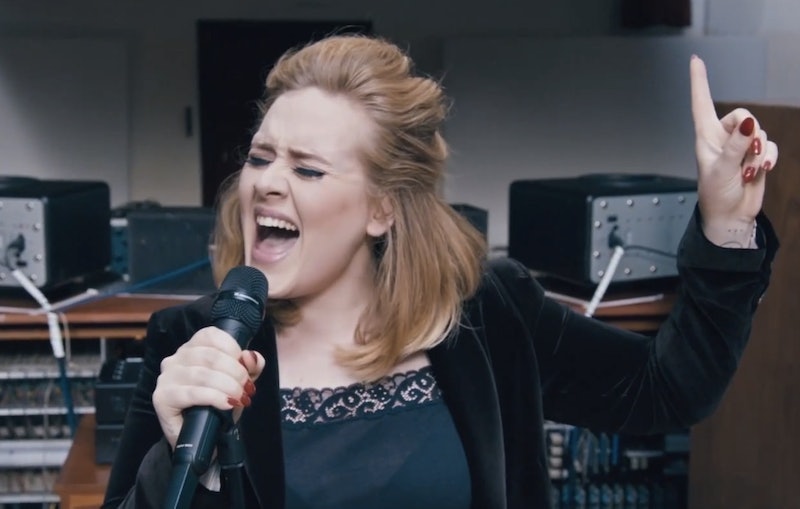 Since Adele released her single "Hello," anticipation has been huge surrounding when and where she would preview new songs from her forthcoming album 25. We're only three days away from the release of 25 (due out Nov. 20), and even though there's not much time left to wait to hear what Adele has dubbed a "make-up album" in its entirety, it's a total relief to hear another of her new songs. In a video of Adele performing "When We Were Young" live at The Church Studios, the singer is more than capable of giving us all chills and, well, making us think about our exes.

"When We Were Young" sounds totally different from "Hello" in so many ways, and the most exciting part about getting to hear and see this unique live performance is that it's only making clearer how amazing the record is going to be. If "Hello" made everyone remember the heartbreaks they'd suffered in their lives, and the apologies they wish they could make, then "When We Were Young" is about seeing an ex and realizing there might still be a glimmer of hope. And, as Adele's performance shows, the song is totally impassioned in remembering a person we knew at a time "we were sad of getting older" and felt "restless."

There's a wish in the song's lyrics that it would be possible to capture a moment with this person: "Let me photograph you in this light in case it is the last time." As always, Adele is super melancholy, but there's also the hint of reconciliation, of fondness, of being able to revisit a relationship, and a person, anew.

Guaranteed to give you all the feels, "When We Were Young" will make you reminisce about your past relationships, and all those moments when you catch yourself thinking about an old love you let go, who you wish you could just stand in front of for a second to see if there's anything there. Why not take Adele's advice and do what I did: look up that ex on Facebook, and see if they want to meet for a drink? Chances are they're still as much of an idiot as they were before, proving that Adele songs make misery seem beautiful. At least you can find out if they got hot since you broke up, and "When We Were Young" is the perfect soundtrack to that moment. Watch Adele's performance in full above.