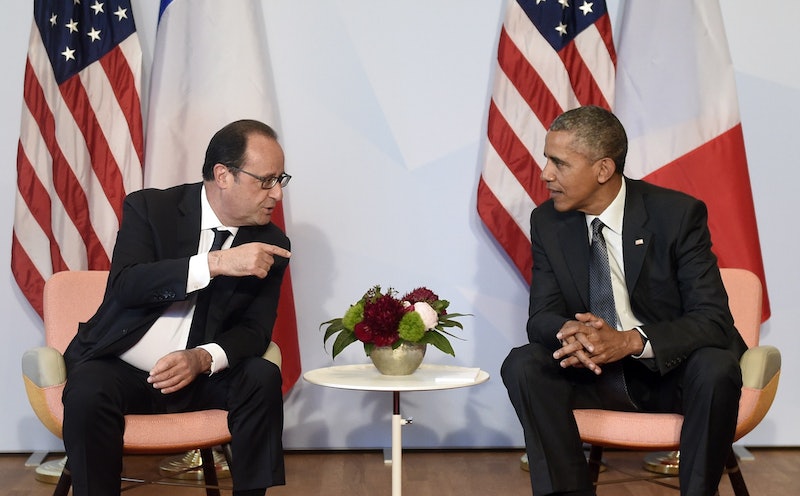 Following the attacks in Paris on Nov. 13, which left at least 129 people dead and hundreds more wounded, French President Francois Hollande is coming to Washington, D.C. on Nov. 24 to meet with President Obama. On Nov. 26, Hollande will then move on to Moscow, where he will meet with Russian President Vladimir Putin. U.S. Secretary of State John Kerry met with Hollande in Paris on Tuesday, Nov. 17. So what is Obama and Hollande's professional relationship like? On Monday, Hollande said he hopes his upcoming meetings with Obama and Putin will "unify our strength and achieve a result that has been too long in coming."

The pair has a history of working together — though after the attacks, some have claimed that Obama isn't taking as harsh a stance on ISIS as Hollande. The New York Post's Andrea Peyser wrote Monday that "Hollande is making Obama look like a fool." After ISIS claimed responsibility for the coordinated suicide missions on Friday, Peyser claimed that Obama hesitated to acknowledge that the terrorist group was actually responsible, while Hollande was quick to criticize them by name, calling the attacks "an act of war." And at a press conference this weekend, Obama said that the United States is "going to continue to pursue the strategy that has the best chance of working, even though it does not offer the satisfaction, I guess, of a neat headline or an immediate resolution."

Still, there's no evidence that the alleged dispute between Hollande and Obama over ISIS is an actual fight. The two have worked together plenty of times in the past, and the presidents appear to have a strong relationship.

Last week, Obama and Hollande discussed the Paris climate talks, and the pair both attended last weekend's G20 Summit in Turkey, along with other world leaders. The two spoke on the phone on Friday, Nov. 13 after an alleged rift between the United States and France over the Paris climate accord. The reported disagreement involved whether the accord would be legally binding, after remarks Kerry made suggested the United States favored a non-binding approach. The White House clarified that this was not the case. And in June, Obama and Hollande met during the G7 Summit in Kruen, Germany, again speaking about the Paris climate talks, which will begin Nov. 30.

Obama and Hollande seem to have a successful working relationship, even if the United States and France don't always agree on international issues. As the pair meet to discuss ISIS and the Paris climate accord, there's no reason to believe the two will be anything but professional and cordial with one another. They're both committed to finding a climate change solution and stopping ISIS, and their continued meetings and conversations show this.