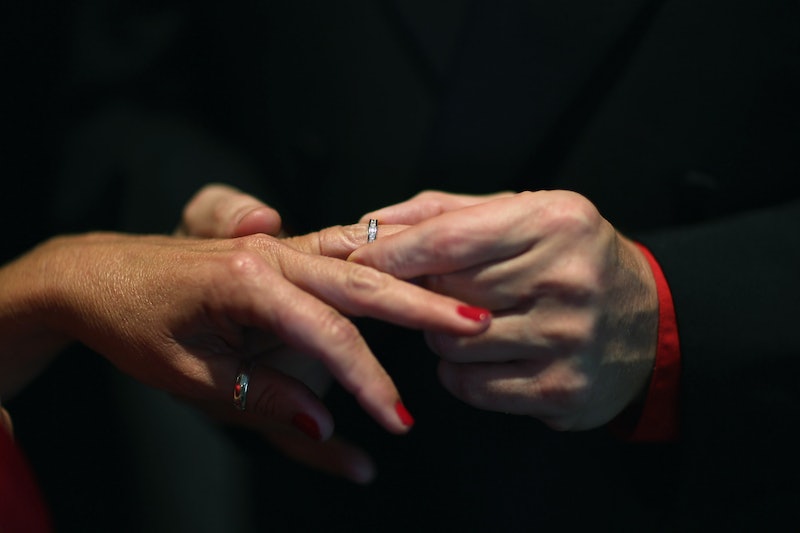 How much do you really know about alimony? If you haven't experienced the payment process, it might seem like a confusing or outdated practice. With more and more women in the workforce, why are their ex-spouses paying them after the divorce? Alimony is more than men paying their ex-wives, though. A new Reuters investigation looks at the lives of working women who hope to achieve alimony reform because they're being forced to pay their exes. Three percent of all alimony recipients are men, and for women making alimony payments, this is an important women's rights issue.

Three percent may not seem like a huge figure, and women paying their ex-husbands have realized that the system is "heavily weighted toward men paying women," as Reuters notes. And some people believe that receiving alimony isn't great for women, either. Forbes' Emma Johnson believes that ending alimony payments would help women, whether they're receiving payments or giving them. Johnson, like many advocates for alimony reform, explains that ending alimony payments would force people to be more financially independent. She explains that suffragettes fought for women to have the same rights as men — and that includes being financially responsible for taking care of themselves after the end of a marriage.

Alimony, which is also referred to as spousal support, is when the higher-earning spouse pays more money to the lower-earning spouse after divorce. To make alimony judgments, courts look at the income levels of both spouses, including things like dividends and royalties in addition to salaries. Marriage length is a factor, too — in some states, like California, the length of the marriage will affect how long an ex-spouse is required to make alimony payments. California law also requires that alimony payments end if the spouse receiving them is remarried.

Ken Neumann, a founder of the Academy of Professional Family Mediators, told Reuters that alimony payments are unfair to both men and women, but the rising trend of women making alimony payments has brought the issue into more discussions of gender equality. "It’s unfair for men to pay it, and unfair for women to pay it. But women are much more outraged by it," Neumann told Reuters.

In the 1979 case of Orr v. Orr, the Supreme Court ruled that alimony regulations must affect women and men equally, invalidating the rule that men must pay alimony to women, but not vice-versa. But women paying alimony to men is still fairly uncommon, and in such cases, it's difficult to make sure that these women are being treated fairly. Many women advocating for alimony reform don't want to make payments to their ex-husbands, which they see as an unfair burden. "There's no other contract where the liability continues after the contract ends," Tanya Williams, who has paid alimony to her ex-husband for 13 years, told Reuters. "You can't leave your job and say, 'I still have a need, so you have to continue to pay me.'"

Judith McMullen, a law professor at Marquette University, told Reuters that alimony has become less common over time. Today, alimony payments are usually granted to help those who aren't able or prepared to enter the workforce after a divorce. For example, some states, including Kansas, Massachusetts, and Texas, are implementing programs to help lower-earning spouses reenter the workforce or gain education. And as Reuters points out, between 90 and 95 percent of alimony cases are settled out of court, making court-ordered alimony judgments more rare than they were in the past.

Still, while a number of states have reformed their alimony laws in recent years, many advocates feel that there hasn't been enough progress on the issue. One place alimony reform advocates want the process to start is a ban on lifelong alimony payments, since not all states have time limits on the practice. And as Reuters notes, alimony reform may not help the people already involved in the nation's thousands of current alimony cases. "You have to wait for [the ex-spouse] to die, essentially," Neumann told Reuters.

Today, many women — including married women — are essential parts of the workforce, and may out-earn their partners or spouses. Alimony reform would help both men and women who are divorced, and it would help states bring what many see as outdated laws up to speed. To learn more about alimony reform in your state, check out Alimony Reform's list of local chapters.